The Administrator of Kogi LGC, Hon. Muhammed Tanko Musa Osuku on Tuesday played host to Bassa Kwomu community from Kogi Local Government Area of the State, on a courtesy visit to his Lokoja resident.

The Bassa Kwomu delegation was led by the supervisory councilor for Health, Hon. Jibril Idris and their spokesperson Comrade Gabriel Ndazhaga.

In their address read by Comr. Gabriel Ndazhaga, the Bassa people congratulated Barr. Tanko on the just concluded November 16 gubernatorial and Senatorial electoral victory recorded in favour of ruling All Progressives Congress (APC) in the State, describing the victory as true reflection of the wishes of Kogi electorate.

He said the Administrator has shown capacity, dexterity of purpose and determination through his numerous life touching programs and policies which has placed his administration as one of the best in the state.

He commended the council Boss for his foresight in the provision of infrastructure, security of life and property and human capital development

While thanking the Administrator, the group urged him not to relent rather continue with his laudable program that has direct bearing to the people of Kogi LG.

“We have collectively resolved to work for your election in the forthcoming council poll. We were able to drum support of our people from the three Zones that made up Kogi LGA, which are, Zones A,B and C.

“God as faithful as He is, gave Kogi people good Governor and coming to the grassroot level God gave us the Administrator in person of Barr. Tanko who is never tired of providing services to his people.

“To us you’re not just an aspirant but a winning and unbeatable candidate. We are so proud to aligned our interest with you and your good leadership style. Leadership is all about service to the people and our people have gained so much through you. ”

According to Ndazhaga , they have members across Kogi LGA, but have collectively resolved to support his candidature from Zone B in order to sustain and maintain the existing zoning arrangement in the council in the interest of fairplay equity and justice.

Responding, Barr. Muhammed Tanko Musa Osuku, thanked the Bassa Kwomu community for finding him worthy to support, described Bassa people as friend of new direction, particularly his administration where one of them is presently serving as supervisory councilor representing a ward in the council.

Barr. Tanko reiterated his administration commitment to ensuring peace and development in line with Governor Yahaya Bello’s vision to transform the State to an enviable heights.

He promised never to let them down as he assure of his continues support to the welfare of the entire people of Kogi LGA in general.

“What you have seen is just the beginning more are coming your way. and, all I need from you is for you to remain supportive to the administration of Governor Yahaya bello, his deputy Chief David Edward Onoja.

“I will continue to be in the forefront for good governance where the people will feel the impacts”.

According to the Administrator, some so-called Chairmanship aspirants resorted to selling themselves as Chairmanship Aspirant in Kogi LG during the Guber campaign.

He described the situation as an embarrassment not only to APC but Kogi LG in particular.

“Since that is over we can now go to next stage which is the council poll and ready for the task ahead.” Barr. Tanko said.

In line with vision and mission of Kogi State Governor, Alhaji Yahaya Adoza Bello to bring more developments to the state and consolidate on Human Capital Projects, Kogi Investment & Properties Limited ( KIPL) has enter into partnership with an Abuja base Construction Company towards building a befitting Housing Estates and Shopping Malls in Lokoja, the State capital.

The CEO/MD of Kogi Investment & Properties LTD, Hajiya Aishat Suleiman, recently hosted the investors of the Management of the construction company, expressed her commitment in ensuring proper utilization of her office to influence more investors to complement the state government efforts on the developmental footprint and job creation.

“Once we are done with this projects we are about to embark upon in partnership with MC Dream Concept LTD, it will create more employment for the citizens, generate more opportunities add to beautifications of the State capital, it will increase the State IGR, and of course, attract more investors into the state,” Aishat stated.

On his part, the CEO of Dream Concept LTD, Engr. Ismail Zubair who spoke on behalf of the company delegation presented the sketches on how the smart homes will look like before and after completion, and further expressed their willingness to execute the project at an accelerated rate.

Engr Ismail further described kogi as a state naturally endowed with mineral resources, and it’s links over ten neighboring states of the federation including FCT, Abuja.

“On behalf of MC Dream Concept, Engr Ismail assured his contribution and innovative ideas to make the state a befitting and conducive environment for settlement and it will definitely encourage more people across the country to acquire houses in the state as soon as they are done with the projects”.

“I am very much optimistic these projects are attainable in Kogi State, and by the time we finish with it, people will rush us. We will provide a smart home where you will have access to interact with your homes anywhere in the world, and a Shopping Mall that will encourage Youth to be fully engaged with meaningful work, and its structure will compete with most modern houses and Mall in the Country”, Engr. Ismail said.

As part of efforts to rally round some stakeholders in Nasarawa west for youths inclusiveness in governance the Youth Coalition in Nasarawa West for Sociopolitical Development last week tours five local govt and development areas in the State, a development that was welcome ahead of a one day security summit planned to hold at keffi, the headquarters of the zone.

The leadership of the coalition has met in what could better be described as interactive meeting with Executive Chairman of Nasarawa State Primary Health Care Development Agency, Dr. Usman Adis in his office in Lafia, Thursday.

Presenting the mission of the coalition, the chairman, Comr. Ganuwa Baba sunusi, told the Executive Chairman that the youths organisations in the zone were emotionally touched by the way some of their age brackets are myopically and mysteriously used to perpetrates evils at the detriment of the generality of the people of the zone; particularly the lingering insecurity, drug abused, rape and other related common social vices among the youths.

Comr. Ganuwa added that the coalition is set to start the sensitization campaign across the council and development areas within the zone, with the aim of reminding the youths on their obligatory responsibility of being the community security vanguards and to charge them on taking the vigilance of their security situation; aside the call for active participation in politics and in governance.

The coalition leader reiterated the youth appeal on the need to allow some elective positions like State House of Assembly membership, Chairmen and Councillors of Local Government and wards as well as over – seers of development areas for youths as starters.

Appreciating the foresight of the youth in that direction, the Executive Chairman, Nasarawa State Primary Health Care Development Agency, Dr. Usman Adis, charged youths to be proactive and take direction on learning relevant vocational skills and taking chances on involving more on medical and science related professions to avoid the engagement of foreigners in the nearest future as consultant on what could better handled domestically.

Dr. Adis attributed lack of youth picking interest on skill acquisition and other meaningful ventures as a factor responsible for thuggery and other social menace in the society; charged the youths to see every opportunity around them as lucrative, hence the need to utilise it accordingly without any beaming on any mode of hesitation.

While promising to support the coalition movement in the zone, Dr. Adis said as youth Ambassador from the zone, he will continue to do his best on the assignment given to him by the state Government, especially on how to better and ensuring professionalism in the state Primary Health Care Centers; urging the youths to also take responsibility of their respective health centers across the state for better service delivery.

Highlights of the engaged courtesy visit was the exchanged pleasantries and a group photographs.

Service To Humanity: Maikaya Foundation Honour Again With Another Award Of Excellence 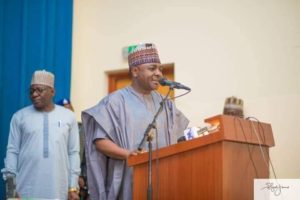 Maikaya Development Foundation, one of the most impactful NGOs in the sub-Saharan Africa yesterday bagged award of excellence for the humanitarian services been rendered to the less privileged in Nigerian communities and beyond.

A statement from Rt Hon Shuaibu Sani,
Chief Operating Officer of the foundation said, It is no longer news that Maikaya Development Foundation is a non-profit organization working round the clock to improve the social, economic and health wellbeing of individuals and communities at large with key focus on peace, economic empowerment for women and youth, health and education. We have been touching the lives of people and communities irrespective of ethnicity, religion, gender or political affiliation. This is in line with the sustainable development goals (SDGs) which are built on the principle of “leaving no one behind”.

“It is on this basis that the NATIONAL YOUTH SUPPORT GROUP (FACE OF DEMOCRACY NASARAWA STATE) found us worthy to be awarded amongst other top government functionaries, philanthropists, captains of industries”.

His Excellency, Alhaji Dr. Muhammed Musa Maikaya, (Ciroma Toto) is the Grand Patron of the foundation and former gubernatorial aspirant on the platform of APC in Nasarawa State.