“Nasarawa Governor Assures CAN Of Religious Tolerance, Says “I’m Governor for all”,

Governor, Abdullahi Sule of Nasarawa state has assured Christians that he is Governor for all citizens irrespective of religious beliefs.

The Governor barred his mind while hosting the leadership of the state chapter of the Christian Association of Nigeria (CAN), who paid him a courtesy call at the Government House in Lafia on Tuesday.

Engineer Sule emphasized that he is Governor for all, be it Muslims or Christians, stressing that he strongly believe that the world was created for every one to leave in peace with each other.

He noted that though he is a devoted Muslim from a devoted Muslim home, he still remains a student of Christianity, having attended a Catholic primary school in Gudi, his country home, as well as stayed in a parish while attending university in the United States.

Engineer Sule said he is not the kind of person who will criticise or say anything negative on other religions.

While thanking the leadership of CAN for paying the visit at a time when Christians are celebrating the birth of Jesus Christ, he said for the rest of his life, would works to see how people will live in peace with one another and how they can become independent in life.

Earlier in an opening remarks, state Chairman of CAN, Bishop Dr. Joseph Masin, said the purpose of the visit by the representatives of the entire Christians in the state was to show appreciation to the Governor for being Christian friendly.

“I bring you the Christmas and New Year greetings on behalf of the entire Christian community in Nasarawa state.

“We are glad that you are able to spare a moment from your tight schedule, a special time to see us, to come today as representatives of the entire Christians in Nasarawa state to appreciate you for being Christian friendly,” the CAN Chairman said.

The CAN chairman used the opportunity to show appreciation to the Governor for carrying the Christian community along.

“We specially want to thank you for increasing the number of pilgrims this year. We thank you again for finding time to visit our secretariat and other places of worship in Lafia.

“We thank you for supplying rice to the state CAN, as well as women and youth wings of CAN across the 13 LGAs for Christmas celebration. We want to thank you for expanding the horizon of learning in the Nasarawa State University by siting a faculty of engineering in Gudi.

“We thank you for your plans to industrialize Nasarawa State, we pray that this your dreams will become realities. This will create employment as well as place Nasarawa state in the position of the best states ever, another Singapore, Malaysia and Dubai in Nigeria,” Bishop Masin stated.

Nasarawa Speaker Rejoices With Emir Of Lafia As He Clocks One Year On throne, Describes His Reign As Peaceful, Eventful. 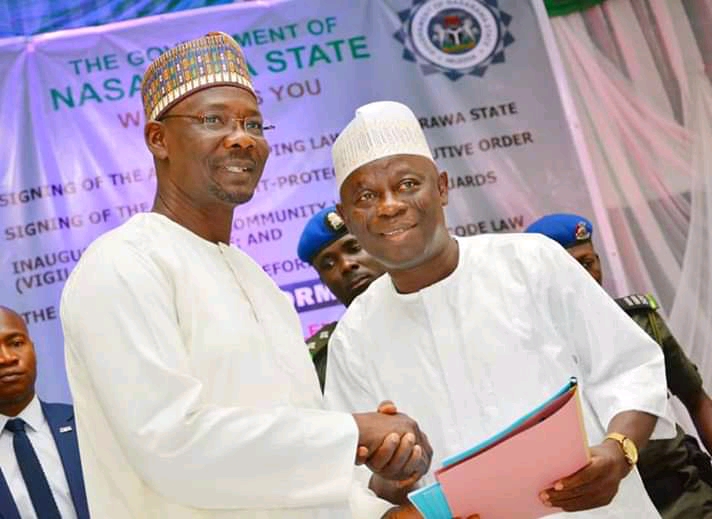