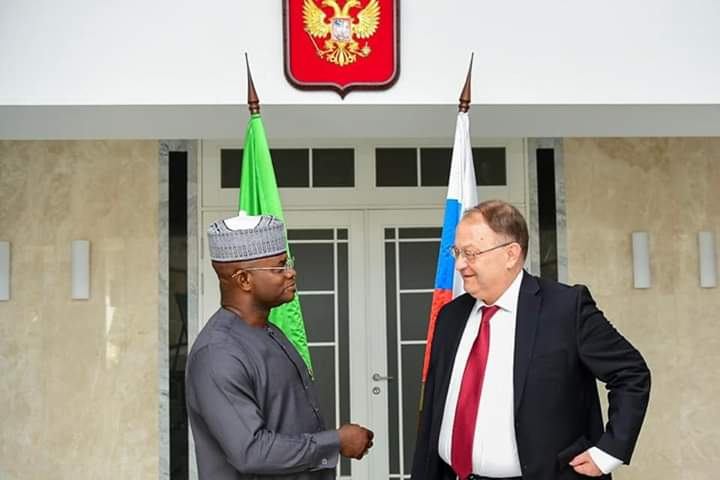 With the high expectations by the government and people of Kogi state over the resuscitation of the Ajaokuta Steel Company, Kogi State Governor, Alhaji Yahaya Bello on Monday paid a courtesy visit on the Russian Ambassador to Nigeria, His Excellency, Alexey Shebarshin at the Russian Embassy in Abuja for discussions ahead of the planned completion and revival of the Steel Complex.

According to the Chief Press Secretary to the Governor, Onogwu Mohammed, Bello said his visit to the Russian Ambassador was to convey the goodwill message of the people of Kogi state to the Russian Government through its embassy for the Oct 22, 2019 Sochi Agreement between the Russian and Nigerian Governments to revive Ajaokuta Steel Company Limited.

The Governor assured the Ambassador of the readiness of his administration to see that the Ajaokuta Steel Company is fully revived and works in the interest of Kogi people and Nigeria at large.

He commended President Muhammadu Buhari for taking up negotiations with the Russian Government to revive the steel company, pointing out that the Ajaokuta steel company will make Nigeria the industrial hub of the world.

The Russian Ambassador, Shebarshin assured the Governor that the Russian Government was fully ready to complete the steel complex following Mr. President’s visit to the Russian President Vladimir Putin in October last year.

He said they were now waiting for the Nigerian Government to put its house in order, to sign the Memorandum of Understanding (MOU).

Coronavirus Finally Has A Cure.

Iran Vs USA: They’re Fill With Hate And Indulge In Terrorism,...

Initial Reports of No Injuries from Iran’s Attack Were Inaccurate