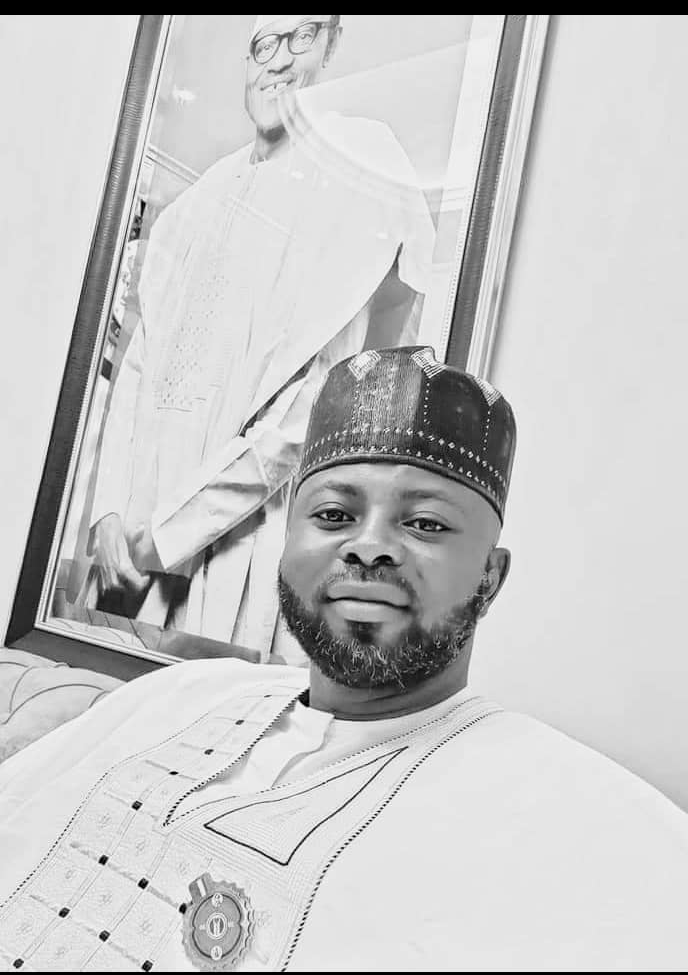 In his bid to provide dividends and as ensure security of life and property to the good people of Okehi Local Government Area and its environ, the tireless, workaholic Administrator, Hon. Abdulraheem Ohiare has deem its fit and necessary as a leader who is ready to lead, serve and not to be served.

Another thing about him again is, he is a kind of leader full of humility who has throw away pride to embrace all and sundry without religion, tribes and party sentiment.

Below are part of his many leadership qualities Hon Ohiare, the Chief Administrator of Okehi LG.

The Chief Administrator of Okehi local Government, has sacrifice so much to achieve much for his people a direction he said has been his guide. As an intelligent, energetic young man, bless with prerequisite wisdom to serve his people selflessness without fear or favour, the council boss has demonstrated his ability, capacity on two districts with rich cultural heritage over the years where Hon Abdulraheem Ohiare was able to manage his domain with his youthful age without allowing power to over shadow him rather shows more capacity and extreme humility and commitment on every one who crosses his part.

On His Stewardship:
Ohiare led Okehi LG Administration has brought unprecedented development which are not Audio/Video rather visible dividends spread all over the council for all to glance at.

On Humanitarian Service:
Hon. Ohiare has used his God given position to touch lives positively through his open door policy and many life has been changed in his magnanimous towards providing Succour to the needy, vulnerable and has also upset medical bills of those with health challenges.

On Security, Law And Order:

In history of Okehi LG, Ohiare became the first Administrator in Kogi State to have built a befitting Police station for his people with aimed of complimenting conventional security operatives efforts to curb all sort of crimes in the area. It is also on record that Okehi LG formally have a security post but due to his quick intervention the council presently have the Area Command Office situated in Okehi and Adavi Police Division respectively.

On The Council IGR:
Hon. Ohiare has demonstrated his potentiality through popular Modern Trailer and Cattle Market located in Abobo and the story has been a success one.

Infrastructure:
The Administrator has order renovation and total overhauled of Okehi Local Government Printing Press to a modern standard with modern technology gadgets in order to meet up with demands.

In his contribution to promote economy stability and ensure provision of electricity in his domain, Hon Ohaire, people’s friendly Administrator purchase Electricity transformers to boost electricity supply is some area such are, Abobo community and Okaito, Omavi and Oboroke and Ohuepe.

Others include, purchased of mattresses for serving NYSC members and renovation of coppers lodge to a befitting standard.

Ohiare has done so much for his people but just to mentioned few, many has described Hon. Ohiare as a God’s sent serving to come rescue his people, redefined leadership and laid a solid foundation the future.

One good term deserved another and Hon. Abdulkareem Ohiare has taken Okehi Local Government to the next level of prosperity. Support him for Executive Chairmanship position.

King Habib, is the Media Aide to Okehi LG Chief Administrator, writes from Okehi and hail from Okehi LGC.

In a bid to maintain harmonious coexistence among his subjects, the Ohimegye Igu, His Royal Majesty, Alhaji Abdulrazaq Sani Isah-Koto on Friday, resolved a long standing disagreement among the residents of Ozi which was occasioned by social and economic deprivation of some bonafide members of the community.

The paramount ruler who invited the disputants and relevant stakeholders to his palace for amicable resolutions on the contentious matters of social and economic activities,  prevailed on all parties to agree on reasonable sharing formula in the interest of peace and progress.

He counselled against cornering common wealth to cause disunity and turning brothers in Ozi community against each other.

In his remarks, Senior Special Assistant on Local Government and  Chieftaincy Affairs to the Governor,  Barr. Muhammed Tanko Musa  commended the Ohimegye for his royal wisdom as  shown  in his fatherly ruling on such crucial matter that affects the lives and properties of the people.

Barr. who is Danmasani a traditional tittle in Kotonkarfe stated further that the fatherly role the Ohimegye played will go a long way in entrenching peace and harmony among the people of Ozi and should be emulated by other communities.

Similarly, the Danmasani Koton-Karfe and Head of the peace committee on Lakwo land submitted an Interim Report on the dispute between Onzo and Osuku communities to the Ohimegye.

It will be recalled that following disagrees between the Onzo and Osuku communities over farmlands, the Ohimegye Igu, Alhaji AbdulRazak Sani Isa-Koto, assigned one of his traditional tittle holders, the Danmasani to preside over a committee to promptly wade into the matter for amicable resolution.

READ:  Supreme Court Judgement  On Imo Governorship Election Is Groundless And Should Be Reversed -- PDP NWC

The interim report though not read out, is said to has dwelt on the achievement of the much needed peace and agreement to negotiate on the disputed lands.

Barr.Tanko, while submitting the interim report, urged the Ohimegye as the father to all sons and daughters of Kogi LGA not to allow some selfish elements to divert his attention from the course of justice he has already taken, stressing that he has every right to pass Judgement that will keep his people under the peaceful atmosphere.

In his remarks, the former member Kogi state House of Assembly, Hon. Barr. Tanko Abdulrahman Ozi, who represented Kogi/Koto constituency, lauded Ohimegye Igu on the ruling and described his benevolence to his people as gift from the Almighty God. He added that the royal ruling passed by paramount ruler is a testimony of the originality of his true personality, and prayed God to sustain His Royal Majesty to witness more years on the throne.

His Royal Majesty, Ohimegye in his ruling advised the people of his Kingdom, to always show kindness towards others, their family and the entire Kogi LG. He noted that there will be no development in a rancorous society and therefore sue for peace, unity, and love for one another.

The Monarch frowned at the attitude of those illegally claiming ownership of community land at detriment of others urging them to desist that such attitude will breed underdevelopment.

He thanked the former Administrator for presenting him with an Interim Report on Lakwo Land urging him to keep up doing the good job for his people. He further reassured him of his continued support.

I would have loved to be silent on anything that has to do with politics mostly in my dear Kogi state but on this I must voice out.

If there is one desire I have always hoped for before the emergence of Governor Yahaya Bello, was a revolution where the youths will take over the leadership of the state and steer it for a better and great Kogi State of our dream.

Your Excellency Sir, if not for anything you have won my support and loyalty. You have me as your own from the Eastern part of the state, Hon Abdulmumin Danga has won my love for you through his stewardship and giant strides recorded in my district mostly my village.

At about 9:15 a:m one faithful day sitting gently under tree when a group of youths arrived my community which is about 30 minutes drive away from Dekina town, I hardly identify between the commissioner and his fellowers, very simple, calm, intelligent and committed.

On approaching us, the commissioner for water Resources said” Good Morning all and we gently replied the August visitors, am here to do my job as directed by my Boss who appointed me. He has given me a marching oder that no community in Kogi state or citizens deserves to suffer for Water, on this note am here to sink over five Boreholes for you all in this community and I shall inspect this job myself.

Hon. Danga putting smile on the faces of Kogi Youths

What an astonished moment, I was speechless but the heart was full of joy. I look at the clouds and said, God bless Yahaya Bello and Abdulmumin Danga as my generation shall remember them for good and posterity shall judge them for good.

On this note, the geologist imidiately took the bool by horn, they heat up with their survey in five different flash point and work is about to commence. My community will soon witness a giant strides were the old and the young will stop trecking for minutes to access water from the stream.

Earlier there was the good news that heat up the polity about BILIVISCO company which is about to change the tune of Kogi central through Osara dam, what a project by His Excellency Alh Yahaya Bello and Hon Abdulmumin Danga… Your ministry is working Sir.

You deserve an accolades, the youths and indeed kogi east are proud of you.

Barr. Tanko playing host to Gbagy community in Kogi LGA who visited him on Friday in Lokoja.

The meeting held at his Lokoja resident, and the delegation has in attendance elders, youths, women and community chiefs who have comes in Solidarity to Familiarize, support and pray for him in order to succeed in his new office and his interest to contest the forthcoming council election to continued selflessly serve his people.

Mr. Moses Bawa from Tawari community is the leader of the delegation, supported by Mr. John J. P Gazhaki, in his address, described Barr. Tanko as a man of his word, honour who command respect from all the tribal extractions in Kogi LG.

He said they were in his resident to formally inform him of their plight in Kogi LG which needed to be address urgently for ease of administrative representation, dexterity of purpose, unity and Development of the council.

The group Appreciated the efforts of Barr. Tanko for wholeheartedly accommodating all irrespective of tribes, parties during his days in office as the Administrator of Kogi LG and their resolve to overwhelmingly support him stand a better chance ahead of others having been trusted, tested tried and proven.

According to him, only what is needed is to ensure the Gbagy’s are given opportunity to serve as it was done to others tribes in the area.

Pleaded with him to use his good office to consider the Gbagy’s chiefs for staff of office in their various community which if succeeded will guarantee more unity, peace and spirit of togetherness. He said.

In his response, Barr. Muhammed Tanko Musa, expressed joy at the caliber of persons who have joined the delegation to visited him today, saying that he is very confident and convinced beyond doubt that the good thing is about to happened in their land. He call on all and sundry to be United and build on the love which is currently prevalent within the Gbagy’s race, assuring them that the government of Alhaji Yahaya Bello is already in the picture of Kogi LG politics.

Tanko who is also the Immediate past Administrator of Kogi Local Government Area described Gbagy’s extraction as a peaceful people who coexist peacefully with others tribes in the council and always talk about development wherever they found themselves.