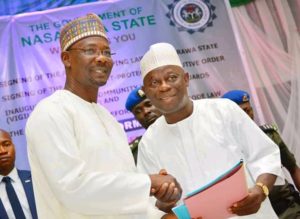 Inline with his vision to combat criminality in the state, Nasarawa State Governor Engineer Abdullahi Sule, has inaugurated a committee on community policing, the Community Volunteer Guards (Vigilante) Committee, as well as the Penal Code Reform Committee.

Inaugurating the two committees at a combined ceremony which held at the Taal Conference Hotel, Lafia, on Wednesday, Engineer Sule said it was in furtherance of the commitment of his administration to complement the efforts of security agencies in securing lives and property of the people of the state.

He noted further that it was also intended to ensure emerging crimes and criminality are curtailed and contained.

Engineer Sule disclosed that he earlier directed the state Attorney General and Commissioner for Justice to put in place necessary machinery for the constitution of the Volunteer Guard (Vigilante) for the state and local government areas, in line with the domestication of the amended Model Penal Code of Northern Nigeria 2015.

The Governor recalled the recently held North-Central security summit, where the security situation of the zone and country at large, were reviewed, with solutions proffered towards addressing the security challenges confronting the zone.

He explained that, it was against that background that his administration decided to take deliberate steps in order to secure the state and to ensure that law and order are maintained at all times for socio-economic development of the state.

While noting that it has become necessary to develop a policy framework for security sector reform, with a view to incorporating security actors in the formal and informal sectors, including the community policing policy into national security architecture, Engineer Sule stressed that the Volunteer Guard is expected to complement the effort of state security agencies, especially in rural areas.

Earlier, state Attorney General and Commissioner for Justice, Associate Professor Abdulkarim Abubakar Kana, pointed out that the Penal Code Law of Nasarawa State was inherited from Northern Nigeria enacted in 1959.
He described the law as impracticable, particularly in the face of contemporary realities and modern crimes, explaining the constitution of relevant stakeholders and renowned scholars in law to draw up a Penal Code Law that meets the need of the present times.

Associate Prof Kana disclosed that the Nasarawa State Community Volunteer Guards (Vigilante) Law was signed into law in 2004 but was never implemented fully, leading to proliferation of vigilante groups without guidance and code of operations.

He pointed out that while records indicated that community vigilante groups in the state have become major partners in crime prevention and peace building, there is however need for proper coordination, explaining why Engineer Sule approved the composition of the members of the State Coordinating Committee, in line with the provision of the law.

Chairman of the CVGC and state Commissioner of Police, Bola Longe, in a vote of thanks, commended the Governor for being the only one in the country to set up a committee on community policing, promising, alongside other members of the committee, to effectively carry out their mandate and to ensure that the state remains secure and safe for socio-economic developments.

The Federal Capital Territory Administration (FCTA), and National Agency for the Prohibition of Trafficking in Person (NAPTIP) have signed a Memorandum of Understanding for the management of FCT Women Rehabilitation Centre located at Sabo-Lugbe in Abuja Municipal Area Council of the territory.

A presss statement signed by SA, Media Austine Elemue said the FCT Minister of State, Dr. Ramatu Tijjani Aliyu, who presided over the signing of the MoU called on both parties to respect the terms and conditions spelt out in the document, just as she revealed that the centre would be managed by NAPTIP for a period of two years.

The Minister commended the Director General of NAPTIP, Dame Julie Okah-Donli, for her doggedness in the battle against trafficking in person, also called for collaboration and synergy between relevant agencies in the fight against human trafficking in Nigeria.

“I want to appreciate our sister, the Director General of NAPTIP, who is always there for the plight of the vulnerable women and youths, and anything against their fundamental human rights. She goes out of her comfort zone to ensure that none is maligned in the society. And today’s event has demonstrated her zeal to go out of her ways to look for more decent accommodation for our vulnerable women.

“These are all the giant strides of a leader and we appreciate you and your team. Hopefully and sincerely, under this period of two years, all that is written here is legally binding on both parties. And as the custodial of state charged with the responsibility to oversee the signing of this document, I sincerely hope that today will mark the beginning of many beautiful things to come”, the minister affirmed.

She, however, assured the FCT Administration that the collaboration between the two parties would yield positive results, stressing that the centre would be a beckon of women rehabilitation and empowerment.

According to her; “You have been very supportive to our agency. I want to assure you of this existing synergy and collaboration between my agency and FCTA, is going to be bigger and better and we are not going to take it for granted.

Thank you so much because it is going to be a joint collaboration between FCTA and NAPTIP. I can assure you that we are going to make good use of the facility”.

The Shuaibu Abubakar Audu’s Foundation (SAAF), has condoled with the immediate family and Igala kingdom over the death of the Attah Igala, HRM. Dr. Michael Ameh Oboni II.

The foundation delegation ably led by its Chairman, Hon. Prince Idoko Daniel Ogacheko and was received by the Chief Mourner the Son of late Attah, Prince Ocholi Ameh Oboni

Prince Ogacheko, who convened the message of Grand Patron of the foundation Alhaji Shuaibu Abubakar Audu, condoled the deceased’s family, as having described late Attah as a peaceful, cordial and amiable father to all.

Prince Ogacheko prayed to God to give his family, friends, associates the fortitude to bear the irreparable loss.

READ:  Immediate Past Minister Of Youth And Sport, Solomon Dalung hospitalized, Pleading With Nigerians To Pray For Him

“Unfortunately, death is not a letter that is bodily written on human face and nobody knows who is next”.

But God, who is sovereign does whatsoever He pleases as He is the ultimate decider of human life,” the foundation said.

Speaking on behalf of the family, Prince Ocholi Ameh Oboni expressed gratitude to Audu’s Foundation for coming down to identified with them. He pray to God to grant them journey mercy to their destination.

Chairman Nasarawa state House of Assembly committee on Urban development and member representing Awe south constituency Hon Suleiman Yakubu Azara, has called for government urgent intervention to reconstruct the Azara bridge which was washed away by flood as a result of heavy down pour.

The lawmaker who was accompanied by the contractor Rim construction company sympathized with the people of Azara development Area over the unfortunate incident and expressed concern on how the bridge linking Azara community with other parts of the world was completely washed away making life more difficult to commuters and residents of the area.

“I’m shocked at the level of damaged cause by this flood which resulted to the collapsed of this bridge linking Azara and other communities as my people cannot longer go outside and come back to the town.

“this is the only road that linked Azara to other communities and apart from been endowed with mineral and agricultural potentials it also border Taraba, plateau and Benue states.

“this is a serious ploblem therefore I’m calling on the state government to urgently come to our rescue and thank God we have a listening and hard working Governor Engineer Abdullahi Sule whom am very confident he will do something urgently, Hon Suleiman added.

Speaking to newsmen at the scene, one of the commuters Lawan Yakubu makori attributed the incident to carelessness on the part of users who doesn’t care about existing of the affected bridge even when it started developing faults.

According to him the Azara bridge was gradually been washing away for about four months now whenever it rains but action has not been taking until it finally collapsed as a result of a recent heavy down pour cutting off the area completely.

He appreciated the lawmaker Suleiman Yakubu Azara for the visit saying it has rekindle their hope.