Senate President of the National Association of University Students (NAUS) Comr. Ibrahim Muhammed Lawal Dubagari has joined Nigeria students home and abroad to celebrate with Barr Labaran Magaji (Matawale Toto) on his special birthday anniversary, describing him as a untiring leader who have over the years mentor many youth who wish to be mentor as progressives.

A statement he personally signed and made available to the press on Wednesday said “You studied a tough career, but you came out victorious even in each case you had, you are an example of admiration, and today is your day you deserve a nice accolades for all the work you have done to keep the unity of Nigeria and your immediate community.

“Let’s give some cheers to this great lawyer, leader and community leader ‘ Matawale Toto, all the awards you have are symbolic gifts for being a great professional, humanitarian, generous, kind, skillful, innovative, hardworking, patience and philapropist of the highest refute”.

“Today, you celebrate your birthday as a professional lawyer whom have excced all legal expectations in court of law and for community services in Nigeria.

Oh! Lord fill him (Matawale Toto) with your blessings on his way, today and always. I know you are an amazing person and a professional in full swing”.

We hope you enjoy these messages of your birthday, which I know is a dedications to those special lawyers in your team”.

On behalf of the union, Student’s of University Keffi, family, political associates, global Ally in activism we wish you happy birthday and many more blessings ahead”. 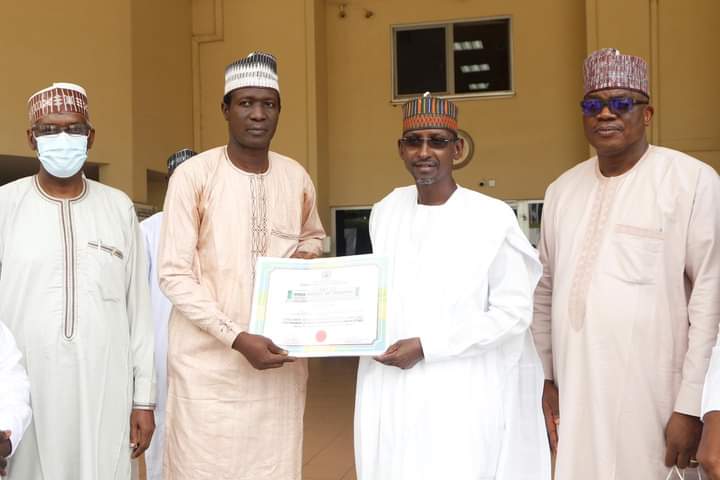 The minister of the Federal Capital Territory (FCT) Muhammad Musa Bello, has expressed great pride on the achievement of the principal of Government Secondary School (GSS) Kubwa, Abuja, on being adjudged the best national School Administrator at the recent World Teachers’ Day celebration.

School Proprietress present certificate to FCT Minister, Muhammad Musa Bello, as they 3rd best winner of Private schools in Nigeria during the celebration of the world Teachers Day

Bello, said this when he received the Principal, Mr Musa Nuhu Zuru and the proprietress, Blooming Heritage Schools Mrs Adedunke, Modupe Abiri, whose school also emerged as the 3rd best private primary school in the country in his office on Friday, in Abuja.

He said the emergence of the two schools was a reflection of the high quality of education in FCT schools, saying “I’m extremely proud of your achievements, including the achievement of our numerous students in both public and private schools, who have been able to get awards and to come up tops in competitions. All these are a reflection of the educational system of the FCT,” he said

The minister, while commenting over overstretched of facilities in some FCT schools, which he said was as a result of the influx of people into the city including neighboring states.

He said many parents have desired to enroll their children across secondary schools in the territory, even as he pledged that his administration will continue to do its best to uphold the standards already established in FCT schools.

He also emphasized on the need for all stakeholders to work together for the betterment of education sector in the territory.

“As we all need to work together and make sure that the quality of education is maintained, while we at the policy making level will try our very best to ensure that funding and all the needed support is granted within what is feasible and what is possible” the minister said.

Bello, also commended the permanent Secretary, the Secondary Education Board and the Department of Quality Assurance, which he said supervises the activities of private schools in the FCT for their good showing on the national stage.

He noted that it was as a result of the emphasis the FCT administration has placed on the development of education in accordance with the agenda of the administration of President Muhammadu Buhari.

The minister directed for construction of a multi purpose hall in the school for the students of the school in order for them to write their 2022 terminal examinations.

In his remarks, Mr Musa Nuhu Zuru, Principal, GSS Kubwa thanked the FCT minister for providing the enabling environment that allowed FCT schools to excel adding that all required school facilities were provided by the FCT administration.

Also, the Proprietress of Blooming Heritage Schools, Mrs Adedunke Modupe Abiri, commended the efforts of the education secretariat, especially the Department of Quality Assurance for their roles in ensuring the success of her school.

The FCTA Permanent Secretary, Mr Olusade Adesola as well as the Acting Secretary for Education, Alhaji Abdulrazak Leramoh, and the Chairman FCT Secondary Education Board, Dr Musa Yahaya, both pledged to work harder to maintain the high standards of FCT schools.

They said that the achievements of the awardees will encourage other principals and teachers to put in their best.

Minister of the FCT, Muhammad Musa Bello (m) receives certificate from the principal of GSS Kubwa, who emerged as the overall winner as the best School Administrator during the celebration of world Teachers Day.

Global Times Nigeria correspondent report that among the dignitaries present at the event, were the Chief of staff to the FCT Minister, Malam Bashir Mai-Bornu, the Director Secondary Education Board (SEB) Mrs Nanre Emeje and other senior staff of the FCTA.

PAAYEF Commended Over The Organized Quiz/Essay Competition for Secondary Schools in Kogi State.

Chief of Staff to the Governor of Kogi State, Pharm. Abdulkareem Asuku

Hon. Ochada who expressed gratitude to the Pham. Abdulkareem Asuku over his commitment to the education and empowerment of children, youths and women in Kogi state, said the efforts will definitely uplift both the students and parents.

He explained that the NGO has organised quiz and essay competitions for Secondary schools in Kogi State.

According to him the theme of the competition which is “Reviving the Glory of Education” is geared towards reviving the essence of education and students mentorship in Kogi state.

The competition, which is spread across the three senatorial zones, will have its final selection of the best in the state capital, Lokoja.

There will be awards, scholarships and gifts for best students, schools and competitors.

Pharm. Abdulkareem Asuku Youths Empowerment Founds (PAAYEF) a Non-Governmental Organization dedicated to the education and empowerment of Kogi State Children, Youths and women is geared towards improving and impacting on the lives of the teenagers.

Hon Ochada stated further that the Educational arm of PAAYEF, is specifically geared towards facilitating access to high-quality education opportunities for students across Kogi State, payment of tuition fees, WAEC fees for the less privileged and grants for various professional development.

Chief of Staff to the Governor of Kogi State, Pharm. Abdulkareem Asuku

The SSA who noted that with the foundation’s aims at providing students with the support and tools needed to succeed in academic pursuits, will provide ample opportunities for them to prove themselves and the society at large, that they can excel irrespective of gender, religion, and economic status.

Students have been advised to seek for counsels from experts before choosing a career.

President, 2007 set of the Federal Government College Kano, Lieutanant Adamu Babangida Saleh, gave the advise in a message to a Career Talk organized by the 07 Class in the State.

Lieutenant Babangida, who was represented by the Chairman of Guidance and Couselling Committee, Ustaz Sadiq Ahmad, explained that choosing a career was an important decision for students to make as it affects them all through life time.

He called on the students to consider their Interest, capability, finance, availability of opportunities before choosing a career, urging them to desist from missing classes, smoking, destroying school properties and other negative behaviours.

Lieutenant Adamu Babangida commended the management of FGCKN for the opportunity given them to give back to the school and promised that more awaits the college.

The Career Talk explained in details the requirements for Medicine, Engineering, Law, Journalism, Agricultural Science and Accountancy Courses to the Students.

Recitation of the National and school anthem, display of camp activities by members of the National Youth Service Corps (NYSC), debate amongst the resource persons and interactive session with the students, were other activities that took place at the event.