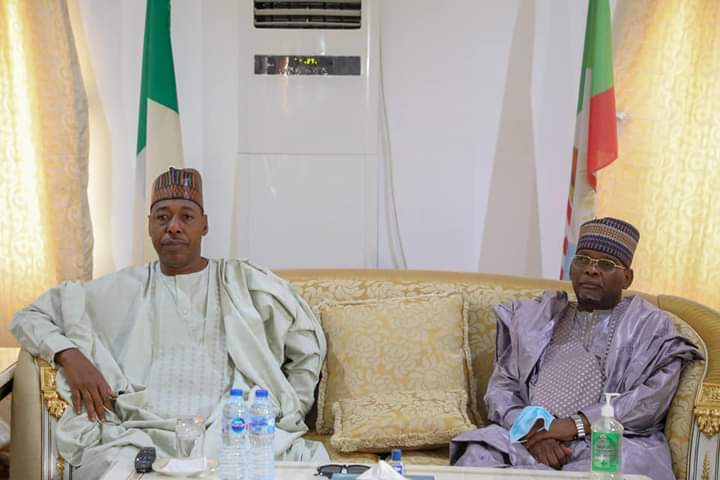 The President of the Republic of Niger, Muhammadu Yusufu on Sunday send a high powered delegation to commiserate with the Borno State Governor, Prof. Babagana Umara Zulum over an attack on his convoy near Baga last month.

The delegation was led by the Nigerien Minister Of Education, Hon. Dauda Mommodu Marte.

In a message delivered by the Nigerien Minister Of Education, Hon. Marte, President Muhammadu Yusufu commended the Governor of Borno, Prof. Babagana Umara Zulum for his tireless efforts in the reconstruction, rehabilitation and resettlement drive.

“Your Excellency, our visit today is at the instance of our President to come and commiserate with you over the unfortunate attack on your convey in last month. The President have seen all that has happened in a video clip, he noted that your demonstration of courage in the service to the people is very commendable”

“Many of your people and ours are taking refuge in different places both in the republic of Niger and Nigeria, we have been following your resettlement drive keenly.”

“We are all affected by this problem, our people that were displaced by this crisis could not yet return back, we believe that ressetling people back to their communities is the only solution. No Government can sustain the feeding of these large number of people continuously. People should be allowed to go back to their farmlands, people should have to get back their sources of livlilhood.” President of Niger said.

READ:  Sen. Adamu @ 74: Speaker Balarabe Says The Former Governor Laid A Foundation For The Growth Of The State.

Meanwhile, President Muhammadu Yusufu also extends’ his condolence to the authorities in Nigeria over the death of the Commander 25 brigade, Damboa, Col. Dahiru Bako.

Making his remark, Governor Babagana Umara Zulum extends his appreciation to President Muhammadu Yusuf for commiserating with him, noting that it is an indication of a very strong relationship between the two countries.

READ:  Water Scarcity In Lokoja Was As A Result Of Ravage Flooding Which Affected Some Operational Machines -- Hon. Danga Appeals To Residents

Zulum informed his visitors that he will relate the goodwill extended to him to the President and Commander In Chief, Muhammadu Buhari.