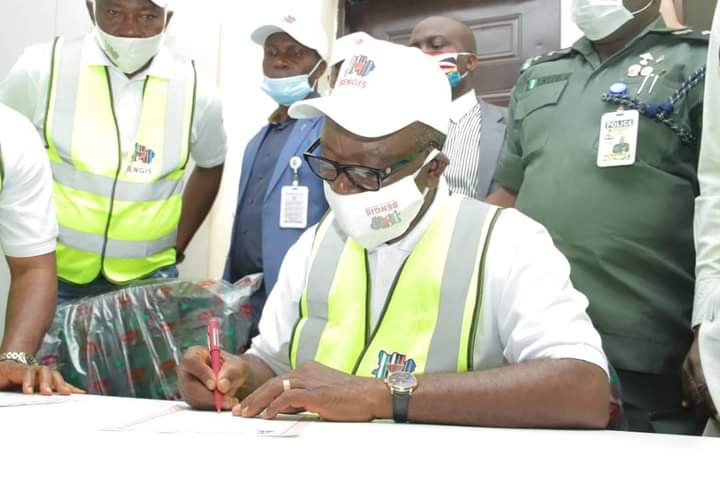 The Governor declared on the occasion:

“This project marks a milestone in the history of my administration and could not have come at a better time. This is because it will address the numerous challenges associated with land administration in the state as well as support improved urban planning, infrastructure development, environmental management and encourage private investment.”

BENGIS is set to ease the acquisition, registration and documentation of land in the state, as well as issuance of title documents. The project is being supervised by the State Ministry of Lands, Survey and Solid Minerals.

The Benue Government in February this year(2020) awarded contract for the creation of a modern Geographic Information Service to GIS Transport Ltd. The contract followed the approval Governor Ortom had earlier given to the Ministry of Lands, Survey and Solid Minerals.

COVERAGE
BENGIS will operate throughout Benue with a service centre in Makurdi, the state capital and additional service points in Gboko, Otukpo, and Adikpo. Each of the four centres will have a modern office infrastructure built to professional standards with 24/7 power supply and ICT platform with internet access.

SIGNIFICANCE
Governments at all levels now depend on geospatial data to facilitate the achievement of Sustainable Development Goals, SDGs. It is therefore to enhance good governance in this modern era that the Ortom administration finds BENGIS as a key platform for improved decision making and policy formulation.

BENGIS will equally provide the needed geospatial information to support Ministries, Departments and Agencies, (MDAs) of Government, organizations and professional bodies to optimize their performance in the areas of revenue drive and access to timely and precise information which will not only assist in policy formulation but also help in effecting changes to existing policies in the face of emerging realities.
Effective implementation of BENGIS will surely address/curtail land disputes.

The project is for two years and was awarded based on the Turkey Solution. This means that the contractor, GIS Transport Ltd will design, build, operate and transfer management of the project to Benue State Government.

As Commissioner Unenge pointed out, ‘land is a valuable resource in terms of its economic values for agriculture, residential uses, forestry, industrialization, mining and a medium for provision of infrastructure as well as its asset value as an important component of business capital’.

BENEFITS OF BENGIS
(In Summary)

* Digital aerial mapping of Benue State
* Identification of solid mineral resources
* Systematic and efficient land re-certification, regularization and registration of titles/interest in land
* Enhanced planning and development control
* Elimination of land speculation
* Boost investment in real estate sector through transparent processing of land titles
* Warehousing of land documents in soft and hard copies
* Enhanced revenue for the state through computerized system of identification and collection of revenue and dues such as ground rent
* Computer based decentralization of land management through establishing BENGIS centres in Benue’s three senatorial districts
* Identifying and classifying land based on their suitability for particular crop cultivation, agricultural activities, mining, forestry, residential and other uses
* State-of-the-art complex with digital tools
* Reduced cases of land disputes/legal tussles for land ownership amongst others.