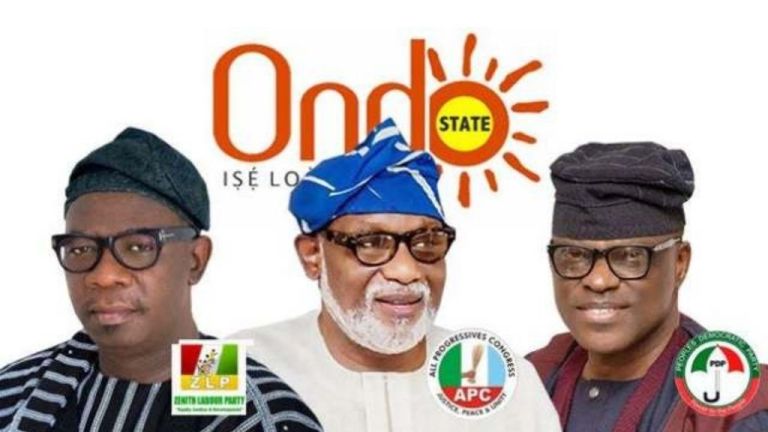 Governor Rotimi Akeredolu, the candidate of All Progressives Congress, APC, has won in 15 of the 18 local government areas of Ondo State with the of declaration of results from all the council areas at the Independent National Electoral Commission, INEC office in Akure on Sunday afternoon.

In one of the last two local governments declared, APC won in Ilaje with 26,657 votes to 11,128 votes scored by the Peoples Democratic Party, PDP.

Meanwhile the returning officer of INEC has declared the All Progressive Congress who scored a total votes of 292,830 as the winner of the Election and returned elected as the duly elected Governor of Ondo State for another 4yrs, while his closest rival Peoples Democratic Party, scored 195, 791 votes while Zenith Labour Party scored 69, 127 votes

“I Am Not In Govt For Fame Or Money, But To Serve – Obaseki

Edo State Governor, Mr. Godwin Obaseki, has said politicians must begin to prioritise the vehicle of governance to benefit the people, adding that political leaders must remain selfless for Nigeria to attain its full potential.

Speaking to journalists in Benin City, Obaseki said he is not in government to be famous or make money at the expense of ensuring development that will benefit the people.

“For things to be working in Nigeria there are structural challenges that we must fix. Let us not gloss over the cracks. Let us go to the foundation and begin to fix the conditions because the cracks are expanding so wide.”

Obaseki continued: “In a democracy, you need an institution that will ensure law and order and that is why we have the security agencies.

“Our security arrangement in the country must reflect our federal system as I can’t be a governor of a state and not able to hire and fire my Commissioner of Police, but #ENDSARS protests have helped us start the process.”

……Urges Them To Emulates The Good Morals, Teachings, Tolerance Of Prophet Muhammad.

The Kogi State Commissioner for Water Resources, Hon. Abdulmumini Danga, has urged Muslims across the globe to emulate the good morals, and teachings, tolerance of Prophet Muhammad (S.A.W).

In a statement, the Commissioner urged Muslim faithful to continue to show love and sacrifice as espouse in Islam as they celebrate the birth of Prophet Mohammed (S.A.W).

The water Commissioner urged them to commit themselves to the teachings of the prophet not just as a matter of religious obligation but a means to promote peaceful living in a multicultural society.

READ:  STATEMENT FROM HIS EXCELLENCY, RT. HON. EMEKA IHEDIOHA, CON, ON THE SUPREME COURT RULING ON IMO STATE GOVERNORSHIP ELECTION OF THE MARCH 9, 2019.

According to him, “I felicitate with our Muslim brothers and sisters in Kogi State and across Nigeria on this day set aside to celebrate the birthday of the Holy Prophet Muhammad (S.A.W).”

He encouraged Muslims to continue to eschew acts and behaviours that undermine the unity and progress of the society, just as the Prophet Muhammad (S.A.W) would, urging them to be good neighbours and enviable ambassadors of change.

He however, calls on the populace of Kogi State to continue rendering their supports and prayers to the Governor Yahaya Bello’s led administration in the State in order to get more dividends.