A former National Chairman of the All Progressives Congress, Adams Oshiomole, on Tuesday, sought for an out-of-court settlement in the N10bn libel suit instituted against him by Benue State Governor, Samuel Ortom.

Ortom had filed the suit against the former APC chairman over his comments against him at a press conference on July 27, 2018, where Oshiomhole accused the governor of having a hand in the death of two Catholic priests and other parishioners at Mbalom Community, Gwer East Local Government Area on the grounds that one of the priests had preached a “very critical sermon” against him (the governor).

Earlier on the suit, Oshiomhole had filed six preliminary objections which the court resolved all in Ortom ’s favour.

However, at the resumption of the case on Tuesday , counsel for Ortom, Samuel Irabor, submitted that he was ready to call his witnesses, but said that Oshiomhole’s counsel, Festus Jumbo had informed him that they have considered putting up a retraction of the publication and it would be ready within Oshiomole

He said he was applying for another date to take a look at the terms of settlement canvassed by Oshiomhole.

The Presiding judge, Justice Augustine Ityonyiman of State High Court sitting in Makurdi, after listening to both parties, adjourned the case to October 29, for a report on the out -of – court settlement . 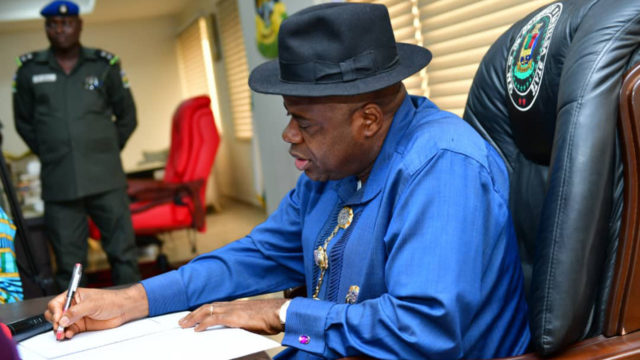 A five-man panel of the Appellate Court has overturned a ruling which had nullified the election of Douye Diri as governor of Bayelsa State.

Channels Television reports that the court held that the Bayelsa Election Petition Tribunal acted outside its jurisdiction by nullifying the election of Governor Diri.

In a unanimous judgment, the five-man panel of the court said the Advanced Nigeria Democratic Party failed woefully to show that it had a valid candidate that was unlawfully excluded by the Independent National Electoral Commission (INEC).

The court berated the tribunal for ignoring the fact that the petition of ANDP was status barred in addition to the fact that the party presented an unqualified candidate to INEC in the November 16, 2019 Governorship election in Bayelsa State.

Barr. Tanko Congratulates Gov Bello On Victory At Supreme Court, Says The Apex Court Judgement As An Affirmation Of The People’s will As Expressed In November 16 Poll.

Barr. Tanko who is also the Senior Special Assistant on Local Government and Chieftaincy Affairs to Governor Bello, described the apex court Judgement as an affirmation of the people’s will as expressed through their votes in the November 16, governorship election in the state.

In a statement signed by his Media Aide, Yahaya Idris and made available to newsmen said, “It is a great day for democracy and the people of Kogi State.

“The highest court in the country has finally settled the controversies surrounding the Kogi governorship election and affirmed Governor Yahaya Bello as the true winner of the election.

“I want to congratulate Governor Yahaya Bello and his Deputy Chief David Edward Onoja on their victory at the Supreme Court. This victory is for the good people of Kogi state, they are the real winners in the context. We have no doubt in Gov. Bello’s ability to take Kogi State to the next level of development and prosperity”.

He however, pray for long life, sound health and strength of the Governor to enable him go on with the laudable programs he has started.

Reacting to the judgment, the SSA in a statement signed by his Media Aide, Yahaya Idris, said the Appeal Court verdict was a victory for democracy and the good people of the Kogi West, which according to him, the APC gave their overwhelm support in view of what the Alhaji Yahaya Bello led administration was doing since its assumption of office.

Barr. Tanko who is the immediate past Administrator of Koton-Karfe, Kogi Local Government Area, while thanking God for the victory, appreciated the judiciary for rising up to its solemn responsibility of ensuring that justice prevails, stressing that the judgment was a clear indication that the third arm of government is the last hope of the common man. Describing it as a true reflection of the wishes of the people of the Kogi West, especially those at the grassroots.

“He therefore, wishes to call on Sen. Dino Melaye and opposition to drop their difference in the interest of the zone and join hands with our visionary Senator to move western zone forward.

READ:  Barr. Tanko Congratulates Gov Bello On Victory At Supreme Court, Says The Apex Court Judgement As An Affirmation Of The People’s will As Expressed In November 16 Poll.

The Court of Appeal in Abuja, had on Tuesday, dismissed the appeal by the former Senator and aspirant of the Peoples Democratic Party (PDP) in the November 16, 2019 Senatorial election, Senator Dino Melaye, seeking to upturn the emergence of Senator Smart Adeyemi