Minister of Information and Communication, Alhaji Lai Mohammed on Saturday said the ongoing #EndSARS protests by youths across the country is unnecessary as the Federal Government has met the demands and has even done more than what was asked.

Muhammed also said the Federal government can’t go higher than what it has done in meeting the demands of the protesting youths.

While speaking on the attack on Osun state governor, Gboyega Oyetola by hoodlums, he  said  latest developments in the country  has shown that the ongoing #EndSARS protests has been completely hijacked by ‘dark forces’.

He said President Muhammadu Buhari will not abdicate his responsibilities, number one of which is the protection of lives and property.

He said “If the purpose of this protest is to meet your demands and that demands has been met and made public, and government has been giving marching orders, for crying out loud, if you are sincere from the word go, why don’t you give the government a chance?  We can’t go higher than what we have done”.

“The meeting of NEC comprise all governors of the country, presided over by the Vice-President. A communique was read out and we have started the implementation.  We’ve asked all state governors to set up Victims Support Fund; all state governors, not only are you going to have a judicial panel of enquiry, but the composition must comprise of youths, students and CSOs”.

“We went further to say that they should set up a  Special Security and Human Rights committee In each states with students, youths and CSOs as members. And we are saying that the new Police Special Tactical unit will overseen by this panel which comprises of CSOs and youths. I don’t  think we can bend beyond that”.

It was tragedy as four youth were reported dead as the youths in Kogi state in the process of looting the Covid-19 palliatives hoarded by the authorities of Kogi state.

They however looted the items as they broke in to the colonial UAC warehouses on Sunday in Lokoja, the state capital.

The youths in their thousands, who besieged the warehouses along Pata road in Lokoja metropolis, were initially prevented by the security men, but after being overwhelmed by the youths opened the gates and looting commenced.

Women were not left out in the scramble for the essential commodities which was sent by the Ministry of Humanitarian Affairs and Social development, CACOVID, Dangote group and other philanthropists, meant to cushion effect of the lockdown resulting from the Covid-19 pandemic.

With the ongoing EndSARS protest nationwide, youth across the country uncovered the heartless hoarding of the food items, while generality of the populace have been battling with hunger.

The state capital was agog with the less privileged seen rushing to the scene of the looting and proudly displaying their loot, claiming that the items belonged to them in the first place.

The state government officials were watching helplessly as the poor carted away the hoarded food items. However the Commissioner of information, Hon. Kingsley Fanwo hailed the youths for their courage and determination to free the society from tyrant and brutality.

READ:  Just In: Buhari Calls On Protesters  Nationwide To Stop All Forms Of Protest,  Urges Them To Embrace Dialogue (Full Speech).

Though the stampede and subsequent looting was to the delight of many who see the hoarding as sheer wickedness, however the scramble was said to be attended with tragedy as 4 youths died, due to suffocation and stampede among the rampaging looters.

Following the tireless effort made by incumbent Governor particularly towards ensuring sustainable peace and showing capacity in all ramifications, Benue Youth Forum (BYF) has commended Governor Samuel Ortom for showing true leadership, particularly his proactive handling of the EndSARS crisis ravaging parts of the country in the last few weeks.

It would be recall that volcanic protests erupted in the country following the grievances of the youths against police brutality, bad governance and other abuses.

As result of that many states were overwhelmed by the crisis with their Governors practically going into hiding or declaring 24-hour curfews with economic activities coming to a halt in those states.

While Some of the Governors refused to address the youths even as the protesters accused them of either diverting or hoarding the COVID-19 Palliatives sent to their states. The situation, added to the prevailing anger of the youths over police brutality soon aggravated with the EndSars protesters forcing open warehouses in many states and allowing the people to cart away the food items.

In a statement signed and issue by Terrence Kuanum, President
Benue Youth Forum said Benue under the leadership of Gov Samuel Ortom stood firmly with the youths of Benue telling the rest of the country that what the protesters were saying was justified and the country should listen to the youths. He personally met and addressed the EndSars protesters at Benue Peoples House gate and commended them for conducting themselves peacefully and orderly during the protest.

All these took place because of the open door policy the Governor has established with his people by personally getting involved to provide solutions to their challenges.

It is on record that soon after the Dangote group with other private bodies under the aegis of CACOVID donated palliatives to Benue State, Governor Ortom in his proactive manner kept calling on the monitoring team of the CACOVID group to come and supervise the distribution of the palliatives in Benue State. Eventually, the group cape and the palliatives were transparently distributed to the 23 local government areas of the state in the full glare of Benue SEMA, Local Government Chairmen, Security Agencies, Civil Society, CAN, JNI, Traditional rulers, Community Leaders and CACOVID Monitoring and Evaluation Team.

After the palliatives were distributed, complaints got to the Governor that there was diversion of the items in Oju local government area and immediately, Governor Ortom set up a Committee headed by Secretary to the State Government, Professor Anthony Ijohor, SAN, to investigate the allegation of palliatives diversion in Oju. He has vowed to sanction whoever is found culpable in the matter.

This is why Benue is peaceful today despite the fact that other states are witnessing violent protests with the youths breaking warehouses to find hoarded palliatives. Credit goes to Governor Ortom’s vision, sincerity and transparency in ensuring that the palliatives were all distributed to the poorest of the poor in Benue State.

When the protests turned violent and the entire country went in flames followed by burning of public and private properties and looting of palliatives stored by various State Governments, all eyes in Benue were on Governor Ortom to prove his prudence and accountability in public service, and to the surprise of many, all the warehouses that are used by the Stare Emergency Agemcy (SEMA ) were thrown open to the Benue public and Media. The people confirmed that truly, all palliatives reached the poorest of the poor in State.

“We commend Governor Samuel Ortom for once again making Benue proud and showing us all that truly, our welfare is a top priority to him. We call on Benue people to stand by the Governor in ensuring that the state remains peaceful. We encourage our members (Benue Youths to be vigilant so as to prevent any hoodlum from infiltrating our ranks to push us to avoidable violence.”

“While we sympathize with other states which are counting their losses as a result of the ongoing crisis, we must appreciate our people for showing maturity in the face of temptations. This firm resolve for peace has been expressed across party lines and the winner is Benue State.”

May God continue to to bless our dear state.

#EndSARS: Tinubu Insist On Knowing Who Order The Lekki Killing, Commiserates With Lagosians. 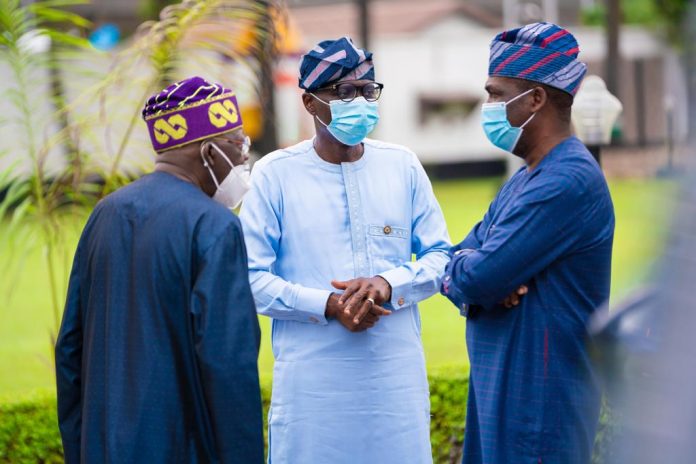 Speaking to journalists shortly after paying a condolence visit to Governor Babajide at the State House, Marina, Asiwaju Tinubu, who was accompanied by his son.

Tinubu, the first governor of Lagos State in the Fourth Republic, also debunked the report in some media, especially the social media, that he fled Nigeria for safety after the Tuesday’s shootings at Lekki Toll Gate.

Asiwaju expressed his displeasure on the invasion, destruction and wanton of looting of public and private assets in the state after hoodlums and other criminal elements hijacked the #EndSARS protest.

He denied any involvement in the Tuesday shooting of #EndSARS protesters by some Nigerian Army in Lagos on Tuesday.

The APC National Leader says he’s ready for inquiries on the incident, stated that the purpose of his meeting with Sanwo-Olu was to ask him if he had ordered soldiers to attack #EndSARS protesters at the Lekki toll gate on Tuesday.

“if he didn’t order the attack, who ordered the attack? That’s all I needed from him” the former Lagos State Governor said.

“For those who suffered casualty from SARS, the Commission of Inquiry that is already set up will unearth that and will make their recommendations”.

“I trust the calibre and the character of the people there, they are independent. That is one” he asserted.

Lagos Panorama reported that some business concerns linked to him, which include Television Continental (TVC) and The Nation were attacked by hoodlums in Lagos on Wednesday.

Mr Tinubu noted that “Those who suffered casualty during the gunshots need to answer some questions too”.

“Even though we want to help, we still must extract information that will help the government to prepare in future and understand how and when to react because the governor, in particular, is a youth”.

“As a youth himself, he quickly went to Abuja with the 5/5. The government immediately put into action, dissolved the SARS and had to work through other recommended actions, the needs they demanded. Within a few days, he reported back to the public. That is responsive enough”.

“But where are we getting the looting, the carnage, the burning, the invasion of police stations, stealing of arms, maiming of the innocent? It is a handshake beyond the elbow.”

He stated that he did not travel out of the country as reported by some sections of the media, that he had traveled to England and France in the past few days, the APC Leader said, “I didn’t go nowhere; I’m a Lagosian and I still hold the title of Asiwaju of Lagos and I am still the Jagaban.

“Fake news is all over the place. They said Seyi my son was kidnapped and was chased but look at him. I didn’t pay a penny to bring him here.”