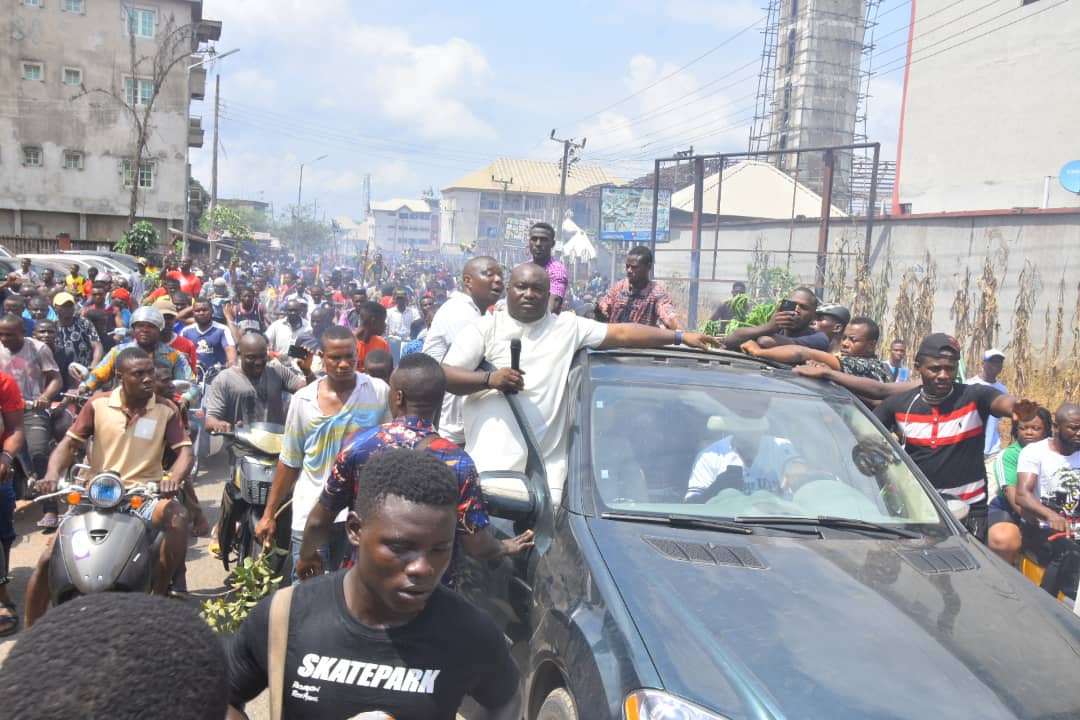 In what started as a tension soaked morning with the news that the Central police Station CPS Nnewi was on fire and both the Road Safety Office and Area Command under attack. There was palpable trepidation accompanied by that feeling of gloom that indeed it was going to be a dark day in the history of the ancient commercial town of Nnewi.

The Senator on getting reports of these incidents including disturbing reports that a motley crowd of angry youths has gathered in front of the Area Command immediately swung into action.

He beckoned on his aide to start his car (the aide’s car ) and jumped into the passenger side and then turned and gave a standing instruction that no security man whether police or DSS should follow him. Everyone looked on in shock as the car made its way into the heart of a boiling Nnewi town. It took a few moments for the reality of what Senator did to sink in before his other aides and visitors who were with him that morning started mobilising vehicles to follow in pursuit .

To some of us, that move was pure suicide mission

On arrival at the CPS, a huge crowd had gathered and right in their midst laid a young man evidently shot and going by the motionless way he laid on the ground may be presumed dead. On sighting the Senator, the angry youths all started expressing their grievances in a cacophony of voices but one message stood out clear ,…..shots fired by policemen hit the boy on the ground .

The Senator immediately galvanised into action and mobilised the youths to carry the body into a vehicle from where they all moved in one accord to the hospital. Immediately the young man was pronounced dead, the Senator knew he had a big task ahead of him.

READ:  #EndSARS: Inside Details Of Meeting Buhari Had With Former Nigerian Heads Of State.

The Senator went into overdrive, pacifying, hugging the ones weeping, and cajoling the youths to think through their grievances and realise the futility in burning public institutions since it is still govt money that would have been used for their welfare that will be used to replace them. He made them realise that burning those places will even provide an opportunity for corrupt politicians to take advantage of and siphon funds in the guise of carrying out contracts for the repairs and replacement.

After some minutes of sustained pleading by the Senator who was by now evidently capitalising on the love that he commands amongst the youths, the mood in the crowd moved from the urge to destroy things to that of assisting the Senator in calming other restive youths in the other parts of the town down and that was how the procession commenced.

The youths marched on foot across the length and breadth of Nnewi town with the Senator himself in their midst alternating in between walking and standing on the passenger side of his aide’s vehicle .

That was the story of how he gathered the angry youths spoiling for a showdown in a town where the entire security apparatus had gone into hiding and where bonfires had already been set up at different points with some miscreants already making the moves to embark on looting and burning of shops. In some cases the Senator now accompanied by the youths of the town arrived at the nick of time and staved off ongoing arsons by calming the youths met on the scene and putting out already burning fires.

That was how he moved round Nnewi twice, gathered the restive youths and took them to Nnewi high school where he addressed them and sent them home now pacified.

This lasted from around 9 am in the morning till almost 2 pm in the afternoon before calm returned to the Commercial town.

He then retired back home after making a detour to Authority FM to address the youths in the state on the need for calm (the radio station is received almost all over the state).

At about 3 p.m , another distress call came from Ichi and once again he galvanised into action and headed to Ichi where he arrived the town to an atmosphere of chaos as the youths had already converged at the police station and set parts of it on fire. The policemen trapped inside the building were firing warning shots that seems to provoke the crowd more. , the same circle commenced once again as he immediately alighted from the car and walked through the crowd pacifying the angry youths, then raised his hands and walked into the Station defying the hail of bullets coming from within. On gaining entrance into the station , he quickly galvanised the policemen into securing and locking up their armoury and then walked out to the angry mob and immediately brought the situation under control , then got the youths to put out the fire which had by now engulfed many parts of the station

READ:  Inside Tomato Book Launch: Nasarawa Youth Commend The Foresightedness Of Comr. Idris Ojoko, Says He Has Brought Honour To The State And Beyond

He moved into Oraifite where the youths had also gathered and were hell bent on setting fire to the police station. He gathered the youths and took them to the civic centre where he addressed them, assuaged their feelings and brought the situation under control

He moved from there to Ozubulu and Ihiala to ensure there was no spiral effect in those towns He also made calls to his people in Orumba, Nanka, Aguata and the rest of the towns under his Senatorial district and was reassured that the towns were relatively calm before he finally retired back to the house to a heavy sigh of relief from his aides.

Senator Ifeayi UBA in the midst of protesters appealing to them to give peace a chance.

On sighting our relief that he wasn’t attacked at any of the scenes visited or even shot , he laughed it off and told us that he is not a politician but a humanitarian and cannot be a proponent of #GosimKamfunanya and hide inside the house when his people are under attacks

He went upstairs to take his morning bath at 7 p.m

We, the aides and #UbahNation adherents all learnt lessons yesterday.