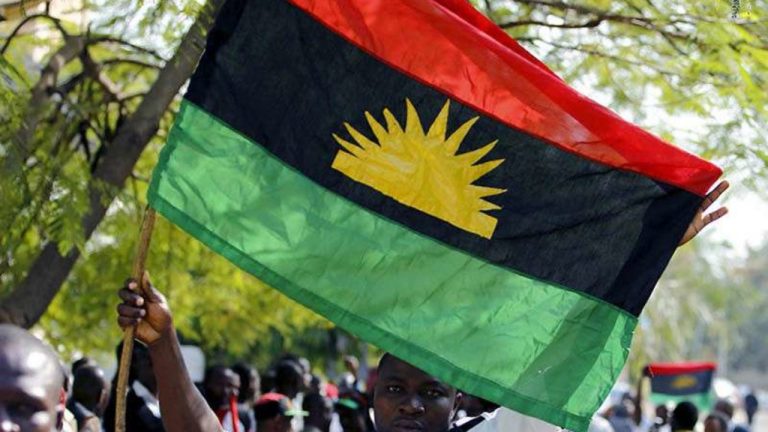 The proscribed Indigenous People Of Biafra (IPOB) has says its members across the country will resume peaceful protests from Monday, October 26, 2020, to ensure that all demands made by the leaders of the #EndSARS movement were met in quick time.

A statement signed and issue by IPOB’s spokesman, Emma Powerful, on Sunday said that all necessary measures are being put in place to ensure that the lives of the protesters are protected.

He, however, said that the peaceful protest would be confined to designated locations and “there will be no procession or street march because marching on the streets will give room to mischief makers to breach public peace.”

He said the IPOB members would embark on cleaning up towns in Benin, Enugu, Aba, Abakaliki, Umuahia, Nnewi, Uyo, Calabar, Onitsha and Igweocha to clear the debris caused by last week’s violence.

He said: “Following the killings, destruction and burning of private properties occasioned by the brutal state-sanctioned, the murder of peaceful protesters at Lekki Toll Gate, brave youths across Biafraland would come out to commence the process of cleaning up and securing their towns and cities from hoodlums and criminal elements.

“This will afford young people in places like Benin, Enugu, Aba, Abakaliki, Umuahia, Nnewi, Uyo, Calabar, Onitsha and Igweocha the long-awaited opportunity to tidy up and clear the numerous mountains of rubbish in these cities which have become not only an eyesore but also a health hazard.

“Measures are also being put in place to protect the lives and property of innocent citizens from being attacked by rented hoodlums and political thugs. However, where necessary, assets acquired with looted public funds by corrupt politicians will remain a legitimate target.

“It is important to note that anybody found attacking or engaging in arson or wanton destruction of private property will be dealt with on the spot.

“Peaceful protests will commence after the clean-up but will only be confined to designated locations. There will be no procession or street march. Marching on the streets will not be tolerated as not to give room to mischief makers to breach public peace.

“We are, at this moment, issuing a warning that any hoodlum or rented thug found at the venue of any protest will be mercilessly dealt with by the people. We urge them to steer clear or better join us in the clean-up and peaceful gathering afterwards.

“Anybody found wandering near a bank or loitering with intent will be moved on. People will not be allowed to assemble near a bank or financial institution. No act capable of breaching the peace will be tolerated from Monday, October 26, 2020, onwards.

“Protests and gatherings will be held, but it must be peaceful and orderly. No criminality of any form will be condoned, either from hoodlums, hired thugs, the police or the army. Everybody must be well behaved.

“We hope that protests across Biafraland and Nigeria would continue until all demands made by the leaders of #EndSARS movement met in quick time.

“We urge all youths who have been intimidated into submission by security agencies, especially in Abuja, to return to the streets from October 26. We warn every thug belonging to criminal politicians and DSS hoodlums to steer clear of protest venues, or there will be a  mayhem.”