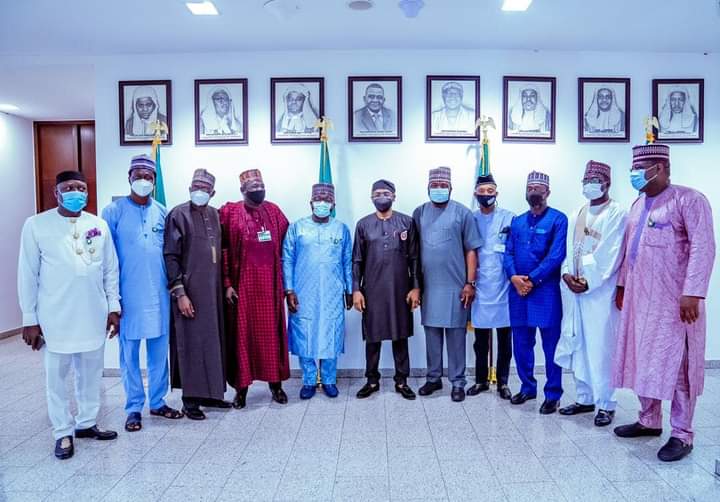 The House of Representatives is determined and ready to empower the Nigerian youth to make them competitive globally, the Speaker of the House, Rep. Femi Gbajabiamila, said on Wednesday.

In a statement on Wednesday signed and made available to Journalists by Lanre Lasisi, Special Adviser on Media and Publicity to the Speaker, House of Representatives, said Gbajabiamila said issues concerning the Nigerian youth have been a priority to the 9th House, which was the reason behind several proactive measures to address them, even before the outbreak of the recent youth protests around the country.

This emerged when Speaker Gbajabiamila met with a group of young lawmakers from the House under the aegis of ‘Young Parliamentarians Forum’ of the National Assembly in his office, where he reiterated that some of the demands of the youth following the EndSARS protests would be addressed constitutionally.

“All of us, every segment of the government, especially the House of Representatives, that before the protests took the initiative, debated motions and took far-reaching decisions on the floor.

“Part of the decision was to reform the Police to accommodate a better, more reformed Police.

“We gave ourselves 30 days, and since then, we’ve been working night and day, especially with the Nigerian Bar Association (NBA).

“We thought the best way to go about it is that we amend the Police Service Commission Act, and that has been done and the report has been concluded and soon, it will be published and be on the floor.

“We are determined to resolve the Academic Staff Union of Universities (ASUU) matter, and if we can resolve two out of three issues, I think we would have gone a long way to help the lecturers who are on strike.

“There’s a bill on vocational education, I think from the 8th Assembly that was even my bill. We’ll pick it up again and pass it to you (Young Parliamentarians Group) to polish it up and add it to whatever ideas you have”.

On youth empowerment, the Speaker said though a lot still needs to be done but that the present government has done a lot.

“I make bold to say that no government, in Nigerian history from inception, and I stand to be corrected, has put in as much in youth empowerment as this present government.

“Facts don’t lie, a government that has devoted N500bn to youth empowerment every year. There’s Trader Moni, N-Power, and several others, they are all there.

“This government has done a lot about youth empowerment and is ready to do more. We can never be bereft of ideas. If you have anything that we need to look at, the House is willing and ready to add to those ideas.

“We will be happy to accelerate bills on youth development”.

Earlier, the young parliamentarians commended the leadership quality of the Speaker for his various interventions on national issues.

The leader of the delegation, Rep. Kabir Tukur a, noted in particular, the proactive measures taken to address Police reforms and EndSARS demands.

The young federal lawmakers also commended the Speaker for his interventions on labour issues in health, education and power sectors.

While presenting the demands of the group to the Speaker, Rep. Tukura said their major concern was a lasting solution to youth restiveness through the allocation of more resources to youth-related matters as well as education, especially vocational training.

The group also noted that the youth should be given a sense of belonging in government through better representation to enable them to bridge the existing gap, which was part of the reasons for the recent unrest.

To this end, he said, the group would be seeking the amendment of Section 171 of the Constitution to reflect federal character in accommodating the youth and people living with disabilities.

While informing the Speaker of the group’s request for an emergency session of the House to discuss its demands, Tukur also added that the group would be seeking his support for the group’s push for the establishment of a National Youth Development Commission.

READ:  NSG To Train 1,300 Youths On Tailoring Across The State, 100 Each Of The 13 LGAs
Continue Reading