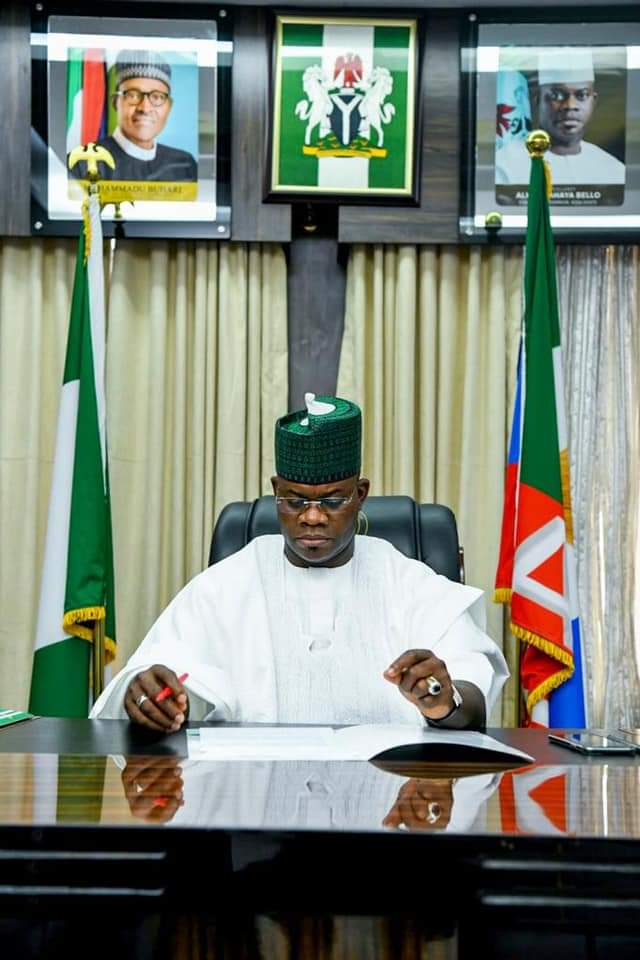 Kogi State Governor, Yahaya Bello has felicitated with Muslims in the state and across the world over this year’s Eid-El-Maulud celebration, urging them to embrace a life of peace and eschew all forms of violence.

The Governor also called for intensified prayers and sober reflections on the challenges confronting the nation, noting that through our collective prayers for country and its leaders the efforts at sustaining peace, unity and progress would be fully actualized.

The Governor gave this charge on Thursday in a press statement by his Chief Press Secretary, Onogwu Muhammed in commemorating this years’ occasion of Eid-El-Maulud celebration.

He stated that Prophet Muhammad (SAW) in his lifetime preached peace and also lived peacefully without respite to any individual or religion, noting that true followers of his teaching should imbibe such act.

Governor Bello also asked that youths across the state and nation to remain committed to the lofty dreams of one Nigeria as they remained peaceful and orderly in their conducts, affirming that these were principles that could guarantee progress and development in the country.

The Governor similarly expressed his administration’s commitment to ensuring the safety of lives and properties of its citizens and a continued promise to frontier more developmental strides that would be beneficial to all and sundry.

Muslim ummah has been advised to put into consideration the Qur’anic recitation as Sunnah of the Holy Prophet Muhammad (SAW).

The cleric urge parents to enroll their children into the Islamic education added that the importance of the Holy Qur’an will earned them good rewards in future.

On his part, The chairman Local Organising Committee (LOC), Alhaji Usman B. Ahmed appreciated all invited guests and dignitaries who grace the important event.

He however, warned the participants to be mindful of their utterances and abide by rules of the recitation in order to avoid unnecessary blame on the judges for their inability to make it final stage.

Also speaking at the occasion, the chairman, Jama’atul Nasrul Islam (JNI), Alhaji Saidu Dikko, expressed satisfaction with the level of peaceful coexistence exhibited by the scholars and teachers especially towards inculcating moral value into the participants during their coaching time.

According to Hon. Dikko, the competition is taken place at the regional headquarters of the local government area, which he name Toto, Umaisha and Gadabuke respectively.

The event had in attendance students, teachers and scholars within and outside the LGA.

An Islamic group in Okene local government area of Kogi state, ‘Righteous On-Lookers Association’ has raised alarm over threat to peace following the lingering crises rocking the area on the appointment of Chief Imam.

Worried by the ugly situation, the group has appealed to the National Security Adviser, (NSA), Major General Babagana Monguno (rtd), to prevail on Kogi State Government to put in place procedure for the appointment of a substantive Chief Imam of Okene Central Mosque.

The appeal was contained in a letter addressed to the office of the national security adviser titled “Security alarm -The pending leadership crises over Imamship of Okene central juma’at mosque” signed by the patron of the association , Ahmed Adoke copies which were made available to newsmen in Okene on Sunday.

Adoke lamented that the yet to be resolved Imamship crises has pitched two Islamic group; the Tijaniya and Ansarul Islamic Society of Nigeria in the area against each other as a result of disagreement on the mode of ascension to the position of Chief Imam of the central Juma’at mosque in Okene.

According to him “Our concern is that instead of addressing the mode of ascension that has generated palpable tension, Kogi State Government waded in and appointed one of the contenders as acting chief Imam for an indefinite period.

“Thus giving the appointee an undue advantage over other contenders, a situation that seems to have generated more tension in the area.”

He pointed out that part of the consequences of Kogi State government’s action was the recent violent clash between supporters of the two Islamic groups putting the area in an unnecessary apprehension.

While calling on the State Governor, Alhaji Yahaya Bello, to as a matter of urgency do the needful to avoid further crises that can snowball into massive killings and destructions of property, Adoke cautioned that religious crises can be more disastrous than political crises if urgent steps are not taken.

“As much as we appreciated and commended the quick intervention of the state governor , His Excellency Governor Yahaya Bello immediately after the demise of Late Chief Imam Alhaji Musa Galadima, we still appeal to your honourable office and other Islamic Authority to act promptly in order to avert further crises against the existing peace we are enjoying in Kogi State.

“This association is of the candid view that the leadership (Imam) crises has gotten to a level that calls for attention of your respected office, especially when considered the fact of the strategic location of Okene town as a gateway between north and southern parts of the country” he said.

While appealing to the two warring Islamic sects to exercise utmost restraint in the interest of peace and the comfort of Islam that both parties propagate, Adoke drew the attention of those fuelling the crises directly or indirectly to bear in mind that the consequences of any crises can not be underestimated, noting that “no one can predict the end result”

Pastor Gifts Woman Cash After Delivering Her Of Throat Cancer

The woman who gave birth shortly after the death of her husband was severely suffering from throat cancer, feeding from hand to mouth until her encounter with the man of God that put final rest to her disturbing predicament.

Gideon offered a cash gift of Fifty Thousand Naira (50,000) to help establish small business, also promised the sum of fifteen thousand Naira (15,000) on monthly basis as part of his contributions to the well-being of disadvantaged people.

The woman who was overwhelmed with joy and euphoria while receiving the cash gift, noted that she never expected such magnanimity from a man of God, as such is rear in the present days, she further explained how she has continually visited many places in the search of solution to the difficult often experience in her throat.

” I don’t know where to begin from, I haven’t encoutered such show of love before, until this time, may Almighty God bless the prophet and appreciate him abundantly for coming to the aid of my kind” she said