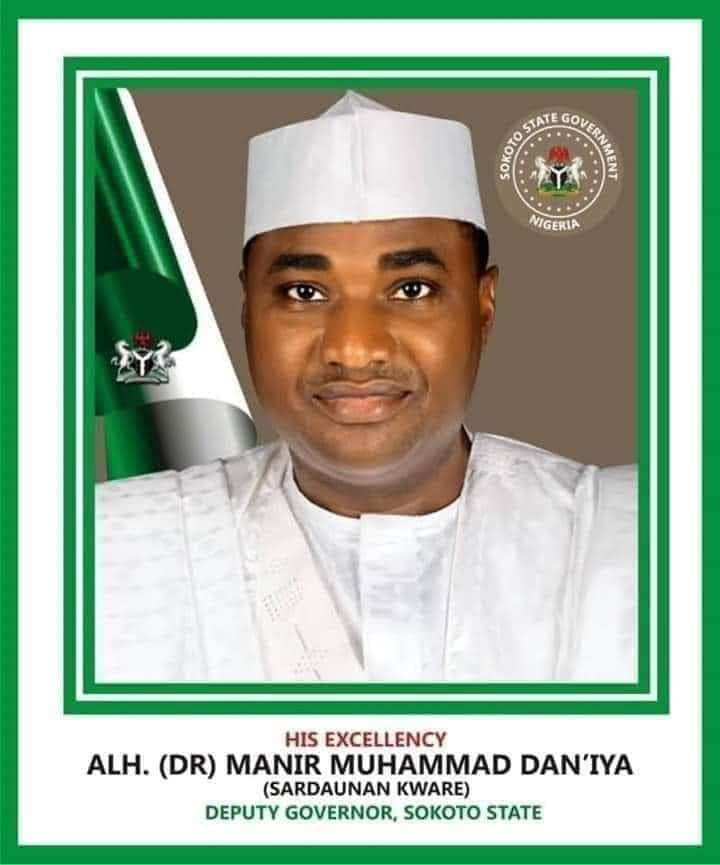 The Deputy Governor of Sokoto State, Hon. Mannir Muhammad Dan’Iya has described the State Governor as his political pillar just as he noted that the Sultan of Sokoto is his spiritual role model.

In a statement signed and issue on Friday to Journalists, Aminu Abdullahi Abubakar, Director Press to Sokoto State Deputy Governor. Said after the official receipt of a letter from the Sultanate Council of Sokoto informing him of his conferment of the Walin (Custodian of) Sokoto Caliphate (Culture).

The Sultan of Sokoto, Alhaji Muhammad Sa’ad Abubakar, had in a letter signed by him and referenced SOS/SMS/050/Vol. VIII/89, dated Oct. 29, 2020, conferred the title on the Deputy Governor in “recognition of your contributions to the Sultanate Council, Islam and the people of Sokoto state in general.”

READ:  COVID-19: How China's Handling Of The Coronavirus Crisis May Impact Its Relationships In Europe

Hon. Dan’Iya is the second Walin Sokoto after late Amb. Hamzat Ahmadu (1924-2016), a versatile diplomat, who was conferred the title by the late Sultan Sir Siddiq Abubakar III (KBE)(1903-1988), the 16th Sultan of Sokoto, father of the current monarch. Amb. Hamzat held the position for 34 years.

Expressing appreciation to the Sultan of Sokoto, Alhaji Muhammad Sa’ad Abubakar, the Deputy Governor said he was humbled by the symbolic and historic gesture.

According to him, “I owe this singular honor to Allah, the good people of Sokoto State and my leader, Gov. Aminu Waziri Tambuwal, who through thick and thin stood by me.”

“My appreciation also goes to the Sultan, who in consultation with his Councillors appointed me to this exalted position” he added.

He further added that “having been esteemed recipient of the honor and privilege of the Sultanate Council and the good people of our state, the onus, is no doubt on me, my family and clan, to redouble our efforts in contributing to making Islam greater

“Equally, the unparalleled support of my leader and his granting unfettered access, now lives me with no option but to be more devoted to the development of our great state,” the Deputy Governor emphasized.

READ:  "Shall We Continue To Fold Our Hands" ---- Keffi Youth, Lawal Danmusa Ask Sen. Adamu To Emulate Others Leaders.

READ:  Wike To Journalists: Quit Giving Us Awards, Tell Us Where We Have Failed So We Can Sit Up
Continue Reading