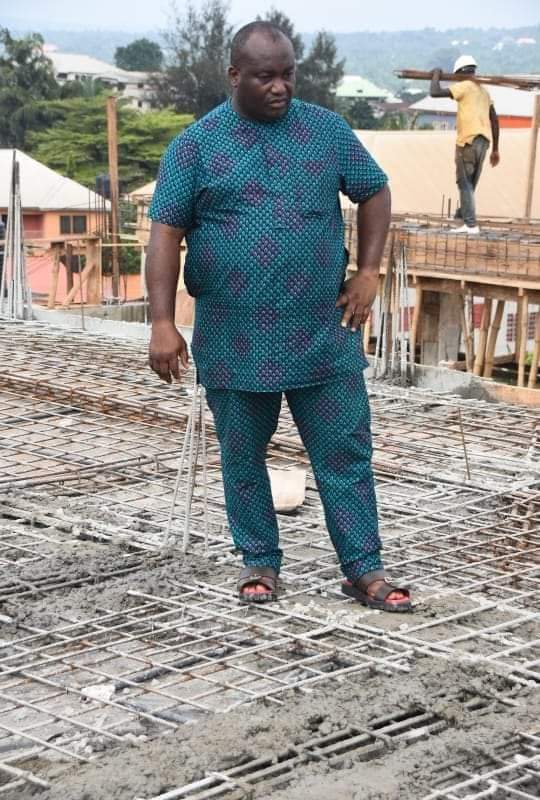 A state of the art Radio Station, Authority 91.9 FM, with a very powerful signal that is received all over the state and beyond.

A five storey building at completion level billed to house a digital television station with DSTV, NBC and other licences already secured.

A printing press with latest state of the art machines.

Singlehandedly building, and about to complete a Cathedral for the Catholic community (a project that usually entails hundreds of parishes that comprise a Cathedral, contributing monies for several years to collectively build ) .

All situated in Anambra State.

All providing and still poised, to provide even more employments for thousands of our youths in Anambra State ..

After all the propaganda and english speaking oratorical displays.

After all the good sounding political promises of…..

“I will fire the Nike, and water the Nike ” by smooth talking politicians.

When push comes down to shove,and that your favourite aspirant is asked to showcase in practical terms how he has been able to create employment for his people on a personal level .How will he fare ?

Onye ako jugho mbubo, ona aza Eze Odimegwu ? ( a man that is incapable of filling his barn with yams does not answer the revered title of Eze Odimegwu in the olden days in igboland when ownership of barns filled with yams were the yardstick for measuring capacity ).

Before you come to argue that wealth creation is not the only yardstick for determining administrative sagacity, do well to know that good grammar speakers have never fared well in leading this State to eldorado and our people are now fed up with their usual rhetorics .

We are tired of people that come with altruistic intention, only to get derailed by the magnitude of the challenge, they encounter on taking charge of the state .

This is an era of recession in the country and a time when we can no longer afford greedy politicians, that will want to line their personal pockets with scarce state resources and then bribe our youths with incentives and baseless SA appointments in exchange for insulting stakeholders of the state.

We want a man that has the clout, to beckon on state stakeholders, and the numerous billionaires and millionaires that our dear state is blessed with, and they will respond and work together for the development of the state

We are going for a man with the necessary native intelligence, business and commercial entrepreneurial background, with the necessary know how of the intricacies involved in triggering the now comatose economy of the state back to life and full throttle.

A man that has visited places, and has friends cut across all the age brackets, practically in all the nooks and crannies of the state

A man that can walk into any part of Anambra and get recognized and welcomed by a genuinely excited crowd of youths and aged alike all screaming “Ebubechukwuzo !!! ”

A man that will restore the glory of the commercial state of Anambra, by placing the State on the map of most developed economies in Africa…..

A man that is poised to create a mini nation that the rest of the country will turn to for supplies of their daily needs .

An Anambra with fully functional independent power projects, that delivers light to the various industries and the entire state 24/7

An Anambra where students can go on vacation jobs during holidays by working in the industries and factories duly equipped with well constructed dormitories that will be attracted to the state courtesy of the favourable ease of doing business opportunities, that will be put in place by the Government of the day that understands exactly what a fellow business entrepreneur needs in order to flourish.

An Anambra with not just a befitting capital city that will be the envy of all. But with two other equally developed and well planned cities of Onitsha and Nnewi ( being the commercial hub centres where the several markets and industries are located ) .

An Anambra where the tourism industry will be rejuvenated and brought back to life and where families outside the state will look forward to their Xmas returns with excitement. Where coming home for Xmas will go beyond merely visiting the villages but will also entail families planning vacation visits to the various tourist sites like the Ogbunike cave etc, that will be playing host to fun seekers .

An Anambra where the era of celebrating mundane things like mere payment of salaries and patching of roads with engine oil and Cement will be a thing of the past, never to reoccur in the state again

An Anambra that works !!!

Courtesy of an idea bearer and capacity laden servant leader

#GosimKamfunanya is the pass code .

It is a #DivineMandate powered by a youth driven #OpenDoorRevolution.

2023: Dakuku Peterside; Where Are The Political Masquerades?

Kogi Gov. Salutes Women Gallantry In The Fight Against Insecurity In...

Drama As Policemen Shut Down Hospital For Admitting Coronavirus Patient

How Buni’s interim Committee Save APC From Implosion

How many lions needed to be killed to name Gov. Bello,...