According to history Since return of democracy in 1999 the emergence of different political office holders in Nasarawa State, particular from the western region of the state none had performed credibly and to the expectations of their people as Hon. Ishaq Ahmed Kana.

Many have comes onboard to contribute their quota but Hon. Ishaq Ahmed kana’s era overwhelmed others with achievements cut across board.

Hon Ishaq Ahmed kana unlike other politicians who seek reelection into same political offices he always look ahead and paving way for younger generation to take leadership positions to contribute their quota.

He formerly served as DG Protocol to Governor Abdullahi Adamu, former State Assembly member where he represented the good people of Kokona constituency and House of Representatives Member representing Karu, Keffi and Kokona federal constituency. His aspiration was not born out of greed or thirst for power rather a genuine offer to serve his people at different capacity.

His achievements so far:

While at the National Assembly his achievements was described as outstanding considering the impact he has recorded on the life of the common man on the street in his constituency and beyond. Despite outright cut in salaries and other related allowances he was able to provide for his people.

Though, his primary responsibility as a representative is strictly to make laws for the good governance of the people; Hon. Ishaq Ahmed kana defied all odds by providing and sponsoring the following:

Distribution of free wheelchairs to some hospitals and clinics across the three LGAs that made up the constituency.

Free medical outreach to the people in his constituency a program he sustain in the area for every quarter of the year.

Sponsor Free treatment of patients in some major hospitals in Keffi, Kokona and Karu LGAs

Considering the important of education in transforming the society, Hon. Ishaq Ahmed kana embarked on massive investment in the sector with sole aimed to assist the teeming youths;

Distributed over 128 Laptops to some students in the three LGAs

Payment of WAEC/NECO worth over 3.5 million in his constituency a program that have brought great relief to the parents these beneficiaries, this is in addition to the well-organized scholarship scheme that will soon commence.

Secured admission into higher institution of learning to over 400 candidates within and outside the country.

Renovation of block of 2 Nos classroom with a well furnished office at Panda Development Area of Karu LGA.

Construction of 3 Nos Block of classrooms with an office attached at the Federal Government College, Keffi.

Hon. Ishaq Ahmed kana consider women empowerment as the center-point of approach to social welfarism. In view of the above consideration, he was able to provide the following:

The persisted problem of electricity then has been teething not only in his constituency but in the whole country. The obsolete nature of transformers has been a source of worries in the area. In view of the fact that he embarked on the following:

Purchase and installation of 37 Nos of Transformers

Electrification of Gora, Roguwa to Saka

READ:  Don’t Get Angry When Am Insulted, I Am A Product Of Insults -- APC National Leader, Bola Ahmed Tinubu React.

Considering the role of youth as the engine commanding height of the economy, Hon. Ishaq Ahmed Kana decided to identified himself with them in the following areas:

Secured employment to over 76 individuals at different capacities within the State and FCT, Abuja.

His Intervention in this area earned him the named “Grand Commander Of Social Welfarism In Nigeria”.

Distribution of variety of grains during festivities such as Christmas, Ramadan, Sallah and other ceremony worth 26 million naira. 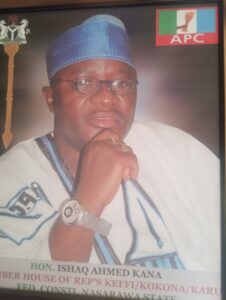 Distribution of Rams, Goats and Cows during festivities

Provision of 100/50 landed properties to several well-wishers and campaign team; Over 220 people benefitted from this gesture.

Sunk over 140 functional motorized boreholes at situated across the constituency.

Obaseki’s Divide And Rule Manifesting In Edo, As PDP Hard-Liners From Atte Decamp To APC In Akoko Edo LG.

No To N2.4 trillion cash handouts

Open Memo To The New EFCC Chairman, Abdulrasheed Bawa As He...