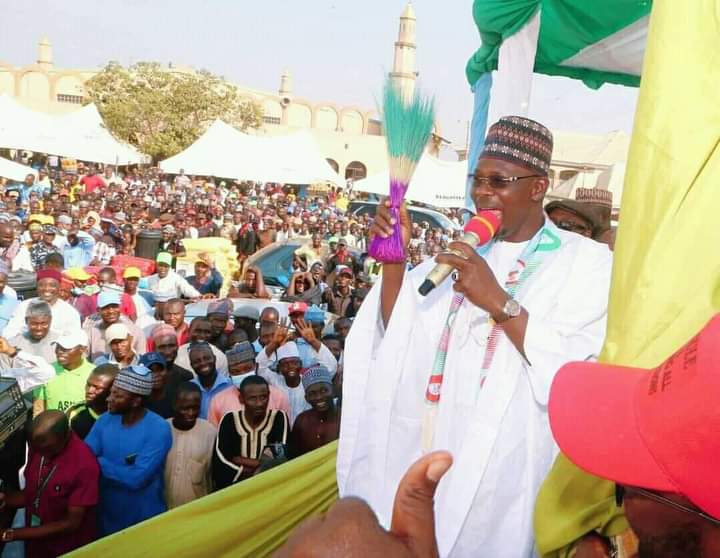 Members of the Social Democratic Party (SDP) on Sunday pitched their tent with the ruling All Progressives Congress (APC) in Nasarawa State.

The event Held at the Emir’s place in Keffi Local Government Area, the defectors were led by a former National Assembly member, Hon. Ishaq Ahmed Kana and lawmaker representing Keffi East at the State house of Assembly Hon. Abdul’aziz SK Danladi into the party.

The Caretaker committee Chairman of APC in the state, Mr. John Mamman, led a high-powered delegation of state executive council of the party to Keffi to receive the defectors into the party.

Mamman, who handed over the party’s flag to Hon. Ishaq Ahmed Kana, Hon. Abdulaziz Danladi SK and other notable chieftains commended them for returning to APC and said the party would continue to deliver dividends of democracy to the people, adding that the defectors should return to their wards for registration.

The ceremony was attended by the dignitaries included the National Assembly meHeers, State assembly members, APC Caretaker chairmen, women leaders across the State.

The member representing Keffi East and Chairman house Committee on works and transport, Hon. Abdulaziz Danladi SK who was one of SDP leaders that defected to APC said the Governor’s effort aimed at providing dividends to the people of the State informed his decision to pitch tent with APC.

He also pleaded with Nasarawa youths to join hands with Governor Sule led administration to take the state to an enviable heights.

He appealed with the youths to shun the social media attacked and prayed for success of this administration.

The youthful lawmaker used the medium to empower some party loyalists who have distinguished themselves and work for the party progress, program and activities of his office.

The lawmaker promised to sustain the gesture and call for more Support to enable him to do more for his people.

Hon. Ishaq Ahmed kana, who was a former Governorship candidate under the platform of SDP and a strong loyalist of a former governor of the state, Senator Abdullahi Adamu, said he defected from SDP to APC based on the excellent achievements of the state governor, Engineer Abdullahi Suleiman Sule.

He stated that he joined APC because of the good governance Sule led administration has been rendering to the people of the state, adding that the governor has not disappointed the people who thought he would fail based on the fact that he came straight into governorship seat from the private sector.

Kana, explained that he has been in politics for up to 4 decades in the state adding that he and other notable political leaders passed through the school of politics of a former governor of the state, Sen. Abdullahi Adamu, who have been the one determining whoever that would win any election in western zone, irrespective of political affiliations.

He said he, and more than 5,000 followers decamped from SDP to APC and would work assiduously for the continuation of good governance in the state and success of the party in the State.

Hon. Kana appealed to the State Governor to Intervene by finishing some of his projects embarked when he was at the Assembly which included, Karu Electrification Project: Gunduma to Gitata, uninstalled transformer at Gora (Nike), Sabo Gidan Mallan Ango to Pambarau. And Kokona, Angwan Doka, Jama’an Alu, Kofar Gwari to Bakin Ayini Village still uncompleted.

Construction of seven Kilometers road from Amba to Bakin Ayini not completed and this has been given sleepless night calling for his urgent Intervention.

The senator representing Nasarawa West Senatorial District and former Governor of the State, Alhaji Abdullahi Adamu has hailed the decisions of the SDP leaders and its followers to return back home in order to join hands with the Governor to deliver on his campaign promises which he has started.

Adamu described their decisions as timely and a huge progress on the side of APC. Assured them of equal treatment.

The Senator who is more concern about the Governor’s second term bid, stating he and critical stakeholders from the western region have agreed to support

On his part, the State Governor, Engineer Abdullahi Sule in his brief addressed commended the defectors for their wise decisions to rejoined their promising to carried them along.

He also brief the gathering what his administration has achieved in area of infrastructure, security, education, healthcare, agriculture, youth and women empowerment among them.

Members of SDP that defected to APC included the leaders from the 3 senatorial districts of the State.

Hon Muhammad Mudi was born on the 1st April 1960 into to the family of Mal. Mudi Muhammad, The Chief Imam of Diko, Suleja Local Government, Niger State.

He Attended LEA Primary School Diko in 1969-1975 and Proceeded to Government Secondary School Kuta in 1975-1980, He went further to Federal School of Arts and Sciences Suleja in 1980-1981 and later got admitted to the Prestigious University of Sokoto(Danfodio University) Pre-degree studies in 1981-1983.

After Completion of his Pre-Degree Program he then gained full admission as Undergraduate Student at the University of Sokoto (Danfodio University) where he studied and graduated with Bsc Hon Management Studies in 1983-1986.

As a Young and Brilliant manager, He Proceeded to further his Education.

He later enrolled into Great University of Lagos Akoka Lagos, where he studied and Awarded with Masters of Public Administration in 1998-2000.

Hon Mudi Muhammed did his NYSC as a Classroom Teacher in Amper Community Secondary school Amper, Plateau State in I986-1987.

He was employed as Assistant Superintendent of Immigration in 1988 and was called back by his community the good People of Suleja to join active politics in the year 2001.

Because of his exhibiting very high level of performance and loyalty he was then elevated to the position of Director General in Ministry of Women Affairs and Social Development Niger State in 2004-2007.

In 2007, he went into the Private Sector and worked with EL- Muhmuod Nig Ltd as the Director of Finance and Administration.

Between 2007-2008, Following the 2007 General election a new Government came to Power with Governor Aliyu Babangida who found him worthy again to be saddled with the responsibility of monitoring the whole projects in Niger State, he was appointed Special Adviser on Project Monitoring between 2008-2010.

Some months later he resigned and went back to Private Sector as the MD/CEO of EL-Muhmuod Nig Ltd in 2010-2017.

READ:  Okene Administrator Felicitates With Engr. Ohere, Pharm. Asuku, And Others On Their Appointments

With The amalgamation of various political Parties to form APC made him abandoned PDP and found his way to APC.

After the 2015 election, he was appointed as Commissioner for Mineral Resources 2017-2018 and later was made the Commissioner for Investment, Commerce and Industry between 2018- 25th May 2019..

He is married to a Beautiful wife and Children.

Based on his Track record and Trustworthiness he was appointed by the Executive Director of Chief Edward David Onoja Presidential campaign group for Governor Yahaya Adoza Bello 2023 as the Director of Finance in June 2021.

Hon. Abdullahi Aliyu Tashas, has emerged winner of the All Progressives Congress (APC) Chairmanship primaries in Toto Local Government Council of Nasarawa state, for the October 6, 2021 Council election in the area.

Chairmanship candidate of APC in Toto Local Government Area of Nasarawa state, Hon Abdullahi Aliyu Tashas, speaking with newsmen shortly after he was declared winner of the chairmanship in Primaries. Speaker of the state house assembly, Hon Ibrahim Balarabe Abdullahi, left looks on.

He said: “By the constitution of the federal republic of Nigeria and the electoral act, 2015, “I, Usman Bala, the retuning officer for the chairmanship primary election for Toto local government area of Nasarawa state,”.

“And by the power conferred on me by the electoral act, declared Abdullahi Aliyu Tashas, as winner of the chairmanship primaries for Toto local government area of Nasarawa state and is hereby retuned elected,” he said.

Speaking to newsmen over the election, speaker of the state house of assembly, Rt. Hon Ibrahim Balarabe Abdullahi, congratulated the entire people of Toto local government area and the winner of the chairmanship primaries as well as delegates that participated in the election.

Dr. Zakariya Shuaibu Lokogoma, one of APC aspirants and Hon. Abdullahi Aliyu Tashas Aquatic embracing each other shortly after the primaries elections in Toto.

He said he was impressed with maturity exhibited by all the three aspirants and their supporters for ensuring the exercise went on successfully without any rancour, saying the ruling APC shall emerged victorious at the polls.

Reacting, the chairmanship candidate, Abdullahi Aliyu Tashas, expressed delight and appreciated the party’s delegates for voting for him overwhelming during the primaries.

He also commended his opponents for accepting defeat at the primaries, while assuring that he will work closely with them to ensure the APC continue to wax stronger and emerged victorious during the October, 2021 council election in the area.

“Honestly, I am very elated for maturity exhibited by my opponents, as immediately I was declared winner, they both came and embraced me and I want to assure we shall work together as one family to move APC forward and ensure we win the forthcoming Chairmanship election by the grace of God,” he said.

The prominent Hajiya Shafa’atu Ibrahim Na’ala was born in the ancient city of Gusau, the State Capital of Zamfara State in the Northwest of the Federal Republic of Nigeria on the 17th May 1977. She was successfully brought up by the same famous and reputable family in Zamfara State called ” Na’ala Family”.

The great Shafa’atu Ibrahim Na’ala went to the most peaceful University in Nigeria, the Usmanu Danfodio University Sokoto where she had Bachelor of Science Education Economics in 2008. A diploma in computer 2011 and currently Masters Degree in Guidance and Counselling with the National Open University of Nigeria as she is as well a Lecturer at Zamfara College of Arts and Science GUSAU (ZACAS).

Hajiya Shafa’atu Ibrahim Na’ala has marvelously championed her passion for advocating women’s participation in active politics with a view to having due rights for the entire Women folks and Children.

She is however an entrepreneur who has been committed to activate women’s zeal to entrepreneurship for self-reliance and socio-economic growth of the Federal Republic of Nigeria.