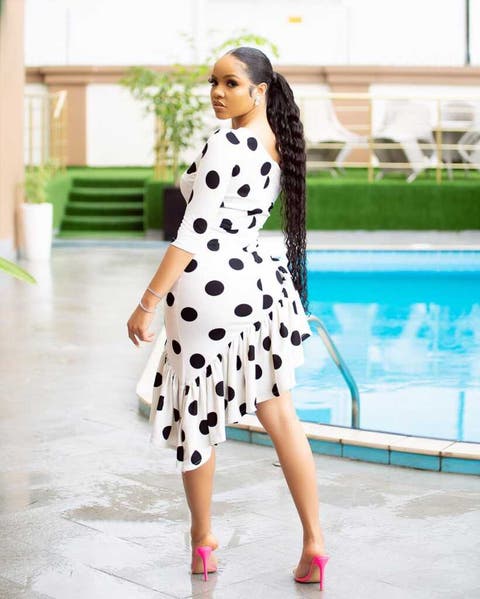 Big Brother Naija star, Nengi Rebecca Hampson has advocated for body enhancement surgeries, saying that if it will pleases their body.

The former beauty queen recently encouraged her fellow ladies to do whatever pleases them to their body, even if it is plastic surgery.

The finalist of the 2020 of the most watched African reality TV show, gave this remark in a recent interview. According to her, we are past the age of stigmatization against women that do plastic surgery to enhance their body.

She said in a recent interview with The Punch,

“I think we are past the time when women were expected to be ashamed of what they did with their bodies. I believe that if you want anything and you can afford it, don’t hesitate to get it,”

It should be recalled that Nengi opened up during the reality show that she enhanced her body anatomy through surgical enhancement.

Leader of the delegation, Ibrahim Ibrahim Mudely said they were in the palace to formally notify the monarch of their presence in Toto and as well pay homage as a father of all.

According Mudely, their visit to Toto was to equally present Queen Halimat A. Okpanaki (Ongaziya Oweyi) The Miss Culture and face of Egbura Nigeria to the King for his fatherly blessings.

READ:  BBNaija 2020: Nengi Open Up her Feelings For Laycon

He said while in the palace to pay homage as tradition demand they deem it fit to present fruits for opening of fasting to the King.

Responding, the Onah of Toto, Alhaji Muhammad Umar Azaki appreciated the Egbira artists for their open show of love and Commitment towards projecting the good image of the Egbira nation, urging them not to relent in the direction that their reward will soon trace them handsomely.

The second class ruler, expressed optimism that the Face of Egbira will live long to achieve more for the Egbira nation, however, said Producing a good Queen in Egbira kingdom demand total commitment and sincerity of purpose, he said their talents now give direction to the Egbira youths and urged them not to deviate from such laudable Legacies.

“We appreciated your timely visit and we will continued to accord you all the necessary support you could ever needed to Succeed.

The award, presented during an elaborate ceremony in Lokoja, was conferred on Mr. Mudely in utmost recognition in promoting Culture and customs of Egbira race and vision having not only overseen strong support for the Egbira Entertainment industry in recent times but also guiding the industry to greater heights in a highly competitive industry.

READ:  "It Won’t Fit You Because Of Your Jaw" – Bobrisky Openly Mocked On Instagram

Our Correspondent Yahaya Idris who was on ground at the most attended ceremony report that the organizers, Isonis Group said the award presented to Ibrahim Mudely was aimed specifically at recognising his effort that made meaningful impact in supporting the growth of entertainment industry that are needed to foster healthy of the Egbira traditional entertainment.

Receiving the award Mudely described the award as a very clear testament of his contributions, not just to the industry but the entire Egbira nation.

While expressing his gratitude to the organizers, Group for the award, Mudely said that the award was not taken for granted.  “I am not taking this award for granted, it is a very clear testament to my contributions, not just to the entertainment industry but the entire Egbira nation, he said.

Mudely had also received an award as the best indigenous Artist of the year 2012.

Mudely earlier this year indicated interest to contest for the office of councilor under the platform of APC representing Akpasu electoral ward but unfortunately was not given the ticket of the party.

He is undergraduate and presently a holder of National Diploma with Kogi State Polytechnic Lokoja.

Nigerian Actor, Frederick Leonard Has Reveals Why He Was Still Single At 44

Nollywood actor, Frederick Leonard has opened up on why he is yet to be married at age 44.

Speaking in an interview with entertainment correspondents, the actor emphasize the need for couples to take their time and be more realistic in order to avoid broken homes.

“I want to be with someone who I have a lot of things in common with; someone I’m compatible with. I believe in the institution of marriage, and I think that people should be more realistic with themselves when it comes to picking a partner,”

He, however advised couples to studying their union proper before graduating into full marriage. He said.