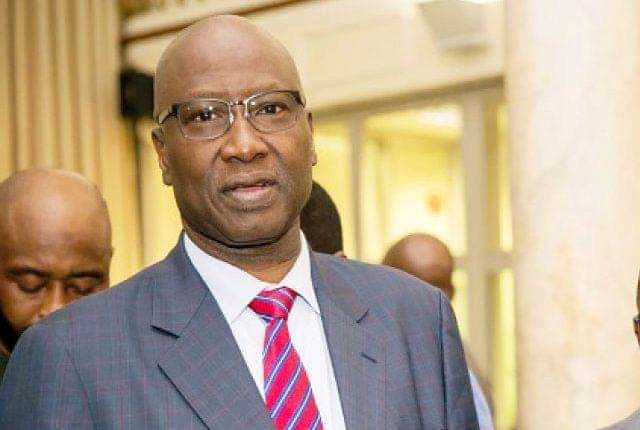 The secretary to the government of the federation (SGF), Boss Mustapha has disclosed that four of his children have tested positive for coronavirus.

Boss Mustapha, who is the chairman of the presidential task force on COVID-19, announced this during a media briefing in Abuja in Monday. He also said a family member who is one-year-old tested positive for the virus.

The SGF had gone into isolation last week after he was exposed to the virus. He said while he and his wife tested negative for the virus, his children are currently receiving treatment.

“The first test we ran, the result came back with six members within my household testing positive. The second test confirmed another three. From the month of March to November, we are being confronted with a figure of nine. It was quite a traumatic experience,” he said. “My wife and I consistently tested negative but members of the household were infected.

The last one, it was a nightmare. I was not infected but the truth about it, the agony of having members of your household… I am a father of four. All my four kids were infected.

“So, the agony that you go through even as a father, as a parent. A lot of you here are parents, so you need to do everything you can to ensure that you keep yourself and members of your family safe.”

Mustapha added that the spike in coronavirus cases is as a result of the consequences of certain occurrences in the last few weeks such as increase in social gatherings and disregard for health protocols.

The secretary to the government of the federation (SGF), Boss Mustapha

“A lot of discussion is still going on around the calls for the restriction of international travels due to the discovery of new strains of the virus in certain countries,” he said.

“The PTF, aviation and health authorities including the WHO are assessing the situation closely and would take a position as soon as cogent scientific basis are established

In an efforts to contain the outbreak of the Covid-19 pandemic, Minister of the Federal Capital Territory (FCT), Mallam Muhammad Bello, has banned Eid prayers at the National Eid prayer ground located close to the Abuja city gate, along the Umaru Musa Yar’Adua Expressway.

The minister, made the announcement in a statement by his Chief Press Secretary, Mr. Anthony Ogunleye, which was made available to newsmen in Abuja, on Tuesday, said the decision was arrived at a meeting of the FCT admistration and a delegation from the FCT League of Imams Initiative.

Ogunleye, said the delegation was led by its Chairman, Imam Tajudeen M.B Adigun, after they met the minister to discuss the modalities for holding eid prayers for the upcoming Eid el-Fitr celebrations.

According to him, all worshippers are enjoined to hold eid prayers outdoors within the premises of their neighborhood Juma’at mosques, while indoor worship are to be limited to less than 50% of installed capacity.

“And the religious authorities are advised to regulate the flow of people entering and exiting places of worship.

All non-pharmaceutical intervention protocols of facial coverings, physical distancing and hand washing are to be observed,” he said.

He also said that all other Eid celebrations and activities should be confined to homes as all public parks, recreation and entertainment centres are also to be closed,” he said.

The minister, therefore, appreciated the religious leaders for their cooperation in the battle against Covid-19, stressing that having gone through a first wave of the pandemic and a second wave that caused more fatalities, it was imperative to prevent a possible third wave as is being witnessed in some countries across the world.

“Consequently, based on presentations made by officials of the Health and Human Services Secretariat of the FCTA and the Implementation Guidelines for Phased Restriction of Movement issued by the Presidential Steering Committee on Covid-19 on Monday, 10th May 2021, we came up with the guidelines,” Bello said in the statement.

Speaking on behalf of the League, Adigun said “In Islam, you listen to experts, those who are specialists and those who have actually discussed with us are experts in the field of medical sciences.

In Islam, you also abide with the commands of leadership.

“Based on this and what we are convinced of, we urge Muslim Ummah to also respect this stand of the administration of the FCT by observing our Eid prayers within our localities,’ he said

As Nigerians join the rest of the world to celebrate World Lupus Day (WLD), FCT Minister of State, Dr. Ramatu Tijjani Aliyu, has identified enlightenment campaign or knowledge as a powerful tool that could defeat lupus or any existential challenge.

A statement duly signed and issue by Austin Elemue,
S.A Media To FCT Minister of State,
May 11, 2021, said the Minister stated this at the 2021 World Lupus Day held in the nation’s capital Abuja organized by the Arise Monalisa Foundation.

She specifically noted that in view of the complexities associated with this silent killer disease, public awareness and the impact that it has on the lives of those who are affected, must be scaled-up.

Aliyu, who described lupus as a common, but often overlooked disease, also lamented that lupus as a chronic autoimmune disease has affected approximately 5 million people globally.

The Minister who was represented by the Ag. Executive Secretary of FCT Primary Healthcare Board, Dr. Iwot Ndaeyo, stressed that the singular fact that lupus is one of the most severe comorbidities and could lead to end-stage kidney disease and kidney failure, makes it the more scary.

“The medical difficulties associated with diagnosing and treating a poorly understood disease have negative impact on those with lupus. This is further compounded by a low level of public awareness and the fact that most symptoms of lupus are not visible to others. Collectively, these can lead to a greater emotional burden for patients,” the minister stressed.

She used the occasion to caution against stigmatization of patients, noting that those who recognise lupus as a disease mistakenly believed that it is contagious, and that a poor knowledge like this could lead to unnecessary social stigma for patients with lupus.

While pledging the commitment of the Federal Capital Territory Administration to support any organisation or group aimed at bringing to an end the devastating impact of lupus, she, however, called on critical stakeholders to make lupus visible using every available medium to show the world the many faces of lupus and its impact on patients

Executive Director, Kogi state primary health care development agency, Dr Abubakar Yakubu, who briefed Journalists in his office on the progress made on the exercise , said despite the delay in the take off of the Covid 19 vaccination in the state, Kogi has surpassed many states in the administration of the vaccines.

“we have achieved about 75% target despite negative propaganda by mischievous elements who have been instilling fear of deaths in the minds of the gullible. But with the aggressive awareness campaigns, people voluntarily submitted themselves for vaccination. ” Dr Yakubu explained.

He said the 16,900 Astra zeneca vaccines arrived the state April 6th and by the 10th, the actual vaccination commenced after the take off ceremony at the state ministry of health, in Lokoja.

According to. the Executive Director, over 5000 health workers across the state being front liners were vaccinated, while over 7, 000 military, paramilitary and Journalists whom he described as on line also received the jabs.

While commending the traditional rulers for leading by example, equally thanked their subjects for their cooperation during the vaccination exercise.

Dr Yakubu therefore appealed to those who are desirous of being vaccinated to come forward as more vaccines would soon be provided in view of the growing demand occasioned by awareness.

He advise the people of the state to ignore those spreading fake news about the vaccines , describing them as the ” doubting Thomases”, whose stock in trade is to destabilize any thing good for the common man.