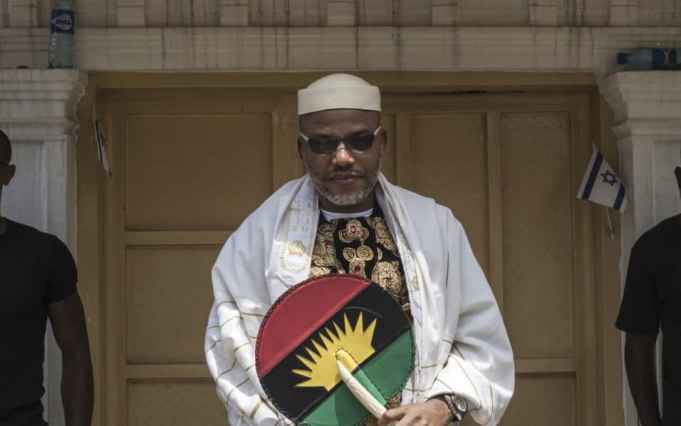 The leader of Indigenous people’s Of Biafra (IPOB), Nnamdi Kanu is presume to die of poison if he is not careful, Prophet Joshua Iginla has disclosed.

The founder and senior pastor of the Champions Royal Assembly, a mega church which meets in an 80,000 seat auditorium in Kubwa, Abuja, Nigeria’s capital, Prophet Joshua Iginla, has warned that the leader of the Indigenous People’s of Biafra (IPOB), Nnamdi Kanu, may have to be careful of betrayal in the year 2021 or he would be killed through poison.

It was learnt that Kanu who is also the Director of Radio Biafra, station propagates Biafra gospel, has been the main advocate for creating an independent state for the people of old Eastern Region of Nigeria through referendum.

The IPOB leader has been a target of the federal government of Nigeria led by President Muhammadu Buhari, who has variously accused the pro-Biafra activist of promoting insurrection.

In the 2021 prophecies released by Prophet Iginla, Kanu revolves round poison, orchestrated through heavy financial inducement amongst his followers.

Prophet Iginla said in his 2021 prophecies that: “The agitation for Biafra will wax very stronger. And we need to pray strongly because it will take a dimensions that will provoke the government of the day to begin to haunt the agitators.

READ:  Nasarawa Speaker Says Death Of His Elder Brother was Painful, Shocking And Unfortunate Considering His Role When Alive

“The agitation will grow stronger and will influence alot of chances of the people from the eastern part of this country . Nobody should look down on the Biafra movement.

“Like I keep shouting from the beginning that dialogue is the key. There is no bomb, gun or force that can stop such ideology except maturity applied for dialogue.

Here are the man of God’s Prophecy regarding Nnamdi Kanu.

“THE LEADER OF THE BIAFRA SHOULD BE CAREFUL. THERE ARE PEOPLE AROUND HIM THAT ARE TRAITORS. I SEE SOMEONE RECEIVING HUGE AMOUNT OF MONEY IN OTHER TO END THE LIFE OF THIS YOUNG MAN ( KANU) THROUGH POISON. I SAW IT CLEARLY, SOMEONE IN THE INNER CIRCLE.

“The movement will grow big and they felt the only way is to remove the head. Like I said, there is need to dialogue. The only way to appease it is to come round table to talk.”

In his message to commemorate the 2021 Eid-El-Fitr, His Excellency, Dr Sama’ila Yombe Dabai mni (Tambarin Zuru), the Deputy Governor of Kebbi State has charged Muslim faithfuls around the globe on peaceful co-existence and implore the virtues of Holy Month of Ramadan and beyond.

While fielding questions from journalists after Eid El Fitr prayers on Thursday, Dr. Samaila Yombe Dabai used the medium to commend the efforts and leadership of President Muhammadu Buhari and Governor Bagudu of Kebbi state respectively.

The Deputy Governor further extended warm appreciations to Royal fathers of Kebbi State for their regular support to the policies and programs of the State Government.

On insecurity situation in the State with emphasis on Kebbi South, Sama’ila Yombe Dabai stressed that Governor Abubakar Atiku Bagudu will not relent on the efforts of the State Government toward sustaining the peace while using the medium to call on bad elements launching attacks on the innocent citizens to either stop or face full wrath of the law.

The Deputy Governor prayed for the repose of all departed souls while renewing his call to see the prime purpose of life here on Earth and hereafter.

Recognition will always come to the diligent and the selfless. Sometimes, it comes from outside one’s community or from within, as is the case with Dr Isah Salifu.

Dr Salifu, ECOBANK zonal manager, was yesterday  conferred with the traditional title of Omachi Ejeh of Dekina. To some, it may just be a title. But to the Igalas, it holds a lot of importance.  Its meaning is Gifted Child. The title was conferred by no other than the Ejeh of Dekina and acting Chairman, Igala Area Traditional Council Dr Usman Obaje.

The monarch emphasized that the Zonal Ecobank manager Dr Isah Salifu  deserved the title for his unprecedented positive contribution to the development of Igala Kingdom and Dekina in particular.

READ:  Nasarawa Speaker Says Death Of His Elder Brother was Painful, Shocking And Unfortunate Considering His Role When Alive

The Monarchs who graced the auspicious occasion include His Royal Highnesses, Ogohi of Anyigba, Alhaji Shaibu Okolo, Oyeigba of Mozum, and others.

The recipient of the prestigious award, Dr Salihu, stressed that the Ejeh had demonstrated his passion and commitment to a united and egalitarian Society, “I am appreciative of the recognition of my contributions to nation building and I pledge my continued loyalty to Ejeh in  Council, Igala traditional institution Kogi State and Nigeria at large.”

Dr Isah said “The honour is timely and encouraging, insisting that the honour would encourage him to sustain his good works.”

The State Coordinator of the Group, Mr. Chinga Emmanuel made the remark during a meeting of the Group in Lokoja, the State Capital.

Mr. Chinga pointed out that since Governor Yahaya Bello assumed Office, alot of transformation has taken place in the State, ranging from rural electrification, road construction, appointment of youths into positions, among others.

READ:  YAN Diaspora Is Setting The Pace For Youth Development And Nation Building

The State Coordinator noted that Nigeria today, is yearning for change of leadership, stressing that Governor Bello represents the youthful mind the Country needs, assuring that if elected as President in the coming Presidential election, a lot of positive changes will be witnessed in Nigeria.

Mr. Chinga expressed optimism that the issue of insecurity facing Nigeria will become a thing of the past with Governor Bello leading the Country, assuring that the Group will not relent efforts at promoting the activities of the Governor to the the outer world and ensure his success at the Presidential polls.

He explained that few weeks after the inauguration of executives of Kogi State of the Group, over 3,000 members have been added to the Group, calling on all Kogites within and outside the State to join the movement.

Mr. Emmanuel stressed that the Group will continue to mobilize youths across the 21 Local Government Areas of the State to join the project, adding that Governor Yahaya Bello’s believe in the youths’ ability to deliver is second to none.