Reports reaching us at Globaltimesnigeria.com says a former Vice-Chancellor of the University of Lagos (UNILAG), Prof Oyewusi Ibidapo-Obe is dead.

Prof. Oyewusi Ibidapo-Obe died on Sunday afternoon at the age of 71, source confirmed.

The demise of the former UNILAG VC was announced in a statement by the Registrar and Secretary to Council, University of Ibadan, Olayinka O. Balogun.

Balogun said in the statement: “With heavy heart, and submission to the will of God I write to inform Council members of the transition to glory of Professor Oye Ibidapo-Obe, the Pro-Chancellor and Chairman of Council, First Technical University, Ibadan which occurred today.

“I pray for the repose of the soul of the departed.”

The elder statesman and business mogul, gave the assurance when the Executive Assistant to the Governor on Communications, Chief Dr Fred Latimore Oghenesivbe Esq, paid him a scheduled visit at his Okpare-Olomu country home in Ughelli South Local Government Area.

Olorogun Taiga, further asserted that the Okowa administration had rekindled the hope of Deltans in terms of Democratic dividends in representative government, noting that this administration successfully executed some key star projects namely; the reconstruction and upgrade of Asaba International Airport, and the completion and commissioning of the Stephen Keshi International Stadium.

Taiga expressed UPU’s gratitude to the Okowa administration for the juicy appointments offered sons and daughter of Urhobo extraction since 2015, and still counting, adding that Delta Central Senatorial District had her fair share in rhe reconstruction and renovation of roads network embarked upon by by the state government.

He urged Deltans and Urhobo Nation to support the governor and his team in prayers and whatever means legitimate and noble to enable him finish strong in 2023.

The UPU Leader and statesman disclosed that the Union is apolitical and will not meddle into mainstream politics, other than to ensure a transparent process in the choice of a would be candidate from Urhobo nation.

Taiga disclosed that UPU will set up a powerful committee, made up of eminent personalities in Urhobo nation, to screen all aspirants from all political parties in 2022, possibly the third week in the month of February, after the celebration of the 90th anniversary of the Union.

Olorogun Taiga, said UPU will not enter into unholy alliance with any political party or candidate either now or in 2023, pointing out that, the sad political events of 2015, which tend to paint the union as a political organisation instead of a sociocultural umbrella of the Urhobos shall be avoided in this dispensation, and in the future.

“UPU have reasons to say that Gov Okowa has done well. We can see the proof of his hard work and purposeful leadership; the stadium, the state Secretariat, the over 3,000 kilometers of roads and bridges constructed and rehabilitated, as well as, the Asaba Airport rehabilitation and upgrade, the YAGEP, STEP, RYSA and PROJECT GEST empowerment programmes which took over 150,000 youth from the congested labour market in Delta State, and made them breadwinners and small and media scale business owners.

“Okowa has done well but we want him to do more. He can still achieve substantially in infrastructure and human capital development. It is our hope and prayer that the people of Delta Central and every part of the state will continue to benefit from this administration. I commend governor Okowa for his good governance strides.

“The issue of the 2023 governorship election is also in the front burner. And I can tell you for free that UPU will set up a powerful committee to screen all governorship aspirants next year; say the third week in February, 2022. This is to allow for more aspirants from all the registered political parties to show up in the political stage for the number one position in the state.

“And I have made it abundantly clear that no executive member of UPU is permitted to serve in the screening committee of any other group or political lobby group, so as not to give the wrong impression that UPU screened members of a particular political party to the exclusion of others.

“We have sons and daughters in all the political parties, and it will be unjust and unfair to be seen to be partial in our activities in respect of the 2023 governorship aspirants screening.

In doing this, UPU door will remain open for consultations by all governorship aspirants from different political parties in the state. Those aspirants who are ready to consult UPU to articulate their manifestos and roadmap are now free to do so,” Taiga added.

READ:  Former Players Struggling as Coaches in Their Former Clubs

Olorogun Taiga, commended the EAC to Okowa, Fred Oghenesivbe, for being able to effectively stabilize the media space for good governance, while urging him to remain focused and dedicated to his assigned responsibilities, not minding few detractors who may want to dampen his spirit out of envy and jealousy.

Responding, Oghenesivbe thanked the UPU President for inviting him to his palatial home in Okpare, for the first time, adding that he was humbled that a global figure like Olorogun Taiga would invite him for dinner and to interface with him on state and national issues.

“PG general, I am humbled by this meeting. Your fist Deputy President General, Chief Dr Anthony Onokharigho, broke the news and I was like who am l to dine with the great Olorogun Moses Taiga. But here we are having good time together.

“I must commend your visionary leadership and the father figure roles you have been playing to redeem the image of UPU, which was radically fractured and undermined by the immediate past President General and his politically minded team.

“You have saved Urhobo nation from embarrassment and mockery inflicted on Urhobo Nation and UPU by sponsored political forces in the Union.

“It is my hope and the desire of our people that your administration will remain focused and devoid of partisan politics, not striking unholy deals with any governorship candidate or the Presidency, as was the case in 2015, which greatly shortchanged Urhobo nation, in the scheme of things,” Oghenesivbe said. 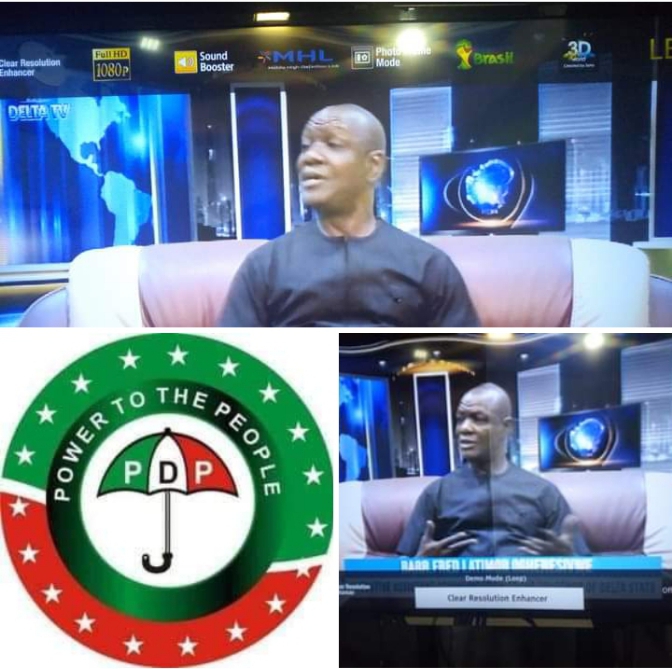 Executive Assistant to Delta State Governor on Communications, Chief Dr Fred Latimore Oghenesivbe Esq, has said that the Peoples Democratic Party, PDP, will effortlessly defeat the opposition party, the All Progressives Congress, APC, in the forthcoming governorship election in 2023.

He gave the assurance while responding to questions at a public affairs live programme on DRTV Asaba, Thursday 21st October, 2021, wherein he discarded the empty boasts by the Deputy Senate President, Senator Ovie Omo-Agege, while assuring the good people of Delta State, that 2023 will be the worst electioneering outing for Delta APC since 2015.

Oghenesivbe, who is also the Chairman and Leader of Coalition for Media Politics, CMP, stated that DSP Agege, had fraudulently attained the position of a political monarch and emperor in Delta APC, for single handedly using his powers and position as Deputy Senate President, to coerce and subjugate other leaders of the party to forcefully install his political adviser, Chief Omeni Sobotie, as State Party Chairman.

He noted that Agege who is nursing 2023 governorship ambition, and the new party Chairman, Sobotie, have a master-servant relationship which would to a large extent compel the servant (Sobotie) to do the biddings of his master (Agege) without recourse to due process.

READ:  Former Players Struggling as Coaches in Their Former Clubs

The Eacgovdelta described such relationship as being repugnant to good conscience and natural justice; unhealthy development which obviously negates the principles of internal democracy, and also revealed the desperation and self centered ambition of DSP Agege.

He further posited that PDP was way ahead of the antics and scheming of DSP Agege, and shall be humbled by the outcome of 2023 governorship election results, saying that the declared INEC results of past bye elections in the state clearly revealed that APC only exist on social media platforms and in the pages of newspapers, but certainly not on ground in Delta State.

The EACGOV further asserted that DSP Agege’s empty boasts was a type of Comrade Adams Oshiomole’s fake political permutations in 2018, wherein the former National Chairman of the APC, boasted that he was going to sack Okowa from Government House in 2019, to end the reign of PDP in the state.

Oghenesivbe said the governorship election results in 2019, subjected Oshomole to public mockery, he was subsequently sacked as APC National Chairman and relegated to the dustbin of political history, pointing out that, the foreseeable outcome of 2023 governorship election results will also humble DSP Agege, and just like Oshomole, he will be subjected to public ridicule because he will not return to the Senate and will not be governor in 2023.

READ:  Ayikwu Egbira Hails Nasarawa State Speaker Balarabe, Says He Has No Hands In The Alleged Removal Of DVC NSUK.

The renowned political communication strategist and media manager, predicted a bright future for PDP, saying that the incoming National Officers after the party’s national convention next week, will restore hope and confidence of party faithfuls which hitherto led to the premature sack of the former National Chairman, Prince Uche Secondus.

Oghenesivbe disclosed that his hope and ambition of becoming the National Publicity Secretary, NPS, of PDP in 2021, had been eroded, because the position was later micro zoned to South West in the process of balancing power equation in Southern Nigeria PDP family.

He however, thanked party leaders, CMP members, party faithfuls and admirers who mobilized support for his ambition to grab the position of NPS, while the micro zoning lasted.

He also touched on the Delta Central PDP Mega Rally taking place on Saturday 23rd October, at the Sapele Township Stadium, saying that the return to PDP of the former Speaker of Delta State House of assembly, Rt Hon Monday Igbuya, and former member of the Federal House of Representatives, Rt Hon Solomon Edoja, points to the fact that PDP is clearly the party for Deltans.

READ:  Chinese Factories Set On Fire After The Killing Of 38 In Myanmar's Deadliest Day Since Coup

“DSP Agege is day-dreaming and his empty boasts has classified him as a type of Oshiomole’s fake political permutations in 2018. Students of Typology should take note of Agege and Oshiomole’s scenarios in comparative political leadership.

“APC Delta is not on ground, it is only visible on social media platforms and in the pages of newspapers. And I dare to say that 2023 governorship election will be the last straw that will break the backbones of APC in Delta State. Agege will be retired politically, he will neither return to the Senate nor be governor in 2023.

“Former Speaker Monday Igbuya’s return to PDP and Rt Hon Solomon Edoja’s u-turn from APC to PDP attest to the fact that Delta is PDP and PDP is Delta State, coupled with the fact that APC national government under President Muhammadu Buhari, failed woefully to fulfil 2015 and 2019 electioneering campaign promises. 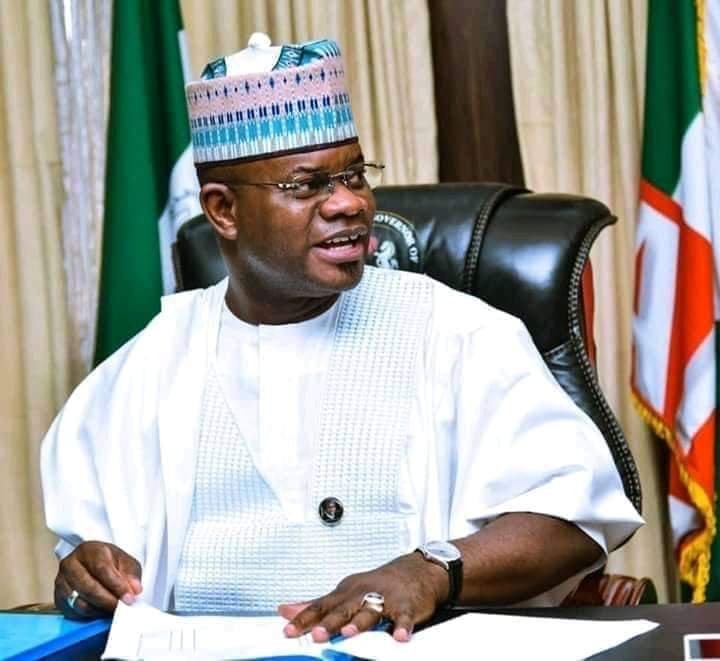 The State Security Adviser and Chairman of the security sub- committee, Retired Commander Jerry Omodara, gave the assurance while briefing newsmen on preparation for the prestigious event.

He maintained that the present administration under Governor Yahaya Bello places high premium on the security of lives and property, hence the security architecture in the state been strengthened for a secured environment before, during and after the programme

READ:  Chinese Factories Set On Fire After The Killing Of 38 In Myanmar's Deadliest Day Since Coup

According to him, all roads leading to the state will be manned by security agencies, while guests to the event will be piloted to different parts of the state, under tight security as all Chairmen of Local Government Areas are to collaborate using Federal security agencies, Vigilante groups and local hunters for sustained peace and security in their areas.

The subcommittee Chairman expressed appreciation to the NMMA Board of Trustees for granting Kogi state the hosting right, describing it as an opportunity to showcase the state to the world.