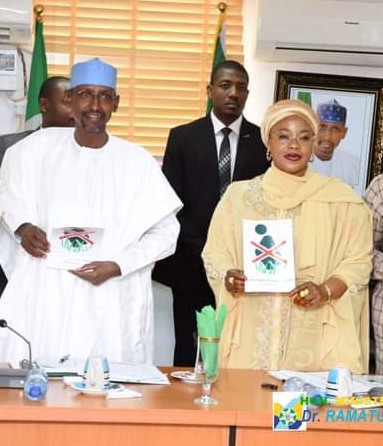 Federal Capital Territory Minister of State, Dr. Ramatu Tijjani Aliyu, has felicitated her colleague, the FCT Minister, Malam Muhammad Musa Bello, on his 62nd birthday anniversary, even as she described him as a man of calmness and candour.

The minister in her birthday wish which was made available to journalists prayed that under the stewardship of Bello, the FCT Administration would record remarkable progress, adding that the Almighty Allah would continue to imbibe him with wisdom and good health.

The message reads in part: “On behalf of my family and myself, I most heartily celebrate with you and your family on the auspicious occasion of your 62nd Birthday.

“Your calmness and candour in steering the FCT is invaluable to the successes we have achieved thus far, and it is my fervent hope and prayer that under your stewardship FCT will go to greater heights.

“May The Almighty Allah continue to imbibe in you, wisdom and good health.

The digital and global Speaker of the Nasarawa State house of assembly Rt. Hon. Ibrahim Balarabe Abdullahi has congratulate the first Executive Governor of Nasarawa State on the occasion of his 75 year birthday anniversary.

The Speaker in a statement by his Chief Press Secretary Jibrin Gwamna congratulated Senator Adamu for the successes he has recorded in life so far.

He pray God to give him more of sound health, wisdom and long life for the younger ones to continue to gain from his wealth of experience.

The statement quotes Speaker Balarabe Abdullahi has saying that the former Governor and now Senator representing Nasarawa West has impacted positively on many lives especially the growing leaders and prayed God to keep him alive in good health for the benefit of humanity.

The Speaker observed that the elder statesman who has served in different capacities as a minister, governor and senator among other notable positions no doubt has contributed greatly in the development of the state and the country at large.

Speaker Balarabe who is a political leader of Toto LG wished Senator Abdullahi Adamu more rewarding years ahead and in service to humanity.

The TODA president in a statement released and made available to Global Times Nigeria described the celebrant as a national figure, mentor and exceptional leader who have used his link to put the State on the best track of development.

Alhaji Maikaya is a Chieftain of All Progressives Congress, APC, and former Governorship aspirant on the podium of APC in Nasarawa State noting that the celebration become very important because of the personality of the political leader.

He went further to described Senator Abdullahi Adamu as a great man whose milestone remains indelible legacies despite leaving office decade ago as first Executive Governor of Nasarawa State.

While congratulating the former Governor, Alhaji Maikaya pray God to guide, protect, give him sound health, grant him more wisdom and understanding to enable him accomplished all his heart desire.

“Today being 23 July 2021 I, Muhammed Musa Maikaya joined Nasarawa State citizens to celebrate our leader and off course our former Governor and our serving Senator Alhaji Dr. Abdullahi Adamu on the occasion of his birthday anniversary.”

“Senator Abdullahi Adamu is my father, he taught me a lot in politics and as a son I deem it necessary to celebrate his special day which is his birthday anniversary. ”

READ:  My 2021 Birthday Anniversary Is A Beginning Of Good Things To Come To My Life - Says Zainab Abdullahi

In another development, Alhaji Musa Muhammed Maikaya, seasoned politician has equally congratulated muslims faithful across the globe on the occasion of Eid-el-Kabir celebration.

Maikaya is holder of a tittle Ciroman Toto made this known when he stormed his country home Toto, Toto local government area in Nasarawa State to joined him people in marking this year Eid-el-Kabir celebration says he was overwhelmed with peaceful coexistence of his people urging them to sustain the tempo.

He equally congratulated the Nasarawa Governor, Engineer Abdullahi A. Sule and pray God for success of his administration.

Global Times Nigeria report Maikaya and others leaders had yesterday met in Toto LG to discussed peace and cultural heritage of their people at an event that had in attendance representatives of the Governor, past and serving politicians within and outside the State.

He served as Special guest of honour at the Occasion where he preach peace, together, unity of purpose and need to support the government of the in order to attract more development to the area.

A statement by the Chief Medical Director of the Centre, Dr. Olatunde Alabi on behalf of the Board of management,and entire staff of the health institution wish His Excellency a happy birthday celebration and a more prosperous years ahead.

The Statement noted that the developmental strides across all sectors in the state particularly his efforts towards giving facelift to many hospitals evenly spread across the state with new modern health facilities is commendable.

According to the statement, such positive records couldn’t have been achieved without the remarkable safety and security of lives and properties for which Governor Yahaya Bello’s administration is well scored.

The statement further prayed for divine wisdom and perfect health to enable him realise his dream for the state and the nation at large.

It urged the Governor to use the new age he has attained to be more focused in his developmental agenda to consolidate on the gains already recorded to advance the course of humanity.