Kogi NYCN: Engr. Bashir Gegu, Congratulates New Leadership, Describes Their Emergence As A Round Peg In A Round Hole

The new Leadership of the National Youth Council of Nigeria (NYCN) Kogi Local Government chapter has been elected for another fresh tenure of four (4) year of a tenure.

The new Leadership would be headed by the outgoing Vice Chairman, Kogi West, NYCN, Comr. Isah Abubakar Ada Abu following his victory at the just concluded congress which held at the youth house, Lokoja, the state capital.

Presenting the new Executives to the Commissioner of Solid Mineral and Natural Resources, the outgoing coordinator and now supervisory councilor for Education and Social services, Hon. Muhammed Umar Bako, thanked the political leader for his concerted efforts towards ensuring unity of Peaceful among the people of his constituency and beyond.

He said his selfless leadership acumen, competence, capacity and love he has for the people of Kogi LG was reason the area is witnessing transformation.

He described Engr. Bashir Gegu as a leader with foresight who is always talking about development of his people and how to add value no matter what it takes.

Bako, assured the Commissioner of their unalloyed loyalty, support and solidarity to enable him accomplished all his started for his people.

Speaking on behalf of the new NYCN Leadership, the brand new Coordinator elect, Comr. Isah Abubakar Ada Abu, said he was short of words because, the commissioner has done everything for them which led to their emergence on Wednesday. He said ever since he joined the camp of the Commissioner, it was grace and upon he has been receiving which now stand him out among his peers.

According to Ada Abu, the new Leadership under his watch will never have a questionable loyalty, assuring the Commissioner that the new leadership will not tolerate failure and rather will work assiduously to exceed all expectations.

Speaking further, he said he has come to consolidate on achievement of the previous leaderships, unite the youths and work with all the relevant stakeholders in the area for optimum performance.

On his part, A Chieftain of the All Progressives Congress (APC) and who double as the Commissioner for Solid Mineral and Natural Resources in Kogi State, Hon. Engr. Abubakar Bashir Gegu has congratulated Hon. Isah Abubakar Ada Abu on his emergence as the new Coordinator of the council.

The APC Kogi LG leader, stated this when he received new Executives describing their emergence of as a round peg in a round hole.

According to Engr. Bashir Gegu “ I didn’t support you to become a rubber stamp rather to add value into what was on ground, don’t deviate from your mission

“Ada Abu is a notable fighter for freedom and advocate of the emancipation for Nigerian Youths, and he is competence, experience and hard-work.

“Comr. Ada Abu has served in several capacity and now being a coordinator is a call to service which I know he will not failed us.”

Engr. Bashir urged Ada Abu to visit all the critical stakeholders in Kogi LG including the Executive Chairman of the council, HRM. Ohimegye Koton-Karfe, Alhaji Abdulrazaq Sani-Isah koto, Barr. Muhammed Tanko Musa Osuku, Hon. Abdulkarim Bala ECOMOG and all other stakeholders to get their blessings.

“I am committed to the development of Nigerian youths, my doors is open to progressive collaboration with the NYCN leadership. This is in the best interests of the Kogi LG people. Engr. Bashir pray and wished him and his team all the best in their tenure.” 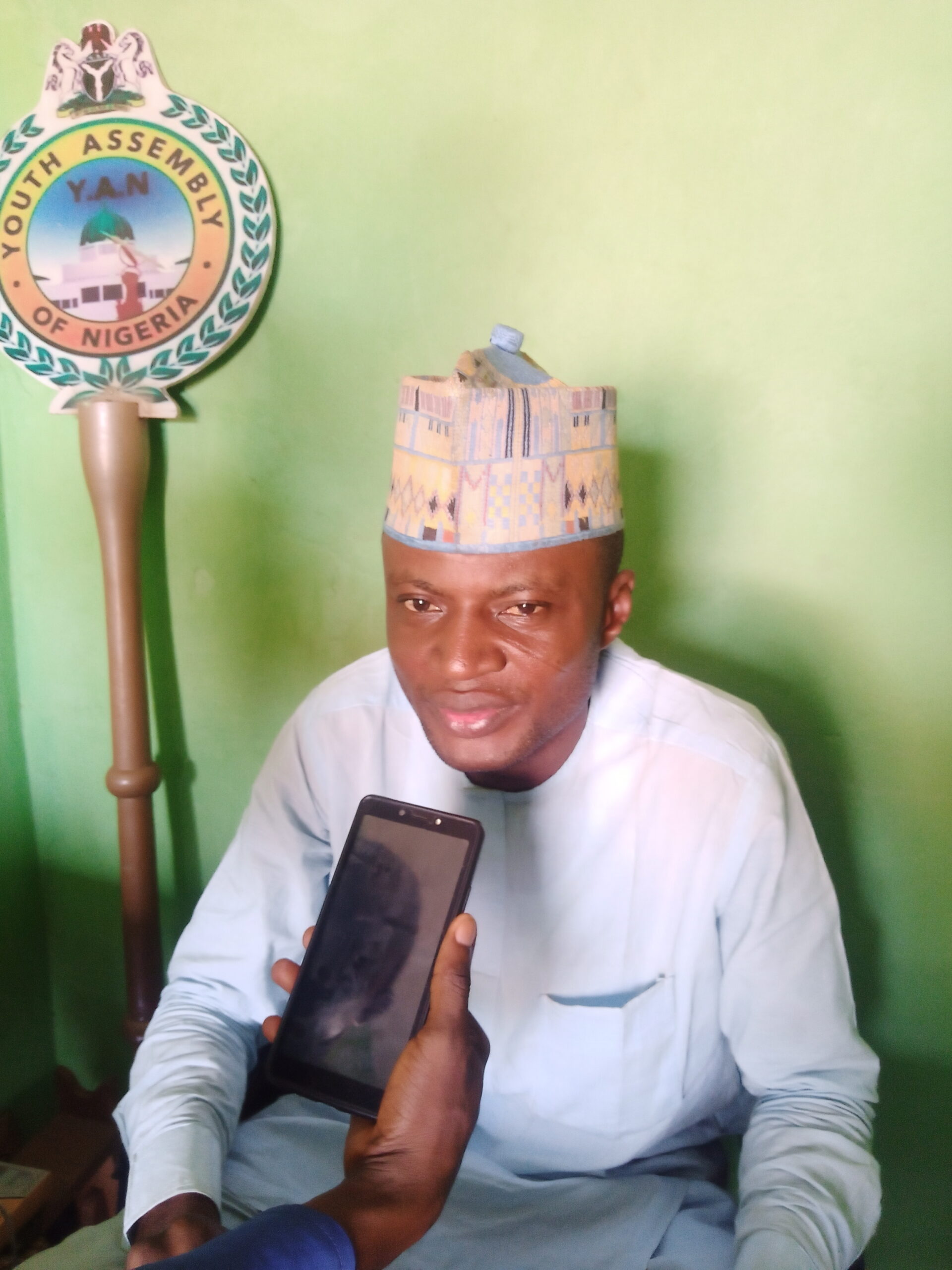 The Speaker, Youth Assembly of Nigeria YAN, Toto Local Government Chapter Nasarawa State, Rt. Hon. Yusuf Adamu Omehi has called on youths across the Country who are into the intake of hard substances to desist for their interest and the generality of the Nation.

Rt. Hon. Yusuf Omehi made the call while speaking with Globaltimesnigeria.com at YAN’s Office, Toto LG on Tuesday, 29th December, 2020.

The Speaker said youths as future leaders are expected to be image makers at their prime, pointing out that the rate at which some youths across the Country consume hard substances this days has become a concern.

Rt. Hon. Yusuf Omehi pointed out that the said future of youths started yesterday, explaining that a future not well prepared for will caught them unaware.

“Taking hard substances in the name of highness, “I want to belong, I want to use it to while away time etc is not the best thing. You are destroying your life, discouraging the younger ones that are supposed to be learning from you and you are equally destroying the society. I plead with Nigerian youths that are into this act to have a change of attitude so that we can have a serene society”.

“I have a strong belief that God almighty created all of us for a purpose, please find out the purpose of your creation and work on fulfilling it” he said.

Rt. Hon. Yusuf Omehi also charged agencies saddled with the responsibility of curbing drugs to double their efforts at carrying out their mandate, stressing that parents, traditional rulers, religious leaders, NGO’s among others all have roles to play in the quest of ensuring a drug-free society.

Federal Capital Territory Minister of State, Dr. Ramatu Tijjani Aliyu, has stated that youth inclusiveness in governance is a panacea to a better and greater Nigeria.

The minister in a statement on Wednesday, by Austine Elemue,
Special Adviser on Media stated that she made the disclosure at the FCT Youth Virtual Town Hall meeting, were she opined that the FCT Administration has designed various developmental modules for the youths and that would be unveiled in a matter of weeks.

Specifically, the minister argued that the youths should be included in large numbers especially as stakeholders where they would be assigned roles to play from the planning of any policy to its implementation, just as she tasked the youths on constructive engagements.

Aliyu also stated that the successes achieved by the FCT Administration during the palliative distribution was as a result of youth engagements, stressing that the FCT youths stood tall and entered all the nooks and cranny of the territory to distribute the palliative items equitably.

She, therefore, affirmed that any society that turns its ear or eliminates the youths from participation was destined to starve to death, adding that the economy of such society would definitely bleed to death.

In her words; “As your co-youth development personality, I have taken giant stride of ensuring that we enter into a partnership with some training bodies in the country to ensure that we engage FCT youths on sustainable entrepreneurship.

“Youth inclusiveness in governance is a panacea to a better and greater Nigeria. Youth should be included in large number in governance, but not necessarily as a political office holders, but as constant stakeholders where they would have a role to play, from the planning of the policy to its implementation. When youths are practically engaged in the processes of decision making, I know their interest will be captured from the beginning”.

While appealing to youths to be their brothers keeper, the minister noted that the Town Hall meeting was designed to achieve inclusiveness in governance among youths in the territory and beyond, adding that the forum would also give government the opportunity to build a strong cohesive environment for better learning, fruitful engagements, and a befitting society.

Participants at the Town Hall meeting commended the FCT Minister of State for providing the platform to ventilate ideas with a view to providing good governance to residents of the territory.

Issues raised by speakers include scaling up entrepreneurship among youths in the territory, environmental sanitation in rural communities, job creation, security, good road network in the area councils among others.

In its determination to contributes it quota to the society in line with cardinal principles of the council, The entire leadership of the National Youth Council of Nigeria (NYCN), ably led by it State Chairman, Comr. Idris Ojoko, on Tuesday, distributed Gas cylinders to women across the state with aimed of redeeming suffering as result of Covid-19 lockdown.

The sole beneficiaries were female youths and drawn from the 13 LGAs of the state.

It would be recalled that the Gas Cylinders was donated by the Nasarawa State government through the Commissioner for Women and Social Development, Hon Halima Ahmadu Jabiru.

The Council thanked the Nasarawa State government for this singular honor and pledged its continuous unalloyed loyalty and support to the government of Gov Abdullahi Sule.

The beneficiaries of the gestures thanked the youth council for identify with them and assured of their maximum supports, loyalty and that of the government in order to get more dividends democracy.

The youth council Chairman was accompanied by members of the State executive council.