Global Times Nigeria report that the Jigawa state Governor Muhammad Badaru Abubakar has approved the appointment of Alhaji Habibu Nuhu Kila as Special Adviser to the Governor on Media and Public Relations.

This was contained in a statement signed by the Secretary to the Government of Jigawa State, Alhaji Adamu Abdulkadir Fanini.

Similarly, the Governor has approved the appointment of Ahmad Muhammad Danyaro as Senior Special Assistant to the Governor on Print and Social Media.

Also a veteran Journalist, before his appointment, Ahmad Muhammad Danyaro was the Editor Concern Magazine, Abuja.

All the appointments takes immediate effect. 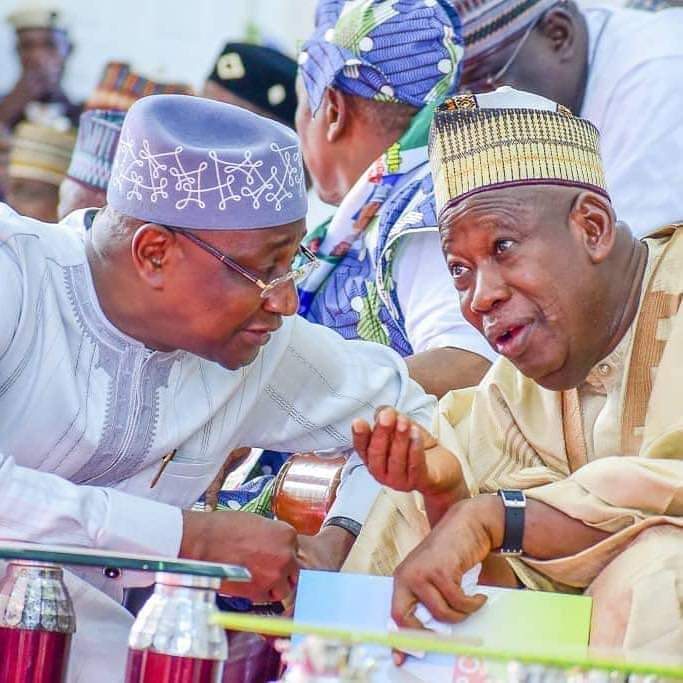 Kano State Ministry Of Information Under Muhammad Garba As Captain Of The Ship.

Kano state Ministry of Information and Internal Affairs is one of the vital ministry considering it role in managing image of the state government and mobilising the people on programmes and policies of the government. By nature the commissioner of the ministry Serve as the Chief Spokesperson and image-maker of the Government.

The ministry part of its traditional responsibility is to facilitate free flow of accurate, factual, and balanced information between the Government and the citizenry.

At the inception of the Ganduje’s administration in 2015 the Governor appointed Malam Muhammad Garba to captains the affairs of Ministry Information, Youth, Sport and Culture.

The appointment that was widely applauded as that of round peg in the round hole as a was Senior Media Practitioner and also a Former President of the Nigerian Union of Journalists, NUJ.

On assumption in office, he pledged to make the ministry staff career progression his top priority in the state civil service and has delivered on that promise the progression have really change the fortunes of staffs from ending their career either as deputy directors or on grade level 14 because the ministry have only two available directorship in ministry that is Information and Public Enlightenment.

It under his stewardship numbers of staffs in the ministry had progressed to Directorship other to Permanent Secretaries in the other ministries this is first in history of ministry and the staffs remain elated.

Another unforgettable feat his resilient toward revitalized State Owned Newspaper Company Triumph by the present administration and ensure that the paper return back to news stands after the company was unceremoniously closed down by Kwankwaso’s administration. Despite the fact the Triumph Newspaper have produce a number of prominent journalists, Presidents of Nigerian Guild of Editors (NGE) other had made their marks in the profession and thus creating waves in all aspect of human endeavour some break stints in the academia,state and federal civil service among other products of the Triumph Newspaper.

Since his appointment he provided much needed leadership in steering the affairs of the ministry and able to redefine the work ethics with an eye on the yearnings and aspirations of the work force of his ministry.

READ:  Kano State Ministry Of Information Under Muhammad Garba As Captain Of The Ship

He imaging the Ganduje’s administration policies professionally and silencing other social critics with tendencies of political view or alliance of other opposition camps.

Other feats recorded by him from 2015 to 2019 as State Government Standing Committee Chairman on Empowerment, he works assiduously toward achieving Ganduje’s administration efforts in addressing unemployment among youths and women in the state which was one of the adminstration policy since its inception in 2015.

Through his active participations in screening of youths and womens in the State Government had Empowerment no fewer than 50,000 had been empowered on various skills acquisition programmes across the 44 local government areas of the state.

These programme exposed beneficiaries to various skills such as carpentry, plumbing, other for training in various fields of automobile engineering at the Peugeot Automobile Nigeria Learning Centre in Kaduna in panel beating, car repairs and vulcanising, among others. What a great achievements worth of celebrating.

The administration proved to be most liberal and media friendly in the country because its accommodate diversity views of all in respect of political affiliation to be aired in the state own radio and private stations.

In spite some medium in the state have compromise ethic of professionalism by allowing certain peoples to abuse of privilege behind Freedom Of Expressions Guaranteed Under The Constitution.

Despite this abuse of private committed by some media organisations in the state neither Kano state government nor state ministry of information lodge complaints to NBC as we witnesses in other states government in power not allowing opposition politicians to criticize or aire their viewpoint.

The story in Kano is differents because Governor Ganduje believed that you can’t have a democratic system without engaging citizens to expresses their view because government in power is not working for itself, its working for peoples, their inputs and views are all very critical for the purpose of attaining good governance.

In fact within years in review of Information Ministry, Kano State Government set up a 14-member technical committee to sanitise operations of broadcast media in the state.

It is committee of professionals to monitor radio stations in the state in order to ensure that they adhere to broadcast code and also to sensitize ‎them. The committee would among other things, look into ‎the issue of professional misconduct and abuse of privilege by some media organisations in the state.‎ Muhammad Garba, and professor, Umar Pate, serve as co-chairman

“As a government; we are not doing this to stop people from airing their views or stop the Freedom of Information ‎(FOI), we are doing it to sanitize the sector for the overall good of the state”. He lamented

The ministry under his stewardship provided electronics appliances and other require working tools in the various Ministry’s parastatal, creation of 44 Censorship Board liaison offices in each local government areas of the state. Minimizing use of vulgar language in the street by the traditional medicine sellers.

READ:  RATTAWU Across The Nation Urged To Support The 2nd Term Ambition Of President Of The Union.

Now as commissioner for Information, state hosted 2021 Biennial Conference of the Nigerian Guild of Editors (NGE) hosted by Kano state government. This who is who in the Journalism Profession. The Conference turned out to be one of the most peaceful conventions ever staged by the Guild. The editors were taken round to some selected major infrastructural projects executed by Ganduje’s administration.

At the Biennial Conference Malam Muhammad Garba acknowledged the support and cooperation accorded to him at all time by the state governor which helped his ministry in no small measure towards realising the set goals.

Even Governor himself acknowledged Comrade loyalty and said more than thirty years of our relationship I had close closely with him as my Press Secretary and state Commissioner of Information in all these capacities proved himself as core journalist and never found him wanting any responsibilities assigned to him as does it diligently.

One thing even his critics can’t take away from him is the fact that he, harbours no ill feelings and animosity against others. Taking into considerations his antecedents and his contemporary activities, one will, without the fear of contradiction, argue that the honourable commissioner, in most instances, sees no one as enemies.

In fact, he treats all nicely, a disposition that has made him the toast of every Media Practitioners across the country, Staff of the state Ministry, peoples and politicians. Comrade Muhammad Garba commands a lot of respect within and outside of state largely due to the way he articulates his ideas and thoughts each times he speaks as peoples listen with rapt attention.

Dukawa write in from Kano and can be reach at abbahydukawa@gmail.com

RATTAWU Across The Nation Urged To Support The 2nd Term Ambition Of President Of The Union.

RATTAWU Across The Nation Urged To Support The 2nd Term Ambition Of President Of The Union.
Spread the love

RATTAWU Across The Nation Urged To Support The 2nd Term Ambition Of President Of The Union.

Members of the Radio Television Theatre and Art Workers Union of Nigeria (RATTAWU) across the country have been urged to continue to support the second term ambition of the National President of the Union Comrade Kabir Garba.

Comrade Garuba Sanni Appeals To Government At All Levels To Support Radio, Television And Art Workers Union Of Nigeria To Enable It Deliver On Its Mandate

Zonal Women Leader North Central (RATTAWU), Comrade Habibat Umar Ibrahim made the call in an interview with Newsmen in Lokoja.

Comrade Habibat Umar said a lot of achievements have been realised during the first tenure of the current National President of the Union and called for support to enable him consolidate on his achievements.

According to her, Comrade Garba has been able to carry everybody along in the Scheme of things emphasising that critical areas such as training of members, digitalization of the operation of the Union, expansion of the National Secretariat as well as promotion of gender equity are part of the achievements”.

Her words ” we in RATTAWU personally urged Comrade Doctor Kabir Garba to continue because of the numerous things he had achieved. Presently nobody has come to me to aspire for the position. It shows he is overwhelmingly supported.

The National President has and we had never had it so good. First and foremost, he is able to bring unity among members. He digitalized the operations of RATTAWU, our check up dues are remitted as at when due. He is humane an humanist personified. He will attend functions of all members without discrimination”.

The National President of the Union, Comrade Kabir Garba Sanni

Comrade Habibat Umar urged members across the country to support the National President to enable him continue his developmental agenda.

Engr. Bashir Gegu Rejoice With Abu Micheal, Publisher Of The Nigerian Post Newspaper As Recipient Of Arewa Journalists of The Year Award

Engr. Bashir Gegu Rejoice With Abu Micheal, Publisher Of The Nigerian Post Newspaper As Recipient Of Arewa Journalists of The Year Award

The Kogi State Commissioner for Solid Minerals, Engr. Bashiru Gegu, has sent a message of Congratulations to Mr. Abu O. Michael, Publisher of the Nigerianpost Newspaper for winning the 2019/2020 Arewa Journalists Award.

Engr Bashiru in statement described the AREWA TRUST NEWSPAPER PRESTIGIOUS AWARDS OF PRODUCTIVITY IN AREWA (PAPA) conferred on the Publisher as well deserved.

Recalled that Mr. Abu Micheal emerged as the Arewa Journalist of the Year at the 2019/2020 PRESTIGIOUS AWARDS OF PRODUCTIVITY IN AREWA (PAPA) held at the weekend at the Royal Tropicana Hotel, Kano.

Engr Bashir described the award as a reward for hard work and passion, said the recognition is a justification for hard work.

The Commissioner while congratulating the Publisher urged him not rest on his oars, said the feat achieved should spur him for more Laurels in the future.

While urging the Publisher to continue in his style of simplicity, humility and passion for grassroots developmental Journalism, Engr Bashir expressed optimism that the horizon looks bright for the Publisher.

He concluded by saying that the recognition is not only for the Publisher but for Kogi State, opined that it is an indication that an enabling environment has been created for Journalism practice to thrive in the State.