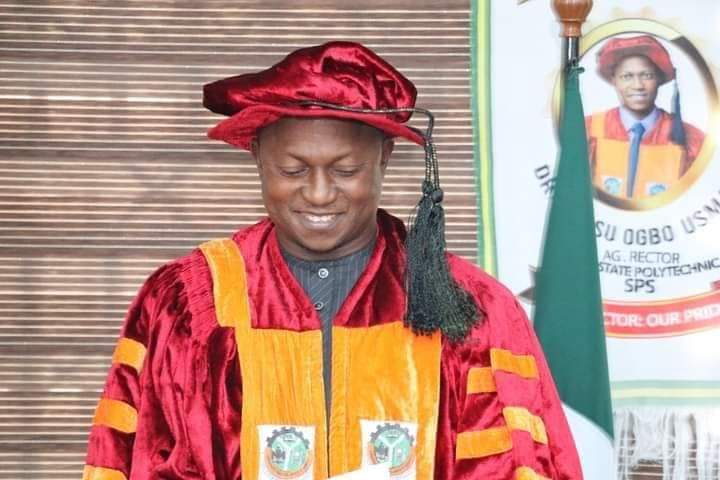 Kogi state Polytechnic, Lokoja has set up a special committee comprising academic, non academic and stakeholders within and outside the institution’s community to checkmate criminals and other bad influences.

Acting Rector of the Polytechnic, Dr Salihu Ogbo Usman disclosed on Tuesday while declaring open the 12th national conference of the school of general studies of the institution titled, “The dynamics of nation building and management of social anomie in Nigeria”.

Dr Usman explained that the institution has to take the measure in view of the lawlessness, armed robbery, kidnapping, corruption and other negative influences threatening the peaceful academic and non academic activities of the Polytechnic, which if not checked, could lead to grooming of potential liability of bad Nigerians.

READ:  Another Strike Looms As ASUU Declares Plan To Shut Down Universities

To encourage and ensure discipline on the campus, the Rector announced that his administration has rehabilitated the uncompleted hostels that were abandoned since 2007 with water supplied and reticulated .

He also disclosed that cultism has been fought to a standstill as their activities were not only banned, several members of group have been arrested and handed over to the relevant authorities for necessary actions, while others run away .

Dr Usman said the infrastructural development of the school has progressed rapidly since his assumption of office last year as more academic and administrative blocks have been built to contain and comfort students, lecturers and the administration staff, while road network in the main campus has been completed.

He observed that indiscipline, lack of sincerity, nepotism, immorality and corruption in the society and in the schools have contributed immensely to the current social malady that has crippled the nation.

” We have now found ourselves at the period of our national history, when lawlessness, irredentist agitations, unemployment, armed robbery, kidnapping, corruption etc are threatening the corporate existence of the country, as Nigerians make life more unbearable for fellow Nigerians,” the Rector lamented.

Dr Usman therefore commended the organisers of this year’s conference for choosing the theme ,The Dynamics of Nation Building and Management of Social Anomie, as it is not only timely, but germane to help in the search for solutions, either human, material and divine to the myriad of problems confronting the nation.

He noted with serious concern about the survival prospect of the nation as some persons he described as diehard pessimists are beginning to waver with various sources and people suggesting restructuring, devolution of power, resource control, secession or outright disintegration of the country.

Present to watch the students in action were parents and friends of the institution. The competition also gave parents and invited guests the opportunity to see how their children’s are doing well academically.

Mrs Sarah Ayuba seated with other invited guests during the sport event at Koton-Karfe, Kogi LG

Speaking at the occasion, the President Police Officer’s Wives Association (POWA), Mrs Alkali Baba Usman, who expressed total gratitude to God to be present at the auspicious occasion of the maiden sports festival of the police children school Koton-Karfe.

The POWA President who was ably represented by wife of Kogi State Commissioner of Police, Mrs Sarah Ayuba, described sports as a very essential to every human life, noting that it keeps their body fit, fine and enhances physical strength.

Her statements read in part: “Sport develop the the physical as well as the mental strength in students, daily exercise is essential to students because it does not help students to stay healthy alone, but also helps to improve their emotion.”

Mrs Sara Ayuba, who is also the Special guest of honour at the Occasion consider her present honour and privilege to represent the POWA President to perform this pleasant duty.

Mrs Ayuba emphasize the need for sports to be adopted as a major part of the school curriculum because if students stay emotionally and physically healthy, they can easily focus on their studies. She stressed the need for all students to participate actively in sport activities in order to increase their confidence, mental alertness and self esteem.

She commended the head teacher and staff of police children school Koton-Karfe, Kogi local government for the initiative to organize this event and the zeal to ensure the event becomes a reality.

The event features different category of sports competition which are as follow:

The winners were presented with prizes, gifts and cash worth thousands of naira.

Barr. Tanko who was overwhelmed with the school success recorded in shortest time of its establishment.

Barr. Tanko who is also a legal luminary commended the teachers for making the day a success, while thanking the patents for their support and sponsorship.

The State Civil Service Boss reiterated the need for early nurturing of children’s talents, saying, “It is good we catch them young.”

He thanked the Kofi State Governor, Yahaya Adoza Bello for promoting sports in the state, especially for making sports compulsory for all schools in the state.

Barr. Tanko presenting gift items to one of the winner of the sport festival

He added: “Inter-house sport is also educative on its own. If you are not fit physically you cannot be sound mentally and a sound mind can only lie in sound body.”

He urged the winners not to rest on their oars, just as he encouraged the losers to strive harder for success.

Also speaking at the end of the competition, the School PTA Chairman, Alhaji Abdullahi Yusuf Ohikwura, Mawatale of Igu Koton-Karfe kingdom and Treasurer Kogi LG said he was pleased with the performance of various houses, and urged the students to always strive to be the best they can.

Ohikwura thanked the Almighty Allah and authority for finding their community worthy for siting the school.

“What happened here is that, I saw level of commitment in their education pursuit, I have no doubt that the school will produced future leaders”. Ohikwura noted.

On his part, Commissioner for solid Minerals and natural resources, Engineer Abubakar Bashir Gegu who was ably represented by his Aide, Comr. Abubakar Usman commended the school management for the great job, assured of his support.

The event had in attendance, wife of State Commissioner of police, representatives of traditional institution, politicians and stakeholders within and outside Koton-Karfe.

Chairman of Abaji Area Council, Hon Abdulrahman Ajiya (m) shortly after he met with members of the scholarship committee on Tuesday.
Spread the love

The Chairman of Abaji Area Council, Alhaji Abdulrahman Ajiya, has disclosed that a sum of N13.6 million has been released for scholarship disbursement to indigent students of the council learning at various tertiary institutions across the country.

Ajiya, while speaking with newsmen shortly after he received a briefing from the chairman of the scholarship committee, Abdullahi Abubakar, said 1,365 students which he said cut across national diploma, NCE and university benefited from the scholarship scheme.

The chairman, however, said the councils desire to disburse the scholarship was aimed at supporting the indigent students to go school and acquire education.

He said since he assumed right from his first tenure, euducation has been his administration top priority, which he said the council has also been making effort to support the girl – child education.

“And it was one the reason immediately when I assumed office, I decided to established government day secondary school in Abaji town, where parents including those from neighboring Kogi and Nasarawa state send their children to the school,” he said.

Chairman of Abaji Area Council, Hon Abdulrahman Ajiya (m) shortly after he met with members of the scholarship committee on Tuesday.

The Chairman, further lauded the head of department and supervisor for education and other members of the committee for their transparent way in ensuring the ongoing disbursement was peaceful and transparent without any complaints from the affected students.