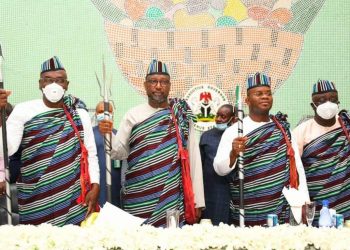 Kogi state governor, Alhaji Yahaya Bello, has lamented that the non review of the revenue allocation formula has increased the burden of states and local government councils in the country.

In his remark at opening ceremony of zonal public hearing on the review of current revenue allocation formula, organised by Revenue Mobilisation Allocation and Fiscal Commission, held in Government House, Lokoja, explained that this is the time to remove the extra, back breaking burden which states bear in catering for over bloated workforces particularly at third tier level which can not be retrenched without creating worse security, economic or political problem.

Governor Bello, who was represented by his Deputy, Edward Onoja, lamented that the federal government had entered into all sorts of agreement with organised labour, including minimum wage as well as enhanced professional careers, which invariably mean more money out of the already depleted allocation.

While advocating for a total review of the vertical revenue allocation formula, the Governor urged the federal government to consider relinquishing portion of its share to states and local governments.

Stakeholders and participants from the six states of the North Central zone, unanimously appealed to the federal government to review the allocation formula in the interest of peace, justice and good governance.

In the various papers presented at the public hearing, the Kogi State government, represented by the Commissioner of Finance, Mukadam Asiwaju Idris, had suggested that the revenue allocation should be reviewed as follows Federal government 40 % State 39% and 26% for the local government.

The Kwara State Commissioner for Finance Mrs. Florence Olabisi Oyeyemi who participated through virtual arrangement suggested that 33 per cent should go to the Federal government while state and local should have 30 and 25 percent respectively.

The representative of Plateau state
posited that federal government should hold on to 40 percent and States and local governments will share 35 and 25 percent each.

The Chairman of Revenue Mobilization Allocation and Fiscal Commission, Mr. Elias N. Nbam in his welcome address pointed out that the presence of critical stakeholders will further encourage the commission in its commitment to produce a new, fair, just and acceptable revenue allocation formula.

“Your contributions will certainly enrich the process and assist the Commission in coming up with a formula that will be acceptable to majority of Nigerians. As you may all be aware, the Revenue Mobilisation Allocation and Fiscal Commission (RMAFC) by virtue of Paragraph 32(b), Part 1 of the Third Schedule to the 1999 Constitution of the Federal Republic of Nigeria (As Amended), is empowered “to review from time to time the Revenue Allocation Formulae and principles in operation to ensure conformity with changing realities, provided that any Revenue Formula which had been accepted by an Act of the National Assembly shall remain in force for a period of not less than five years from the date of commencement of the Act”’, he stress.

READ:  COVID-19: Why Nasarawa Must Support Engineer Sule To Fish Out Scourge