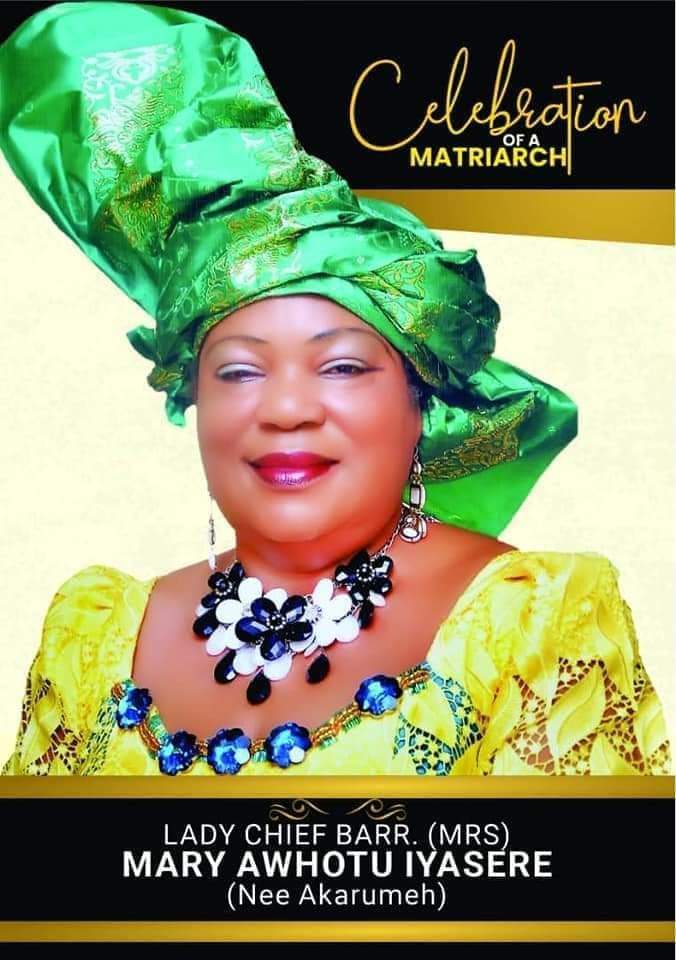 The funeral mass and reception in honour of departed former Commissioner for Commerce and Industry, and Special Adviser to Governor of Delta State on Entrepreneurship Development, Chief Mrs Mary Awhotu-Iyasere Esq, will hold on Friday 22nd October, 2021 at her native home town of Orhoakpo, Ethiope East Local Government Area of the State.

A Statement on behalf of the family by Chief Avwurhi Akarumeh and Mr Tega Iyasere, gave details of the scheduled programme for FRIDAY 22ND OCTOBER, 2021, as follows;

Chief Mrs Mary Iyasere Esq, slept in the Lord on 23rd September, 2021 at the age of 68 years, after a brief illness. She will be greatly missed.

May her gentle and kind soul rest in perfect peace, Amen! 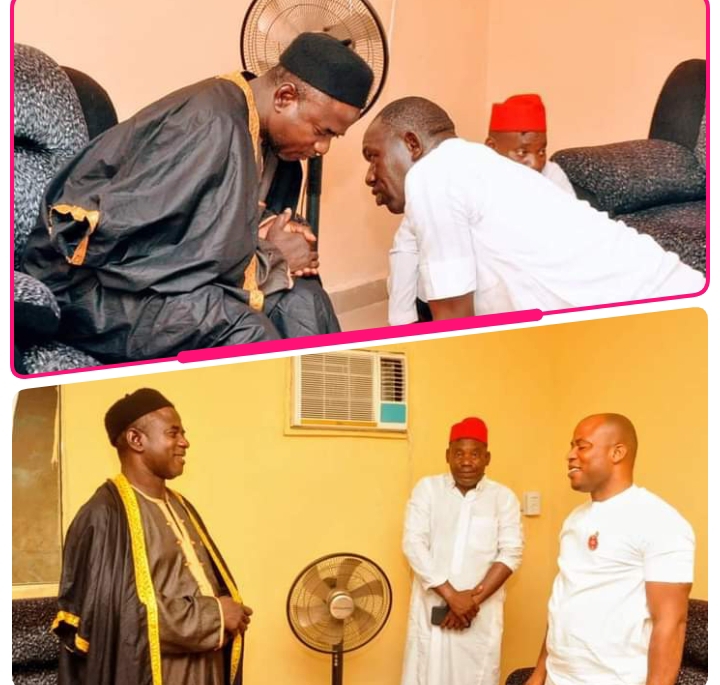 Kogi State Governor, Alhaji Yahaya Bello on Saturday, expressed his deep condolences to the people of Girinya, Kogi local government following the passing of a Queen in the area.

The Governor who was represented by a top government functionary led other leaders to Girinya, Kogi local government area of the State on a condolence visit to His Royal Highness. Alhaji Momoh Muhammad Ganaguda, first class and ruler of Girinya who’s wife Mallama Maryam passed away recently as a result of brief illness.

Engineer Mohammed Abubakar Bashir Gegu, the State Commissioner for Solid minerals and natural resources, who represented the Governor in a condolence message delivered to HRH Alhaji Momoh Ganaguda said its very painful to lose a loved one at this trial time considering the impacts and roles the deceased must have brought to bear not only to the royal family but entire Kingdom.

The Governor while consoling the people of Girinya and entire Kogi LG urging them to take solace in the fact that the Queen lived a good life while a life. He prayed God to forgive her shortcoming, reward her soul with Aljanah Firdau and as well grant the family the fortitude to bear the irreparable loss.

READ:  Sani Oseze Condoles Toto People Over Demise Of A A Gentleman, Describes Him As A Pacesetter.

Responding, HRH, Alhaji Momoh Muhammad Ganaguda, first class and paramount ruler of Girinya appreciated state government delegation and the Governor for coming down to identify with over the sad occurrence that befall the royal family.

The King noting that Alhaji Yahaya Bello has proven that he is indeed a son of the soil with his usual support and uncommon passion he has for the people of the area.

He assured the Governor of his domain loyalty and support and prayed for success of his administration.

In another development, Youths at all levels has been urged to remain focus, law abiding and supportive of the present administration led by All Progressives Congress, APC, in Kogi State and under the able leadership of His Excellency, Alhaji Yahaya Bello, Executive Governor of Kogi State in order to continued to benefits from its ongoing programme and dividends specially designed for the youths in the area.

The State Commissioner for Solid minerals and natural resources, Engineer Mohammed Abubakar Bashir Gegu gave the assurance when he met some youth groups in Kogi LG on Saturday, during his visit to the area.

Engineer Abubakar Bashir Gegu who was in the area on condolence visit while buttress his point said youths have been part of decisions making in Kogi State and through their leader Alhaji Yahaya Bello, Executive Governor of Kogi State since he came onboard and who have provided them with a platform and enabling environment to thrive, saying the youths make the right decision by voting for the Governor massively in second term 2019 elections.

The Commissioner said the primary responsibilities of any government should provide basic welfare, health system, education, infrastructure and security for young people because they are the future of the country.

He said the incoming administration at the central level and the one who will succeed should be able to sustain the various youth empowerment programmes such as the N-Power, Anchor Borrowers and school feeding hence the need to support the candidature of Alhaji Yahaya Bello as Nigerian President.

Engineer Bashir Gegu who appreciate the conduct of the all the various youth groups in Kogi State particularly those of Lokoja/Kotonkarfe federal constituency and urged them to remain law abiding calling all Nigerian youths to go out and canvass for Governor Yahaya Bello without rancou. he said.

He also used the medium to dispel rumored making the round that there were some traditional rulers in the state that will soon dethrone. The Commissioner who expressed deep concerned over such rumored being peddle by some unknown faces whose mission was to set the State on fire, urged the peddlers to desist. He said.

May God Have Mercy on her soul, Nasarawa Speaker condoled Amb. Henry Omaku over loss of Mother 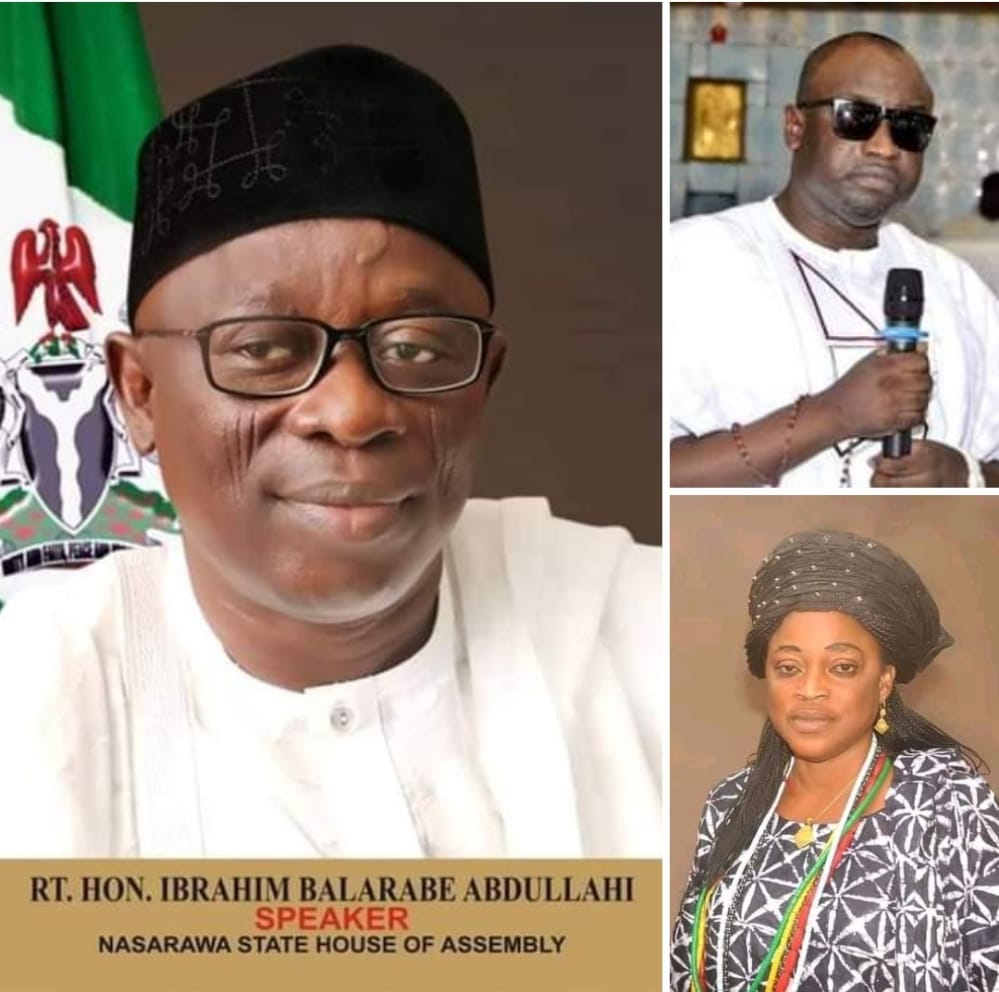 May God Have Mercy on her soul, Nasarawa Speaker condoled Amb. Henry Omaku over loss of Mother
Spread the love
more

A statement by Press Secretary to the Speaker Jibrin Gwamna said Balarabe Abdullahi, sympathized with Ambassador Henry John Omaku and the entire family over the exit of their mother praying God to forgive her shortcomings.

Speaker Balarabe Abdullahi, who represent Umaish/Ugya constituency enjoined the family to see her passing on as an act of God, and continued to pray for the repose of her soul noting that late Mama Evelyn John Omaku has lived a fulfilled life.

Global Time Nigeria report also report that late Mama Evelyn, mother of Ambassador Henry John Omaku, Nigeria’s High Commissioner to the Republic of Sierra-Leone died at the age of 65 after a protracted illness and has been buried in Doma yesterday Friday 12th November, 2021.

The Federal Capital Territory (FCT) wing of the Nigeria Union of Teachers (NUT) on Tuesday, condoled Senator Philip Aduda representing the territory over the demised of his father, Rt Reverend Tanimu Samari Aduda.

Commisioner for public complaints commission, Mr Ezikel Dalhatu Musa, after the condolence of the executive of NUT to family of Senator Aduda

Chairman of NUT in the FCT, Comrade Stephen Knabayi, accompanied by the acting secretary of the union, Comrade Magreth I. Jethro, alongside some other executives during their condolence visit to the family residence of Senator Aduda, in Karu, Abuja, said the entire members of the union were bereaved over the demised of the Clergy.

He added that the union received the news of the Senator Aduda’s father with great shock, even as he described the late clergy as a man of God who lived his life in the service of God and mankind.

He urged Aduda’s family to understand the dealing of God in the life of the late clergy, since he was created by God for an assignment of a period of time where the deceased completed the assignment and was later called by God.

Chairman of NUT in the FCT, Comrade Stephen Knabayi

He further said that late clergy died as a christian and man of God, saying the legacies left behind by him will never be forgotten.

The NUT chairman, further appreciated the Senator Aduda, and entire family members, saying Baba was a good man like Senator Aduda, which he said is known to be doing good to the people of the FCT.

READ:  Wadada Says The News Of The Death Of A. A Musa (Gentleman) Came To Him As A Shock Being His Father's Associate, Urges Toto People To Emulate His Humility.

“His service to God and humanity too cannot be forgotten. We just want him to use this opportunity to look on to God, who will fill the gap that has been created by the departure of Baba,” he added.

He, therefore, prayed for the soul of the late clergy to rest in peace and also prayed for God to give entire Aduda’s family to bear the irreparable lost.

The chairman of NUT in the FCT, Comrade Stephen Knabayi, speaks with newsmen during his condolence visit to Senator Philip Aduda over demised of his father