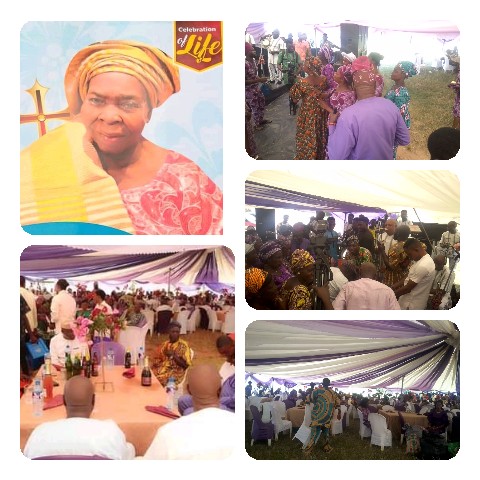 It was a great gathering of family members, friends, politicians, traditional rulers, well wishers from both far and near, as they all converged at Odo-Ere in Yagba West Local Government Area of Kogi State to witness the final burial ceremony of Late Pastor Mrs. Elizabeth Olorunshola Oluwakope.

Born in 1928 and died on 13th September 2021, Late Pastor Mrs. Elizabeth Olorunshola Oluwakope, was a Prophetess who touched many lives in the society during her lifetime.

The Bajana of Obajana, Engr. Idowu Isenibi, while speaking about the personality of Late Pastor Mrs. Olorunshola, described her as a woman of good character.

Engr. Isenibi who was represented at the event by the Otumba of Obajana Kingdom, Otumba Victor Atte, enjoined parents to borrow a leaf from the child upbringing commitment of Late Mama to enable their children/wards impact the society positively.

“When you look around and see the cream of people that attended Mama’s burial, you will know that it’s not a coincidence

“Late Pastor Mrs. Elizabeth Olorunshola has left a good legacy, she was a mentor to many, a true mother figure, a devoted christian and a role model to many

A Former Speaker of the Kogi State House of Assembly, Chief Emmanuel Simoyan, in a remark recalled his encounter with Late Pastor Mrs. Olorunshola, saying she was a God fearing mother.

“I have met Mama in several occasions for prayers and after Mama prays with you, she will never demand for anything from you

“If Mama ask you to fast, she won’t leave you to fast alone, she will fast along with you irrespective of the number of days

A daughter of the deceased, Mrs. Asaje, while speaking on behalf of the children, described their late mother as a woman with a heart of gold, a caring mother and a disciplinarian who will be greatly missed for her wise counsels.

Mrs. Asaje appreciated everyone that attended the final burial ceremony, and prayed God to grant them long life and prosperity.

On his part, a Son In-law of the deceased, Chief Richard Asaje, said Late Pastor Mrs. Elizabeth Olorunshola Oluwakope will be remembered for the great impact she has made in the lives many before her departure.

In Chief Asaje’s words “Late Pastor Mrs. Elizabeth was my mother in-law, a mother in-law like a mother, a devoted christian, somebody that has nurtured me and made me an outstanding person that I am today, she was a mother in-law per excellent

“She never took me as an in-law, she took me as her biological son, we were so close and I always feel at home once I am with her”

Chief Asaje appreciated friends, politicians, opinion moulders, traditional rulers amongst others who travelled from both far and near to grace the event and prayed God to continue to strengthen their relationship the more.

A Former Deputy Governorship Candidate in the State, Hon. Tajudeen Bako Ibrahim, described late Mrs. Elizabeth Olorunshola as a mother to all, calling on other parents to take the training of their children more serious.

Similarly, a Clergyman from the Area, Pastor Kingsley Ikusegba, pointed out that the deceased was a woman of proven integrity, a devotee, and a charitable woman who has affected the lives of orphans, needy and others for good.

A grandson of the deceased, Dr. Samson Dayo Asaje, expressed happiness over the life well spent of his late grandmother and prayed God to grant her eternal rest.

Others in their remarks, lauded the good legacies of Late Pastor Mrs. Elizabeth Olorunshola Oluwakope, describing her as a woman with a rare caring heart and also prayed God to reward her children for the good works she has done while alive.

The burial ceremony featured Wake Keep, Interment and Reception where the audience were entertained with good music and various dances.