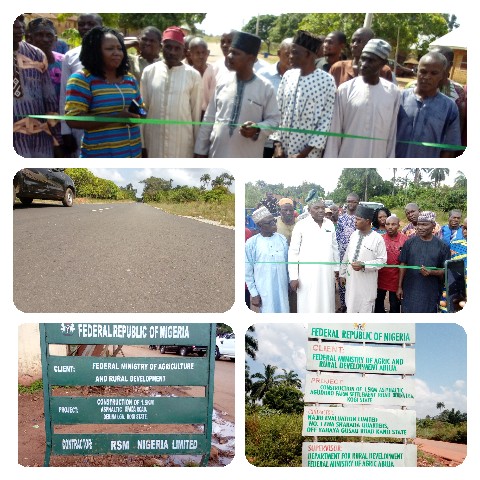 As part of efforts to ease the challenge of transporting farm produce from the farm to the market, the Federal Ministry of Agriculture and Rural Development has commissioned two road projects it constructed in Dekina Local Government Area of Kogi State.

The Minister of Agriculture and Rural Development, Dr. Mohammed Abubakar, while commissioning the projects said access roads was essential in the Agricultural sector, saying so many farm produce have perished in the past as a result of poor road network.

Dr. Abubakar, who was represented at the Commissioning ceremony by the State Director, Federal Ministry Agriculture and Rural Development – Kogi State, Mr. Shekamang Ayuba, explained that the President Muhammadu Buhari led administration of the Federal Republic of Nigeria has accorded attention to the agricultural sector hence the need to embark on road projects to enable farmers transport their goods safely.

The Minister congratulated the benefiting Communities over the completed that have been handed over to them and charged them to take ownership of the projects.

He said the call became necessary as damages to the projects has direct effect on them, saying good maintenance will attract more projects to them.

Dr. Abubakar assured of his commitment to continue to live up to expectations in discharge of his commitment, calling on youths in the Area to embrace the agricultural revolution in the Country.

The people in the benefiting Communities, who could not hold hold back their joy, heaves praises on the Minister of Agriculture and Rural Development, Dr. Mohammed Abubakar.

Mr. Yahaya Ahiaba, while speaking on behalf of the people in Abocho Town and Ofobo Village, appreciated the Federal Government through the Federal Ministry Agriculture and Rural Development for remembering the people of the Community in their of scheme of things.

Mr. Ahiaba described the project as a great honor done to the Community, stressing that it has in no small measure help alleviate the transportation challenge usually encountered in the Area.

The Community representative, just like Oliver Twist however lists Water, electricity and more road construction as other challenges facing Communities in the Area, calling the Federal and State Government for more assistance.

The Ogohi Onu Ayingba, HRH Abu Shaibu Okolo, While commenting on the Agudoko farm settlement road,
described the project as answer to prayers, saying the people of the Area have been yearning for the construction of the road.

The Ogohi Onu Ayingba who was represented by HRH Chief Wada Oyibo, said the project has brought succor to the plight of farmers and increased the socio economic lives of the people of the Area.

He appreciated the Federal Government through the Federal Ministry Agriculture and Rural Development for the gesture and also calls for more of such gesture to the people of the Community.

Other projects commissioned include a Solar powered Borehole at Karara in Kogi LGA and a Motorized Borehole at Shagari village in Adavi LGA of the State.

READ:  Insecurity: Be Wary Of Visitors You Host In Your Homes - Zuba Monarch Tells Residents.

READ:  Insecurity: Be Wary Of Visitors You Host In Your Homes - Zuba Monarch Tells Residents.