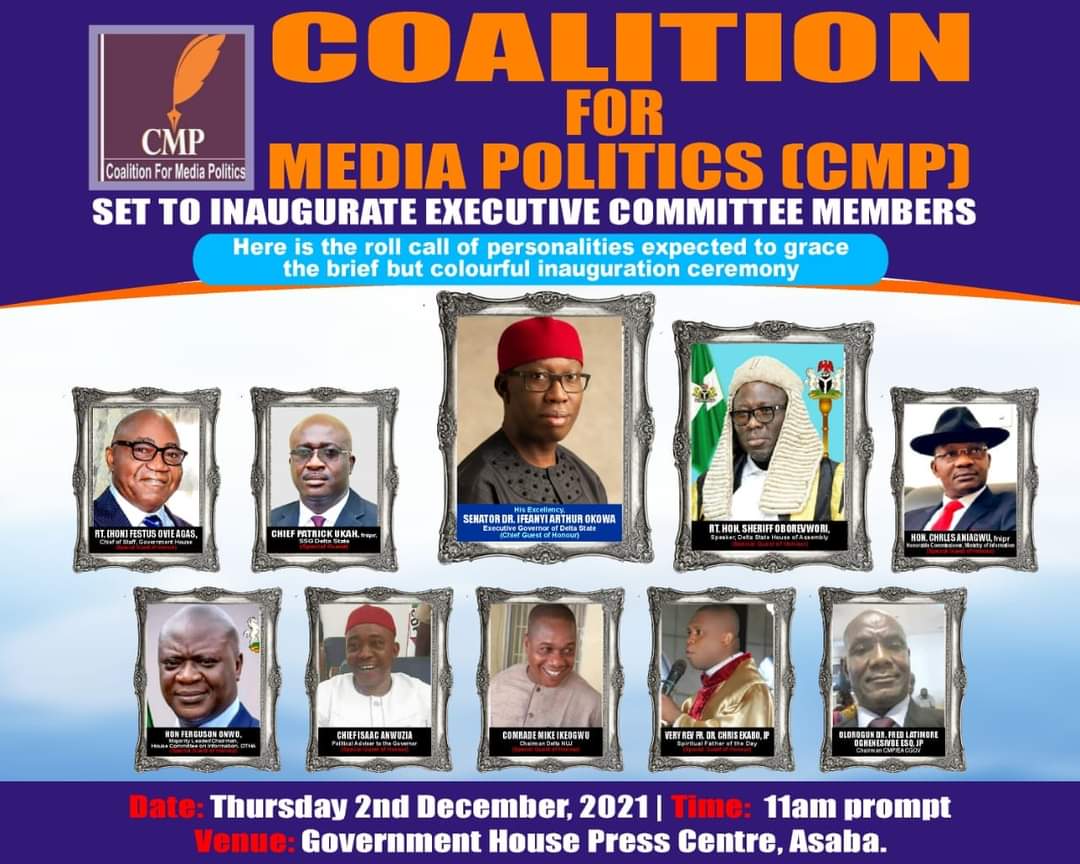 Coalition for Media Politics, CMP, has again re-echoed her strong determination to consistently project the laudable and numerous achievements of the Okowa administration from 2015 and still counting.

The group gave the assurance at a meeting held in Asaba, to put finishing touchés to arrangements for the inauguration of CMP Executive Committee Members, slated for Thursday 2nd December, 2021 at Government House Press Centre, beginning from 11am.

CMP in a statement issued by its State Chairman, Chief Dr Fred Latimore Oghenesivbe Esq, advised 2023 governorship aspirants in the state to go about their political consultations and market their mission statements, and to avoid propaganda, misinformation, character assassination and blame game.

It stated that constructive criticism is universally recognised as an integral part of democratic politics and representative government; wherein opposition political parties and citizens points out actions and inactions of leaders and governments, so as to expand the scope and benefits of dividend of democracy at the state or federal levels.

“CMP shall at all times join political issues with any 2023 governorship aspirant desirous of deploying propaganda, character assassination and blame game as electioneering campaign strategy to win either party primaries or governorship elections in the state. We resolved to checkmate such anti democratic moves and tendencies.

“Constructive criticism is credible globally in democratic governance and if Okowa administration must be criticized, it should essentially be based on facts which a reasonable man can attest to, not misinformation and naked lies,” CMP said.

CMP also disclosed that the inauguration of Executive Committee Members of the group will hold on Thursday 2nd December, and that Governor Okowa or his able representative is expected to preside at the ceremony while the multiple award winning Honourable Speaker of Delta State House of Assembly, Rt Hon Chief Sheriff Oborevwori, JP, shall be in attendance as Special Guest of Honour. 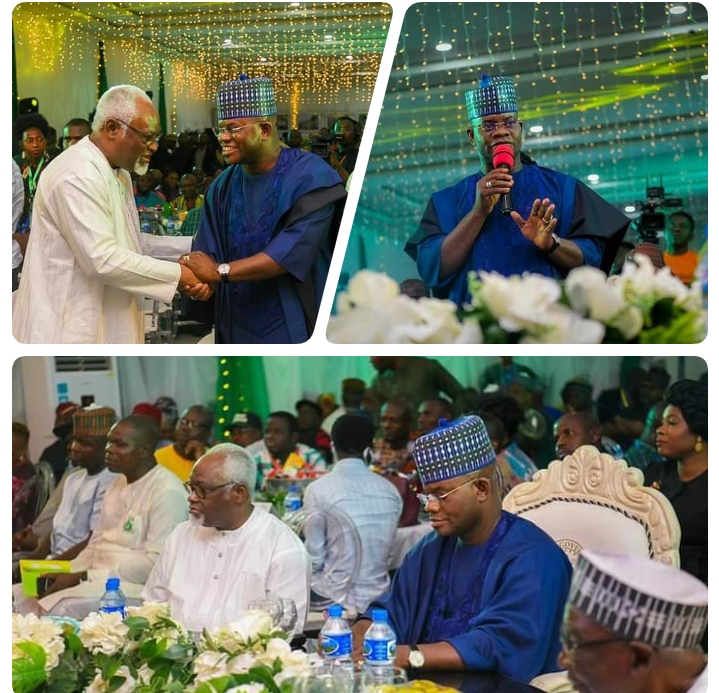 Kogi State Governor Alhaji Yahaya Bello has described the fourth estate of the realm as more powerful than the combined powers of the arms of government, if a truly free environment is allowed for a vibrant press.

Governor Bello expressed his feeling while delivering his welcome address at the opening session of the Nigerian Media Merit Awards (NMMA) 2021 holding in Lokoja, Kogi State.

While reminding Journalism practitioners of their enviable position as the conscience of the society, the Governor therefore described the media as the ” big heart ” at the Centre of the Nation.

While acknowledging the importance of the three arms of Government, however noted that the ‘fourth estate’ is equally powerful, in view of the fact that modern society cannot do without journalists.

He said the world would be a scary and dark place without the Journalism profession, pointing out that aside dispelling falsehood, eliminating dangerous assumptions, they provide societies with the basic premises upon which governance and other decisions can be made.

READ:  RATTAWU Across The Nation Urged To Support The 2nd Term Ambition Of President Of The Union.

The governor disclosed that while journalist help to bring order to society and engender human cooperation, but however lamented that lives and whole societies have been ruined by the irresponsible practice of journalism by media practitioners, or quacks who impersonate them.

“The problem is so endemic that in Q3 2020 alone, statistics show there were 1.8 billion engagements with fake news on Facebook alone! Nigeria, like many countries, has fallen victim to it many times, sometimes with devastating loss of lives or properties.

” The Press is therefore one of the inescapable hallmarks of modern society and in particular, the custodian of public perception. What a divine responsibility”.

The Governor called on the Media to regulate itself with the help of the Law to avoid malfunction, insisting that Practitioners must recognise that due to the incredible powers which society has entrusted to them, there is a corresponding demand for responsibility, ethics and professionalism in the exercise of those powers by journalists.

The Governor called on journalists to strive hard to take back their profession from the quacks and the hacks, specifically the myriad of unregulated persons armed with Internet-enabled devices who haunt the media space, especially on social media must be curtailed.

The Governor described the Nigerian Media Merit Awards (NMMA) Trust as perhaps one of the most important institutions which could exist right now, said by rewarding merit in the way individuals and media houses practice journalism, the NMMAs provide critical motivation for the real journalists to do their work professionally.

He noted that by so doing the NMMA would help promote sanity in the industry and simultaneously function as an accountability partner for most professional journalists.

Media professionals in the country have been advised to imbibe the spirit of professionalism while discharging their official duties in a manner that would promote peace, unity and national cohesion.

Hajiya Dr. Ramatu Tijani Aliyu,
Federal Capital Territory Minister of State made the observation at a program organized to commission Abuja Municipal Area Council (AMAC) Community Radio and charge the operators to imbibe the ethical standards of the journalism profession.

A press statement signed and issued by SA Media to FCT Minister of State, Austine Elemue quoted the Minister as urging the operators to used the facility to better the lot of society.

The Minister further called on the operators to ensure that the station serve as a platform that would facilitate an interface between duty bearers and rights holders.

READ:  EndSARS: My Son Was Harassed By Security Operative Due To Stature – Osun Information Commissioner

While describing Community Radio as a medium of expressing and sharing views, thoughts, ideas, problems and prospects of rural, disadvantaged, vulnerable and hard-to-reach populations, she however, warned operators to be weary of individuals and groups with interests and dispositions to cause public disquiet and disrupt the peace of the society

“We are therefore confident that this Community Radio can help us in addressing social, economic, cultural, educational, health, water and sanitation and disaster-related issues more effectively and strategically.

“The station should also promote small and medium enterprises development by creating market opportunities for the operators and consequently improve their sales and incomes, and contribute to the socio-economic development of the people.

“It is important that we must avoid misadventures into politics and religion and any sensitive issues that have the potential to divide rather than unite our people. These and many more are daunting tasks before you, and you must do everything to avoid such landmines”, the minister cautioned .

Aliyu, however, commended the Chairman of Abuja Municipal Area Council for the diligence exhibited in the service of the people, stressing that the Community Radio would further enhance revenue generation of the council.

Speaking earlier, chairman of Abuja Municipal Area Council, Hon. Abdullali Adamu Candido, said that the aspiration of his government since 2016 was to change the narrative, establish the concept of self-sustaining council with economic strength.

He added that the vision was developed to a conceptual framework which transformed to the establishment of some institutions such as AMAC Investment and Property Development Company, AMAC Micro finance bank, AMAC Marshals and the AMAC Community Radio, stressing that their operations are being monitored to ensure their sustainability.

Candido, affirmed that the AMAC Community Radio was established in order to bridge the information gap and to further bring governance closer to the people, while charging residents of  Karshi community to safeguard the project.

The AMAC boss called on development partners whose goals and programmes span across community mobilization and socialization towards stimulating and sustaining the process of growth and development of rural communities, to see AMAC Community Radio as a veritable tool to propagate their goals.

The highpoint of the event was the unveiling of the AMAC Community Radio and Karshi Community Plaza which was named after the FCT Minister of State, Dr. Ramatu Tijjani Aliyu.

In a bid to broaden the knowledge of practicing Journalists on modern technology, the Management of the Folio communications, in collaboration with the Africa’s industrial giant, the Dangote Industries, have invited over 50 Journalists across the North Central geo-political zone for training.

The workshop which commenced Wednesday at the cement village, Obajana, in Kogi state with the theme ” The convergence Journalism “, will lasted three days brainstorming on critical Media practice.

Head of Special project of the Folio Communication, Mr Pius Alabi, while welcoming the participants to the workshop, assured that the resource persons are very versatile in the areas they have chosen to discuss and therefore advised them not be listeners only, but contribute positively and effectively for the overall achievement of the objective of the exercise.

He explained that the 3 day programme will centre on convergence journalism, the emergence of the Dangote cement company, it’s development, achievements and future plans. Others include social media journalism, Public Relations and Advertising.

Alabi thanked the Management of the Dangote Industries and that of the Obajana cement company for their reception, promising that Journalists will use their good offices to allow the whole world know about their activities.

The first paper with the theme Convergence Journalism was delivered by one of the longest serving editors in the Nigerian newspaper industry, Abdulkareem Baba Aminu.

He was the Saturday editor of one of the most influential newspapers in Nigeria, the Daily Trust, for 12 years after practicing for 2 decades. He is also a trainer of some varieties of sub sectors of Journalism.

He described convergence journalism as bringing together some varieties of the media based on either ownership, tactical or structural in information gathering and story telling through the television, radio,newspaper and social media.

Baba Aminu, who described the emergence of the convergence Journalism as revolutionary and an evolution that transforms communication through the media as more than one means that can be utilized to achieve more goals.

He however said though there are more gains in the idea of the convergence Journalism, there could be challenges especially if room is given for competition by being lazy , urging practitioners to keep up to update to sustain leadership.

Other challenges associated with the convergence Journalism, the renowned Editor said, include collusion with non Media fields like banks and other cyber crimes and persons using such platforms to denigrate citizens.

The media guru therefore advised practitioners to upgrade their skills on convergence media by being innovative and to chose areas of attraction to their followers and participants.