2023: Okowa’s Achievements will facilitate Election Victories for PDP in Delta. 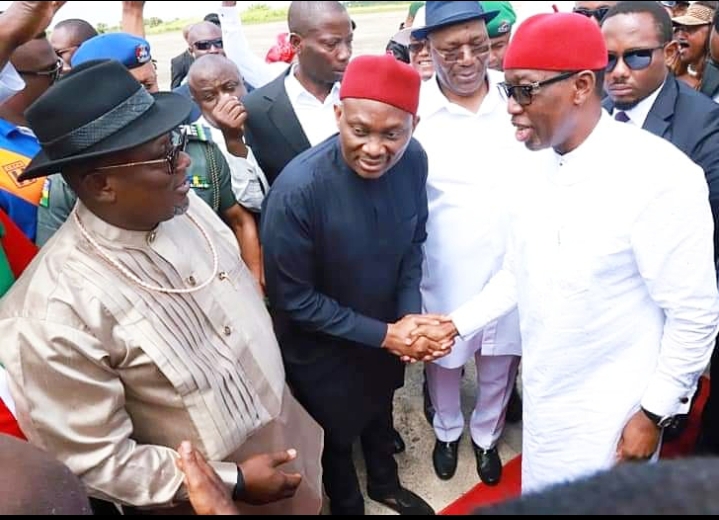 Executive Assistant to Delta State Governor on Communications, Dr. Fred Latimore Oghenesivbe Esq, has said that the governorship candidate of the People’s Democratic Party, PDP, Rt. Hon. Sheriff Francis Oborevwori will effortlessly overrun other candidates of opposition parties with a wide margin in 2023, for obvious reasons.

He gave the assurance while responding to questions during a live radio public affairs program monitored in Asaba, on Wednesday 29th June 2022.

Oghenesivbe said that the uncommon socioeconomic and infrastructure transformation witnessed in all sectors of the state economy under the incumbent governor and Vice Presidential candidate of PDP, Senator Dr. Ifeanyi Arthur Okowa, cannot be over-emphasized in electioneering political permutations ahead of the 2023 general elections.

The Eacgov noted that Delta State has made monumental progress in infrastructure and socio-economic development, and engendered peaceful coexistence among various communities and ethnic nationalities through substantial-good governance, with projects executed across the three senatorial districts in the state and counting.

He further asserted that PDP is the only party with grassroots political structures across the 25 local government areas in the State, while the opposition parties are generally scratching the surface, panting for breath and gasping for political oxygen for survival.

“I can tell you for free that our party, PDP, will crush the insignificant opposition parties in the forthcoming general election.

“Our governorship candidate, Oborevwori, is a unifier, politically solid, ready to serve, a competent technocrat and public administrator, a seasoned lawmaker, a humble and solid personality who is generally loved by the good people of Delta State and across the board.

“Rt Hon Sheriff Francis Oborevwori will defeat the candidates of the opposition parties with a wide margin. The signs are there. Gov Okowa’s remarkable achievements coupled with the political capacity, competence, and popularity of Oborevwori shall bring about a landslide victory for PDP in 2023.

The likes of Chief Great Ogboru of APGA, Senator Ovie Omo-Agege of APC, and Olorogun Kenneth Gbagi of SDP, are in the race to fulfill all righteousness.

“These other candidates of other political parties simply want to be referred to as former governorship candidates of this party or that party, but not to win the 2023 gubernatorial election in the state. Delta is predominantly a PDP state and the people are allergic to other parties. PDP is their party.

“The candidates of APC, APGA, and SDP are not prepared for the Guber race and no manifesto, which is a clear vindication that Oborevwori is thousands of miles ahead of others.

“Oborevwori is prepared, well equipped with the MORE agenda, and ready to serve, the good people of Delta State from 2023 to 2032,” Oghenesivbe added.