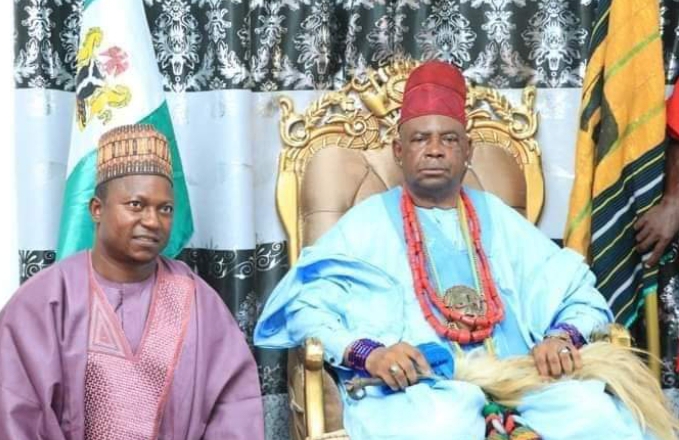 It was celebration galore as thousands of people from within and out side Kogi state converged on Idah on Thursday last week to rejoice with the Ata Igala, His Royal Majesty Chief Mathew Alaji Opaluwa Ogwuche Akpa, on the occasion of his one year anniversary of ascension to the throne of his ancestors.

Kogi state Governor Alhaji Yahaya Bello who was represented by the Commissioner for Culture and Tourism, Hon. Idachaba, congratulated the Ata Igala, His Royal Majesty Chief Mathew Alaji Opaluwa Ogwuche Akpa, on his one year anniversary of ascension to the throne of his ancestors and the entire residents of Igala Kingdom.

The Governor described the one year of the Monarch’s ascension to the throne as peaceful, successful, fruitful and remarkable, and equally admonished the Traditional Rulers in the state to mobilize their subjects for the peaceful conduct of the 2023 general election.

As part of the celebration marking the one year anniversary of Ata in Office, 21 prominent sons and daughters from Kogi state were conferred with Chieftaincy titles for their contributions to the development of their communities and humanity.

Among the new Chieftaincy title holders was the Rector of Kogi state Polytechnic, Dr. Salisu Usman Ogbo who was conferred with the title of Oma Oja.

The school administrator expressed his determination to transform the institution to the desired level and charged the staff to shun religious and tribal sentiment.

He said the Chieftaincy title given to him by the traditional council of Igala kingdom was borne out of his commitment and effort in transforming Kogi State Polytechnic Lokoja to be one of the best Polytechnic in the country.

“The award means a lot to me because it is an indication that some people some where are watching what we are doing at the Polytechnic. We thank God that we are able to make impact on the lives of the people and made contributions to our land and the nation at large.

“The award is an indication that we are doing well and a technical notice that we should endeavour to do more for humanity” he said.

Meanwhile, the Kogi State Council of the Nigeria Union of Journalists on Friday felicitated with the Rector on the conferment of chieftaincy title of Omaoja Ata Igala on him by His Royal Majesty, the Ata Igala.

In a statement issued by the Chairman of the union, Adeiza Momohjimoh and Secretary Ademu Seidu, described the Chieftaincy title as another well deserved feather in the cap of the workaholic Rector.

The statement said Dr Ogbo has since assumption of office as the Rector of the institution, demonstrated strong will and unwavering determination to reposition the institution.