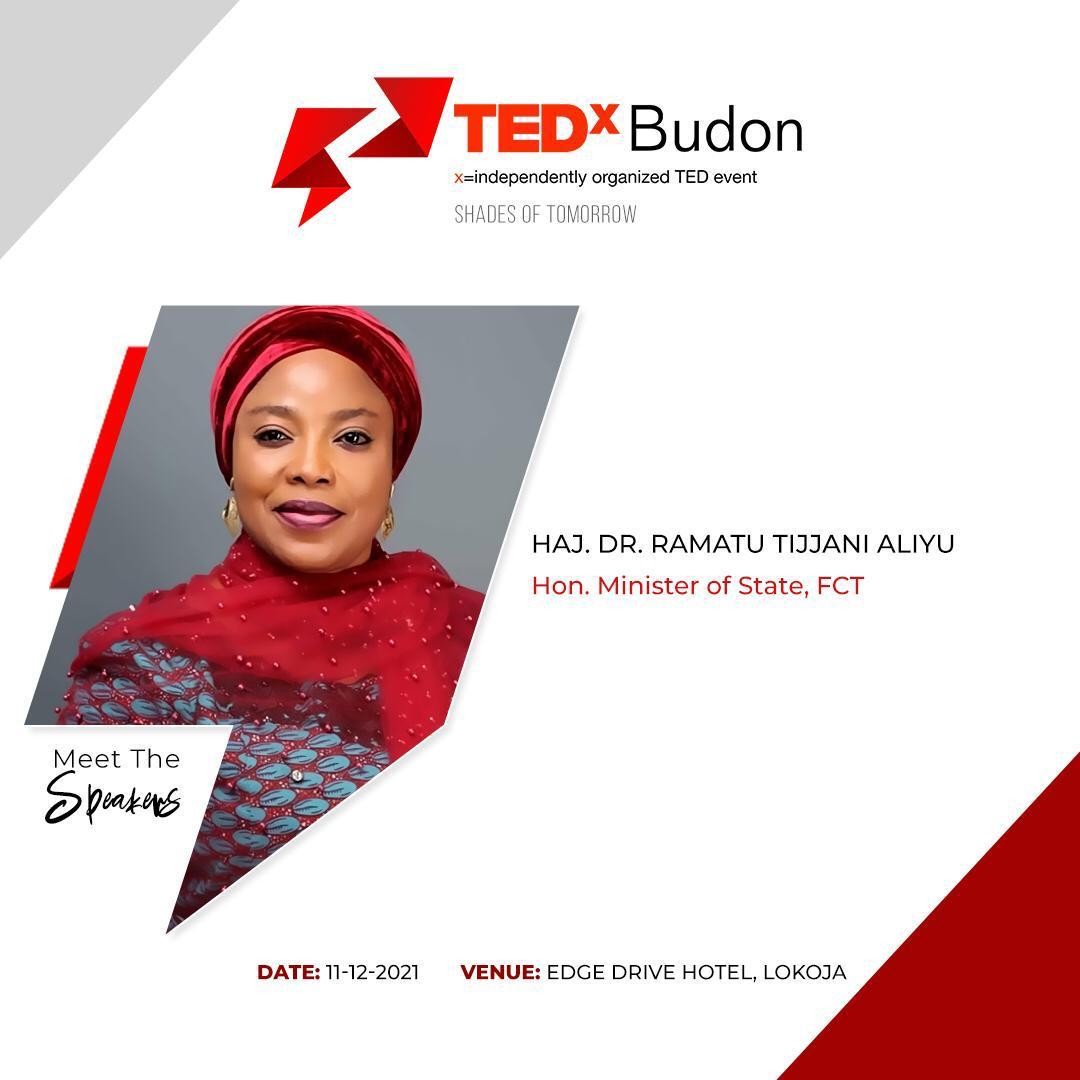 As the TedX Button event approaches, the Minister of State for the FCT, Hajiya Dr. Ramatu Tijani Aliyu is slated to be one of the speakers at the event.

This is contained in a refreshing press statement signed by the organizers which they made available to the media in Lokoja.

Her role as speaker in the first-ever TedX Button, named after her Community is aimed at impacting the local people and is expected to touch on motivational issues that would impact citizens positively, especially the genealogy, antecedents, and process of growth to ministerial status.

It is expected to also touch on many areas that involve Education, girl – child education among other things aimed at enlightening the public and challenging the many existing status quo.

According to the statement, other notable speakers are drawn from the public and private sectors, academia, youth, and students among others who would use personal experience to share on how adversities could be overcome.

READ:  Kogi Auditor General Felicitates with Ata Igala On One Year On The Throne OF His Fore-bearers

Haj. Dr. Ramatu Tijjani, nee Sidi, was born into the Royal family of late Alhaji Sidi Ali Mamman Bawa Allah of Button, Kogi State. She is an Alumni of Ahmadu Bello University, Zaria, where she obtained a Bachelor’s Degree in Urban and Regional Planning. she was later conferred with a Doctor of Public Administration honorary degree from the Prestigious Commonwealth University, London, United Kingdom.

Similarly, she earned another Certificate in Leadership Skills from the reputable Abbey College, London, also in the United Kingdom, and A Ph.D. holder in security and strategic studies from Nassarawa State University, Lafia.

READ:  Alia, The Church, Politics And Us

Also slated to speak at the event is Dr. Aminu Isa of the federal university Lokoja with Amb Nihi and Prof. A.B Ahmed of Bayero University Kano also penned down to present talks.

Originally standing for Technology, Entertainment and Design, TED has grown in acceptability and popularity all over the world and covers topics to include everything from politics to feminism, science, music, and business, and many others.

Notable individuals from within Kogi State and others from across Nigeria delivered talks in previous events in the state, taking cues from celebrities, Nobel Prize Winners, artists, politicians, and leaders in all sorts of industries to have given TED talks globally.

The goals of this nonprofit organization remain to provide nonpartisan educational content, seek out interesting people to speak and share their knowledge and passions that would impact society positively, start conversations on topical issues, and drive the development process for communities.

The theme of TEDx Button 2021 is; “Shades of Tomorrow’ and is aimed at providing an insight into the future as it relates to every aspect of the community. The event will use its international platforms to spotlight the challenges facing the button & Wakanda kingdom at large while placing it on the global map.

It will take place at Edgedrive Hotel Hall in Lokoja by 9 am on Saturday, 11th December 2021.

One thought on “FCT Minister of State, Dr. Ramatu Tijani to speak at TedX Button”