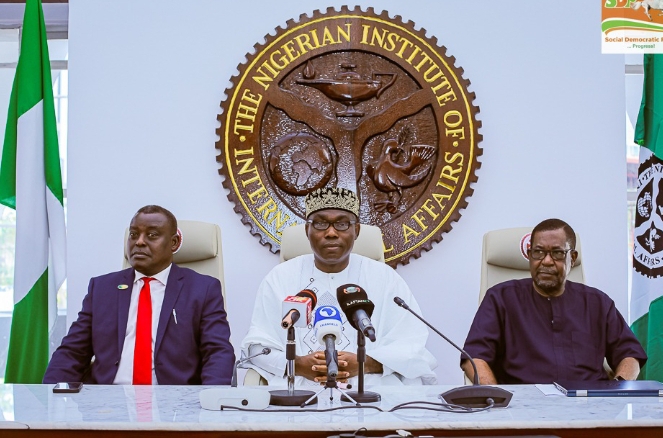 The presidential candidate of the Social Democratic Party (SDP), Barrister Adewole Adewole Adebayo, has explained that he deliberately shunned an invitation to appear at the Royal Institute of International Affairs, London popularly known as Chatham House.

Adebayo made the claim on Monday at the Nigerian Institute of International Affairs (NIIA) platform for 2023 presidential candidates held in Lagos.

Prince Adewole Adebayo at Nigerian Institute International Affairs (NIIA)
Adebayo said he decided not to go outside the shores of the country to speak to the electorates because he has high respect for Nigeria’s sovereignty.

The SDP flag-bearer lamented that Nigeria’s presidential candidates that were in Chatham House in London had, “further ridiculed and devalued the nation before the world by their appearances.”

He added, “NIIA was set up in 1961 exactly for this purpose that our foreign policy thinking should be scientific, strategical, well reasoned, well researched, and this institution has the legacy at the background and the capacity to advise you on what to say on the world stage.

“All over the world, before you go out to say anything about Nigeria or your country, you go to the premier diplomatic institute in your country and exchange ideas so that outsiders will understand that what you are saying is in tune with diplomatic policy and doctrines of your country.”

On what he will do if elected as Nigeria’s President, Adebayo said he would continue to abide by all international agreements signed and executed by the country.

Adebayo noted that he will make sure the finest of the finest represent the country internationally.

He further stressed, “Nigeria has more than enough to abolish poverty, and it must manage its sovereignty well and have full control of its land.

“I have been able to establish the fact that Nigeria’s Afrocentric foreign policy hasn’t brought reciprocal benefits to the country.

“It is noteworthy that the theoretical pathway to a beneficial foreign policy is the realist, power-focused school of thought and action.

“I want to submit that economic diplomacy, spelt out in clear terms, is the way forward if Nigeria would use foreign policy to advance its domestic priorities in the spheres of fighting poverty and ending insecurity.”

In his remarks, The Institute’s Director General, Professor Eghosa Osaghae said the world has opened its doors to Nigeria in recent times; hence, the need to sound out the candidates on what the candidates’ foreign policy agenda would be.

Professor Osaghae noted that Adebayo was the first of the candidates to honour the Institute’s invitation.