Biu; Sustaining The legacies of Professionalism In The FRSC.

Aug 8, 2022 Biu; Sustaining The legacies of Professionalism In The FRSC. 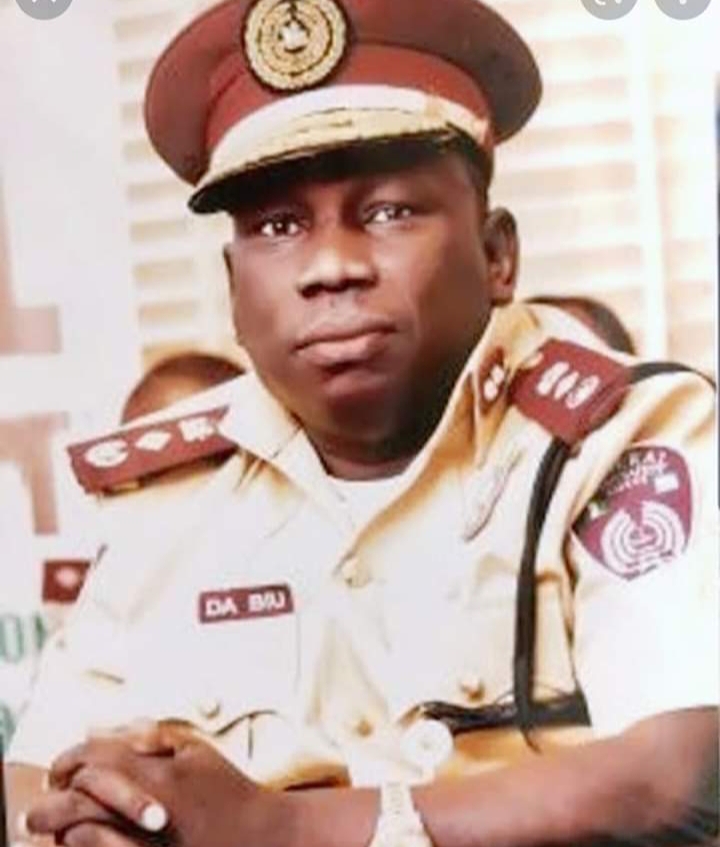 Oyeyemi who held forth at the agency for many years was formally pulled out of service to retirement, having attained the statutory age of service in Nigeria on July 24, 2022, in an enlarged ceremony held at Polo ground, Abuja.

Oyeyemi who rose through the cadre and joined the FRSC since its inception in the 80s became the first top echelon that was appointed by Goodluck Jonathan’s administration to ensure continuity and promotion of professional conduct and disposition in the Corps.

This came after many decades of its existence and was manned by both civilian and military administrators in line with the country’s leadership connotations then.

Conversant with the needs and requirements of his profession, for eight years, the former Corps Marshal Boboye Oyeyemi carried out a lot of reforms and internal reorientation that improved not only the working conditions of the Corps but professional disposition in line with the mandate of the paramilitary agency.

Having achieved so much in the Corps before his retirement last month, the appointment of Ag Corps Marshal, Dauda Aliu Biu was lauded not only within the commission but by many Nigerians as it is geared toward sustaining professionalism.

This was basically because the new leadership under Ag Corps Marshal, Dauda Aliu Biu was also coming from the same foundation products of the commission, as he rose through the cadre to the current position.

The President’s choice of Ag Corps Marshal, Dauda Aliu Biu was to sustain the reforms already carried out by former Corps Marshal, Boboye Oyeyemi and to also introduce more reforms that will affect positively the operations of the Federal Roads Safety Commission FRSC in Nigeria.

Already, the new Ag Corps Marshal had set the ball rolling having met the zonal commanders through virtual on the need to improve on professional approach and warned against continuous incivility in the conduct of the operatives across the country among many others.

Biu, also handed down instructions across the commission in the country to ensure all motorcycles in Nigeria are formally registered with registration no’s attached to every motorcycle.

This decision and resolution of Ag Corps Marshal, Dauda Aliu Biu was very crucial in arresting the continuous cases of banditry, kidnappings, and terrorist attacks going on across the country.

There is no doubt that over 90% of motorcycles operating both private and commercial have no plate numbers, a situation that will be difficult to check the offenders and offenses of motorcycles riders across the country.

This is coming at a time when the non-state actors and attacks from bandits, kidnappings, and terrorists deployed motorcycles into carrying out their nefarious activities across the states of Nigeria.

The recent Kuje prison attack was confirmed to be carried out by bandits and terrorists that came on over 300 new motorcycles and stormed the environment to carry out their anti-people activities.

Aside from bandits, kidnappings, and terrorists deploying auto bikes to prosecute their activities, most crimes being committed in the country are aided by motorcycles without easy ways of identification across the country.

The ball is now in the court of state and zonal commanders to oblige the instructions of the new Ag Corps Marshal, Dauda Aliu Biu not only to ensure they carried plate numbers for easy identification but to regulate their activities across the country to curb the growing insecurity in Nigeria.

The bulk of users of motorcycles are responsible for the growing criminal activities going around, therefore when properly registered can be traced easily with the new mode/ software deployed in tracking dissidents’ motorcycles and vehicles by the commission.

READ:  "We are pleased with Jerry Uzosike, he deserves second term in office" - Abia Group

The decision was coming at a time when the federal government was considering banning the use of motorcycles in Nigeria, as t are being misused into carrying out criminal and all sorts of criminalities across the country.

Official and formal registration and numbered motorcycles will be reduced to the barest minimum the current unfortunate incidence, that had thrown the country into a tumultuous environment due to growing insecurity.

These, among many other decisions to be taken over time by the new leadership, will be unfolded with the ascension of a professional with internal reorientation and acquaintance over the decades in the commission.

There is no doubt, that the new leadership of the commission under Ag Corps Marshal, Dauda Aliu Biu is determined to promote discipline, professionalism, and civil interaction, as well as introduced more reforms including the sustenance of the ongoing reforms in the Federal Roads Safety Commission FRSC in Nigeria.

The appointment was the right step in the right direction by President Muhammadu Buhari, as more programs and policies will be unfolded by the current leadership towards the management of our roads in the country.

Yusuf, A Public Affairs Analyst, Writes From Abuja, All inquiries to yus.abubakar3@gmail.com.